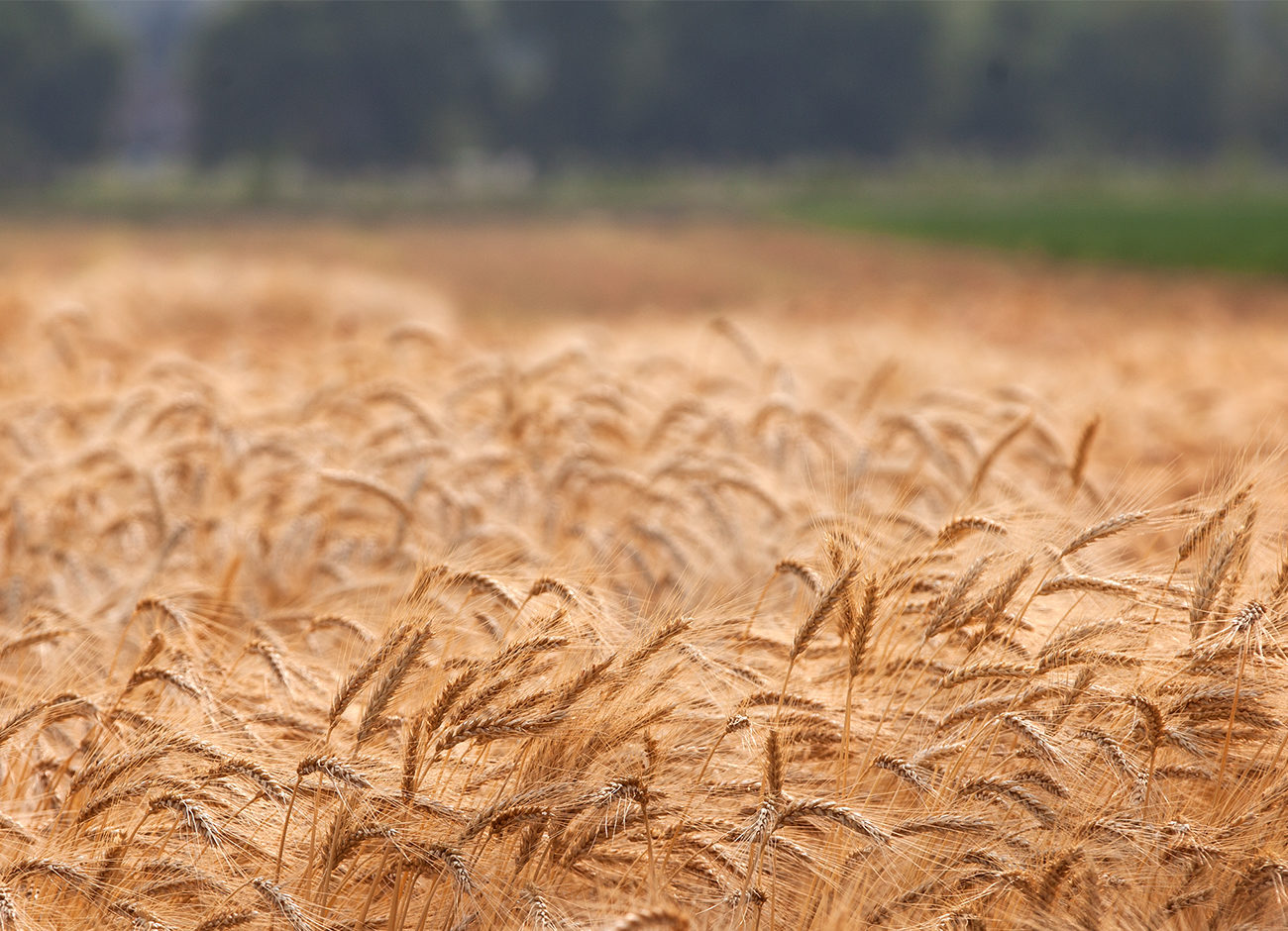 The samples contained wild einkorn—an ancestor of modern wheat. The bread-like discs were likely not an everyday foodstuff for the hunter-gatherers. But in the centuries since, wheat has become the most widely grown cereal crop in the world. That’s why researchers at Utah State University are working to protect the global wheat supply.

David Hole pulls on a pair of rubber boots and climbs into a pickup with the bumper sticker “wheat fleet” stamped on the back. He steers toward the rain-soaked fields he has overseen for nearly 30 years. He parks between rows of wheat stalks standing like sentinels under the gray sky. They represent many lifetimes of work.

“This has been owned by the university for close to 100 years,” Hole says. “The reason this program started back in the twenties was because of this disease called dwarf bunt.”

He walks through the diseased portion of the nursery and selects a puffy head of blighted wheat. This is what can happen with this disease, he says crumbling the head between his fingers. “You can see virtually 100 percent infection here. There’s no seed in here at all. It’s just a mass of spores, maybe 20 to 30 million spores there.”

The spores germinate under snow-cover, infect through a stomate in the seedling, and grow with the plant for the rest of the year. Dwarf bunt is similar to common bunt, a different species that produces the same result: a smutted head that smells the same, looks the same, and decimates production. They are so closely related that resistance to dwarf bunt means resistance to common bunt.

“In the 1920s, 80 percent of the rail cars arriving in Ogden were rating as smutty,” says Hole, professor of plant breeding at USU. “Now we have a generation of farmers who have grown up without ever really seeing a smut. I’ve got a picture in my office of a combine going through a field that looks like it is on fire—just smoke billowing out the back. That’s the classic image of what harvesting a field like that looks like.”

Historically, farmers around the world struggled with common bunt until seed treatments emerged that could prevent infections. A rise in organic wheat farming has shown that a comeback is possible. Hole can plant a variety of wheat called Cache, which is susceptible to common bunt, on a farmer’s nursery that has grown nothing but resistant varieties for 40 years, and in the right conditions, some smut will develop, he says. “That indicates that there are still some spores there. Every year they are germinating.”

Yet, for the last 50 years, nobody has done research on bunt resistance to speak of, Hole says. “We do it because there is one chemical that will control dwarf bunt and I just decided when I got here that one single fungicide treatment that lasts long enough to protect against dwarf bunt is not enough and I’d rather provide our growers with genetic resistance.”

Every year he plants hundreds of lines of wheat in Box Elder County at the university’s primary dryland nursery and on test plots from Monticello through southern Idaho. A number of lines are experimental crosses cultivated for disease resistance and ideal traits for production. It’s a process that takes time—years really—with no guarantee that one might hit the mark. Nearly half of the varieties in USU’s century plot are from breeders around the country and overseas that Hole’s team evaluates. 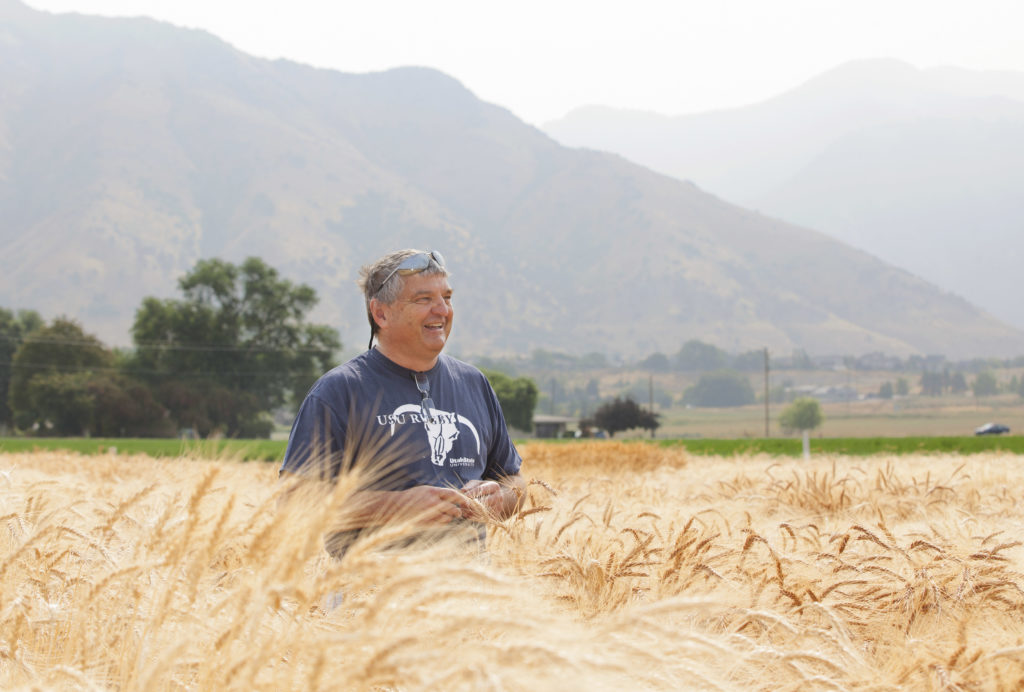 “It’s a service that I think is really important,” Hole says. “The more resistant genes that we can get into varieties around the world altogether, the better our food security is.

Ancient growers saved seed, selecting heads with the best qualities to sow the next season. Plant breeders today continue this practice, but with a greater knowledge of genetics. In 2018, researchers made headlines for mapping the wheat genome. However, the genetics remain difficult to unravel, partly because wheat is an oddity in nature that emerged at the end of the last ice age.

“It’s a natural hybrid between three different species, not all of them even exist anymore,” Hole says. “It has three complete sets of chromosomes—we call it a hexaploid—three pairs from those three species.”

Hole leans over to inspect a blighted head. “To see something like this here, essentially every head in that plant in that row is infected and right next to it,” he points to a pristine row directly across from it. “One gene. That’s the difference in one gene.”

Hole allows one to two percent of heads to have a low level of infection present. In fact, he wants plant genes to be a little leaky to cut down on the strong selection for new fungal races. Low infection rates mean competition between a fungus and plant is occurring, and that, for now, the plant is winning. The battle plays out every season and plant breeders are constantly searching to gain the upper hand.

In the 1970s, one variety of wheat was found near the Syrian border that remained the only source of resistance for decades, Hole says. “Then a new race showed up in Idaho. So we found another gene and we started incorporating that.” To have one region of the world that produces disease resistance can leave one with an unsettling feeling.

“We are wildly aware of that,” Hole says. “That is one of the reasons that we screen this germplasm and why all breeders have this kind of manic feeling that we really have to protect germplasm. “What are the top three crops we eat in the world? Rice. Wheat. And corn. That’s about 80 percent of our calories worldwide. They are all grasses. They are all reasonably closely related. That’s a pretty narrow genetic dice to be staking 80 percent of our calorie intake on. We pretty much owe our civilization to three grasses.”

Humankind has heard starvation is nigh throughout history. In 1798, T. Robert Malthus predicted human population growth would surpass its ability to feed itself. Mechanized agriculture proved otherwise. Agricultural advancements, particularly in wheat production, during green revolution of the 1950s and 60s are credited with saving 1 billion people from starvation. Change, it seems, is the ballgame. There are changes in diseases. Changes in wheat strains. Changes in climate. In pests. Standing still is not an option.

Hole warns that there are some fungicides growers can no longer use. As we’ve sprayed fungicides on crops, the spores that could survive have—and they continue to reproduce. “We have to be careful. Herbicides are the same way,” he says.

An hour later, the sun has burned off the clouds and the conversation turns philosophical. Population estimates suggest the world’s wheat supply needs to double to keep pace. Hole sees promise in conventional plant breeding and in molecular biology—in GMO; he’s just disappointed we haven’t made greater strides. “We were told that by now we would see plants that could grow with almost no water and we don’t,” he says. “Turns out it’s a lot more complicated than we thought it was.”

About 20 years ago, Thomas Chang, a chemist at USU, was researching compounds for antibacterial resistance when he had an idea—perhaps his collection might contain antifungal agents. He approached Jon Takemoto, a microbiologist at USU, and offered his library of compounds for screening. Takemoto immediately recognized similarities to antifungal compounds he had analyzed and could imagine how they might work using a novel mechanism. 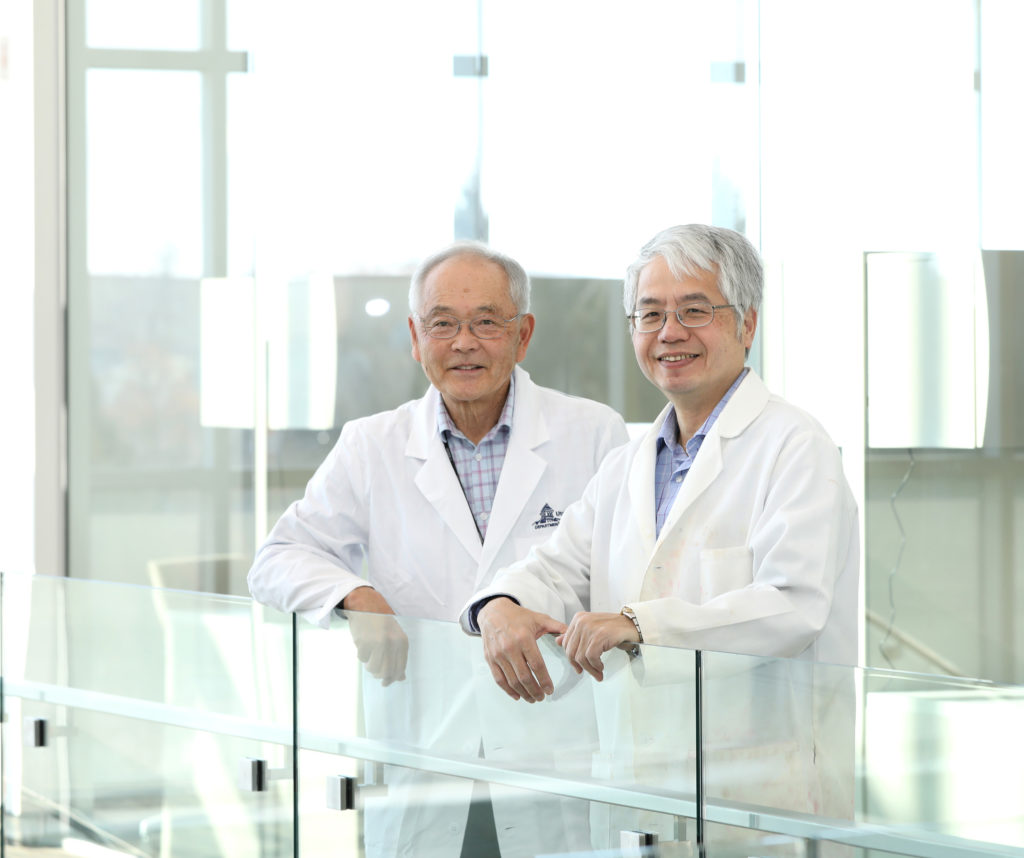 “It makes holes or pores in membranes,” Takemoto says. “The previously known antifungal agents that everybody uses in medicine and agriculture don’t work by poking holes in membranes. There are two or three classes of fungicides and they all work a little differently.”

Some function by binding to ergosterol, a cholesterol-like compound present in fungi, while other fungicides inhibit ergosterol synthesis. However, these chemicals can also bind to cholesterol found in animal cells, which can be quite toxic to people and wildlife, Takemoto says. “The compounds Tom makes don’t bind to ergosterol. They bind another set of lipid—sphingolipids. Fungi have a unique set that are different from animals or plants. Bacteria do not have sphingolipids. That accounts for the specificity.”

Since the two researchers began examining potential “green” pathways for new fungicides and medicines, they recently found one that can be used to combat wheat blight caused by Fusarium graminearum, a pathogen that infects cereals including wheat and barley.

“It’s a huge problem,” Chang says, explaining that the blight not only affects agricultural yields, but it produces a toxin that can make people sick—very sick.

“The big problem with this disease is the production of a toxin called vomitoxin,” Takemoto says. “It’s very descriptive. It tells you exactly what happens if you (or animals) ingest wheat that is heavily infected.”

That’s why the U.S. Department of Agriculture monitors for this disease, as well as beer manufacturers and wheat importers like China—no one wants vomitoxin in their products. And resistance to conventional fungicide makes it harder to control. When fungi develop resistance to a fungicide, similar to antibiotic resistance, people need to use more and in higher doses—this can create another set of problems for environmental and human health, Chang says. One concern is that pathogens may jump from plants to humans. “In the anti-fungal world, that’s already happening,” he says.

Most crop diseases are fungal diseases and resistance to fungicides gets passed down genetically. This happens quicker than people think. That’s why a new fungicide created by Chang and Takemoto called K20 could represent a path forward. Studies of K20 have found it nontoxic in animal models. While organisms developing resistance to fungicides will always be a concern, Chang says, it is unlikely to occur in K20. “We don’t expect resistance at this point.”

That’s because K20 works by poking a hole in the fungi’s membrane, much like slashing a tire and letting the air out. “In order to develop resistance you have to change the membrane function and structure,” Takemoto explains. “It’s just hard for it to do that without dying.”

But disease is only part of the conversation about wheat. USU’s David Britt and an interdisciplinary team of scientists and engineers are leading promising new research into another culprit that threatens this globally important food crop: drought.

populations are competing for arable land and water supplies. Drought-tolerant plants and improved crop management practices, experts say, will be the cornerstone of maintaining agricultural productivity.

In nature, plants co-exist with a variety of beneficial microbes that colonize their root zones. These zones, known as the rhizosphere, are a primary source of bacteria promoting plant growth. Research from Britt’s tam demonstrates that complex interactions between microbes, the root zone, and micronutrients contribute to a plant’s drought tolerance.

“Plants in native soils exist as an ecosystem involving associations with a variety of microbes,” says Britt. “These microbes influence plant health, most notably when plants develop disease or in response to environmental challenges such as drought.”

Britt’s team is focused on understanding how wheat plants and their root-colonizing bacteria respond to stimulatory doses of nanoparticles. By simulating drought conditions in a greenhouse test, the researchers will investigate whether nano-scale nutrients can enhance the production drought-protective and other beneficial compounds.