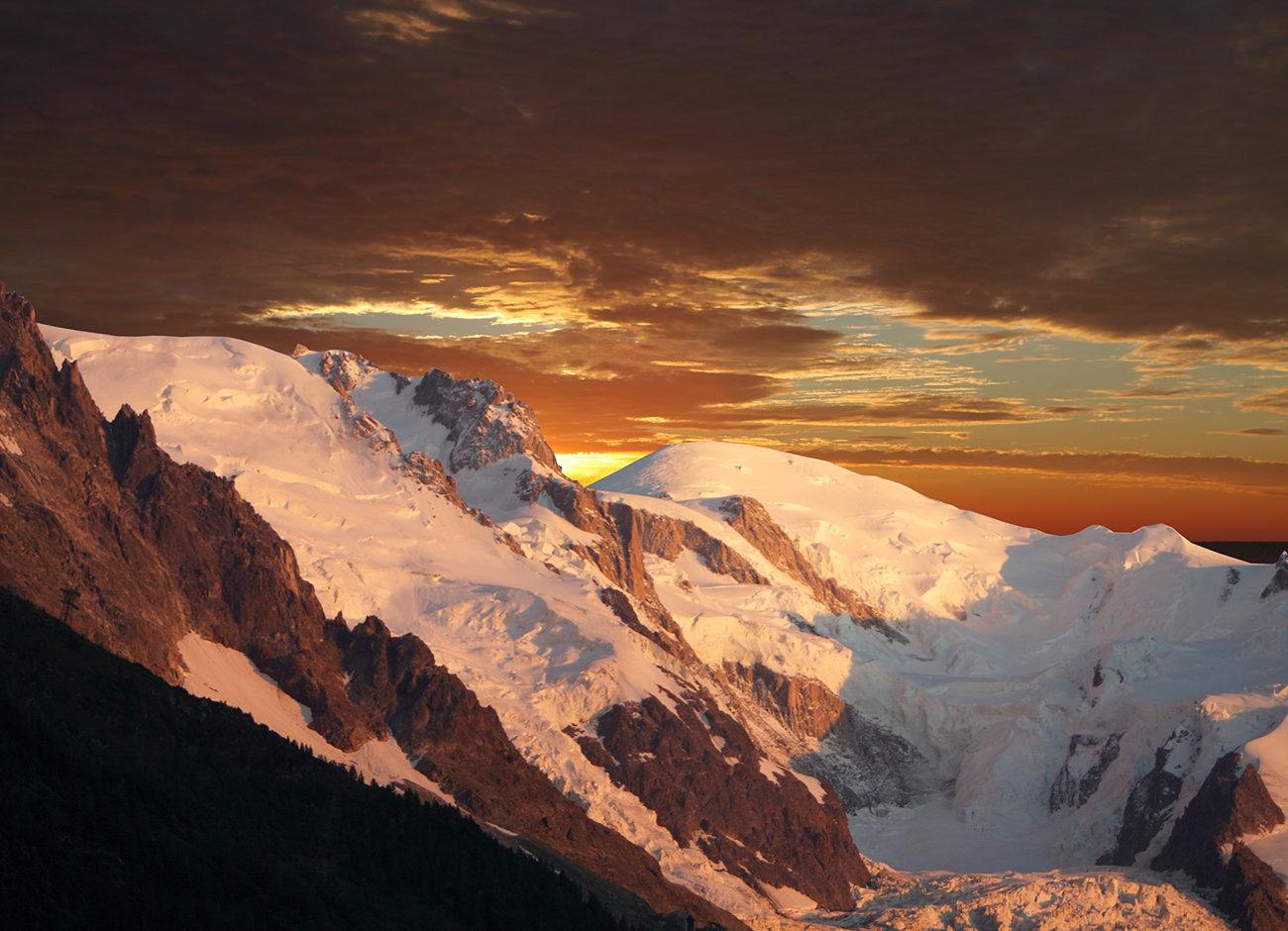 Excerpt from The Traveling Feast:
On the Road and At the Table with My Heroes

Rick Bass spent four years on the road paying homage to literary giants the best way he knew how: by preparing a home-cooked meal. He visited writers such as Doug Peacock, Gary Snyder, Peter Matthiessen, and David Sedaris. The following excerpt is from the dinner Bass cooked for the novelist John Berger.

Pie time. Ideally we wouldn’t have eaten quite so much before serving dessert, but so be it. In anticipation, John, our faithful sommelier, rises and navigates the long table once more, refilling glasses, the wine like rich paint in our sunlit crystal goblets. He places his hand on each of our shoulders as he pours, trembling not with age, it seems, but joy. He sits back down at the head of the table, just to my left—Yves is at the other end—and I can’t resist letting loose the question I’ve been carrying around and trying to ask each of my mentors, timing be damned.

“I’m here to share you, my hero, with these two young writers I believe in deeply,” I tell John. “But I’m also here for myself. What do I need?” I ask him. “What will life look like, from here on out?”

If he was unprepared for such an earnest question, or considers it a gauche imposition, he does not show it. And although the timbre of my voice is casual and the words are not arranged with any particular gravity or elegance, he recognizes the intensity behind the calm. He locks my eyes with his own: those icy, unclouded blue eyes, translucent in their depthlessness, unsettling if they weren’t so beautiful.

“Courage,” he says. His answer has such emotion in it: firmness, understanding, and gentleness, with more sorrow in his voice than I would have expected. “Courage,” he repeats, not as incantation, but as echo, a shadow of the first utterance. As if the word, the thing, is so substantial that it has that shadow at all times.

Something’s passing between us, and I can’t help but wonder if he’s remembering standing where I am, at a point in time where he still—despite some significant years having passed by—had the opportunity to make a change, maybe a dramatic one, with his life. Is that what brought him to this farmhouse in the mountains, with a few peasant farmers for neighbors, and the freedom of anonymity?

“You come to a spot,” he says, leaning forward—his eyes still have not list their lock on mine, so that I feel like a horse being gentled—“and you make the hard decisions to go on.” His eyes bore deeper now, telling me that he’s been where I am. “It’s hard,” he says. “Not many do. That’s all I am going to say.” He straightens up in his chair, holds my gaze long enough to imprint these things, and then we speak of it no more.

After that, the conversation shifts in tone, takes on even more depth. At the other end of the table, Yves is talking about the differences between store-bought meat and animals acquired by oneself, whether hunted or raised, and specifically about a pig he raised a full year for slaughter, and the ceremony of the day they killed it.

He speaks of the gratitude they felt for it, and how every step of the process—the cleaning and butchering, then the curing—was done with the attentiveness of art. He uses the word sacred. Before eating, they passed around the knife that had been used to kill the pig. The same knife they then used to carve the meat. “It was very special,” he says in his quiet way. “Very moving.”

I tell the story of the elk we have just consumed, how it stood at the top of the mountain, in the sunlight, while I was hiking up out of the valley’s autumnal fog—how the elk was poised at the leading edge of that fog, as if it were a lake to which he’d come to water. I could see him on the other side, as the fog tendrils began to burn away in the light of the day, though he could not make out what I was. I raised the rifle and took him, and was grateful. I spent days afterward cleaning, butchering, and packing him out, while in subsequent days ravens and eagles circled what remained, coming in to feed on the bones, and after I was gone and had taken everything, bears and wolves came and carried away the bones. I froze the meat, and now, a year later, have carried it to John.

John excuses himself from the table, disappears into the back room, and returns with a large envelope. It’s the loose galley pages of a book Yves and John have written together: Flying Skirts, which was Beverly’s nickname. John hands the package to Yves, and Yves, with even greater care than his father, pulls out the pages, the loose pieces that will be sewn and bound into the book, not bringing Beverly back to life, but fanning her spirit back into their lives.

Yves delivers the book to me with both hands. I take it in my open arms like a tablet, and, making sure that my hands are spotless, begin turning the pages.

It’s as if everyone’s heart slows and there is nothing beyond these mountains, this meal, no world beyond this one.

I read some of the vignettes: concise, elegant, raw but without lamentation. In one of them John writes about how she informed the pages of his work, and hence his life.

Each piece is more beautiful and intense than the last. It’s too intense. I fold the pages, hand them back to Yves with an apology. “It’s too much for me at once,” I tell them both. “It’s so beautiful. I’d like to read it while I’m alone, if I might.”

They understand, and the envelope is carried away.

But like a tide, and as graceful, John begins to churn the heart’s country below. He goes to his room once more and returns with a poem. “Carrying the Songs,” by Moya Cannon, an Irish poet with whom he’s been corresponding. He reads it beautifully, his rich voice deepening to a gentle but powerful baritone. It’s an actor’s voice, Shakespearean—and though there is no brogue, somehow it feels, sounds, Irish.

We all sit quietly. He has cast a trance upon our hearts.

I’m still thinking about the answer I got from him, my treasure. Does he know of the drift in my life, the severance? Has Marc told him? I’m not sure, but it wouldn’t surprise me at all if he knew things without their ever being spoken.

“You have such a beautiful reading voice,” Erin says, and I love how John is neither self-deprecating nor its close cousin, vain. He just smiles, pleased by her happiness.

He sits back down at the head of the table, clears his throat, dons his reading glasses, adjusts them as might a hunter examining the optics of his scope, thumbs through the pages of one of his books, and then seems to relax, finding what he was searching for. As he reads a passage from Bento’s Sketchbook, about a character named Bento (a diminutive of the philosopher Spinoza’s first name) in a municipal swimming pool, we sit mesmerized and sheltered beneath his voice. I listen to his breath and imagine how it must have been when he joined these words and sentences together, the slow-rolling sound waves that bring the story into us. He finishes and sits back, happy again with our silence, and only now, for the first time, does he look even the least bit fatigued.

He pours more wine for us and then goes back to his room. After we finish it, the rest of us walk outside and climb the wooden ladder to Yves’s painting loft. The ladder goes straight up, vertical rung-and-rail nailed to the side of the barn. We pop into the loft, walk past the hay bales, which glow in the late-afternoon attic light, and across the wide planks to the studio.

When we open the door we are greeted by the smell of paint and a flood of white light, along with an extravagance of easels and canvases, cans of soaking brushes of all sizes and lengths. And the mountain. Always the mountain.

The most famous peak in Europe, the iconic Mont Blanc—the wild soul of Europe, or what’s left of its wild soul. Of course these two men, father and son, would live at its flanks, milking that wildness from it each day and night. Of course their family has settled here as the outside world slips into the future. Mont Blanc fills the huge window. One cannot prepare for opening a door and stepping into a small room in which is housed an entire mountain, much less that mountain.

I worry that I can’t properly describe Yves’s paintings. I don’t have John’s facility for art criticism, after all. If I use the word figures—apparitions—coupled with the adjective abstract, the mind drifts away from rather than toward the subject. The paintings are thickly textured, in hues of smoke—blue, gray, purple, black, eggplant, mauve—and would seem to have nothing to do with Mont Blanc, which, I realize now, is the point. It is Yves’ knowledge of the view when his back is turned to the mountain that lets him go wherever he wants in his painting. The mountain will always be there when he turns around.

His counter space, and every scrap of wall space, are filled with talismans: shells, nests, feathers, bones, stones, and myriad pictures, including photographs of his parents when they were young and brimming with verve. Looking at the pictures of John then—in a sedan outside a restaurant, smoking a cigarette, or on a motorcycle on a country lane in the fall—one understands why he is still as powerful as he is. Such a light can never completely go out.

To read more about the book or purchase a copy visit https://www.littlebrown.com/titles/rick-bass/the-traveling-feast/9780316381192/