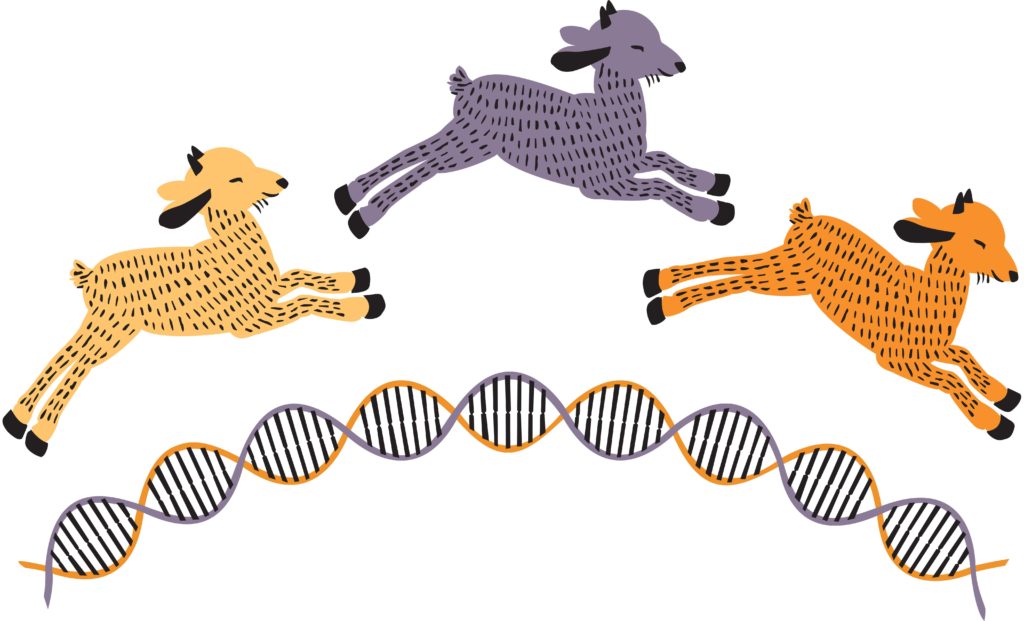 The sheep and goats at Utah State University’s Animal Science Farm don’t look extraordinary, and the barns and pastures where they live don’t look like most people’s idea of a laboratory. But make no mistake, many of the small ruminants at the farm are important in efforts to solve big problems like global food insecurity and an array of human diseases.

“We are combining genome-editing technology with our ability to clone animals for a variety of biomedical and agricultural applications,” says Irina Polejaeva, USU professor of developmental biology.

Sheep and goats may not seem like large animals to most people, but they are substantially larger than the most widely used laboratory animals–mice. There are benefits to research with large animals, for example, their organs are similar in size to those in humans. At USU, the facilities to care for and house large animals is combined with expertise in gene-editing and animal reproduction that have major impacts well beyond Utah.

USU President Noelle Cockett’s research is known worldwide among animal geneticists, particularly those who focus on sheep. She led an international team that sequenced the sheep genome. Much of Cockett’s earlier work focused on a genetic mutation called callipyge that results in some sheep having more heavily muscled hind quarters. A research team in USU’s Department of Animal, Dairy and Veterinary Sciences, including Cockett, is working to genetically engineer goats and introduce the callipyge gmutation because more muscle―an estimated 30 to 40 percent more―is a valuable trait when the goal is to provide much-needed protein in parts of the world where people have little to eat.

“Goats are already the main protein source in many developing countries,” Polejaeva says. “They are more heat tolerant than cattle and survive on poor diets in places where cattle and sheep don’t do well. In parts of Africa and Southeast Asia there are also parasites and diseases that take a toll on the health of many animals, and we can select genes related to parasite and disease resistance.”

Scientists can identify the functions of specific genes and selectively modify (edit) them in a cell’s DNA. The resulting cell colony is sequenced to confirm whether or not the desired gene was successfully modified, and if so, used to produce a cloned embryo that develops in vitro and can be implanted in a female surrogate goat. This kind of gene editing is sometimes described as the biological version of a word processor’s “find and replace” tool. Once the new DNA sequence is inserted, it continues to replicate and offspring should have the selected traits. Conversely, imagine the possibilities of being able to prevent debilitating genetic diseases by disrupting the genes that cause them prior to conception.

“One example could be making a cow without the gene that is responsible for prion proteins,” Polejaeva says. “The misfolding of prion proteins causes mad cow disease, so we would have created an animal that is not susceptible to the disease. By introducing disease resistance traits we would make animals healthier and that is a benefit to mankind and to animals.”

In addition, introducing or deleting genes for specific traits substantially shortens the time involved to achieve the targeted trait as opposed to breeding five or six generations and likely breeding out other desirable traits through those generations.

Polejaeva was drawn to animal science after spending time at her grandmother’s small farm in Tuva, a region of lakes, forests, and mountains south of Siberia on the border of Mongolia.

“She had horses, a cow, sheep, and pigs, and chickens,” Polejeava recalls. “It supported the family, and she raised three kids by herself because my grandfather died in the Second World War. She was a very strong woman, and it started my interest in animals because it was so much fun to be on the farm.”

Polejeava earned a master’s degree in animal science, but her path to genetic engineering began with a wish to read something scientific when she was 6 months into a 3-year maternity leave and caring for her infant daughter. The book was Mammalian Chimaeras, and far from being a “How To” book for creating a physical realization of the fire-breathing mythological beast with a lion’s body, goat’s head, and tail like a serpent, the book was about scientists combining cells from two different kinds of mouse embryos and the resulting mice. That book and more study led to her PhD in developmental and stem cell biology and being part of the team that generated the world’s first cloned pigs. 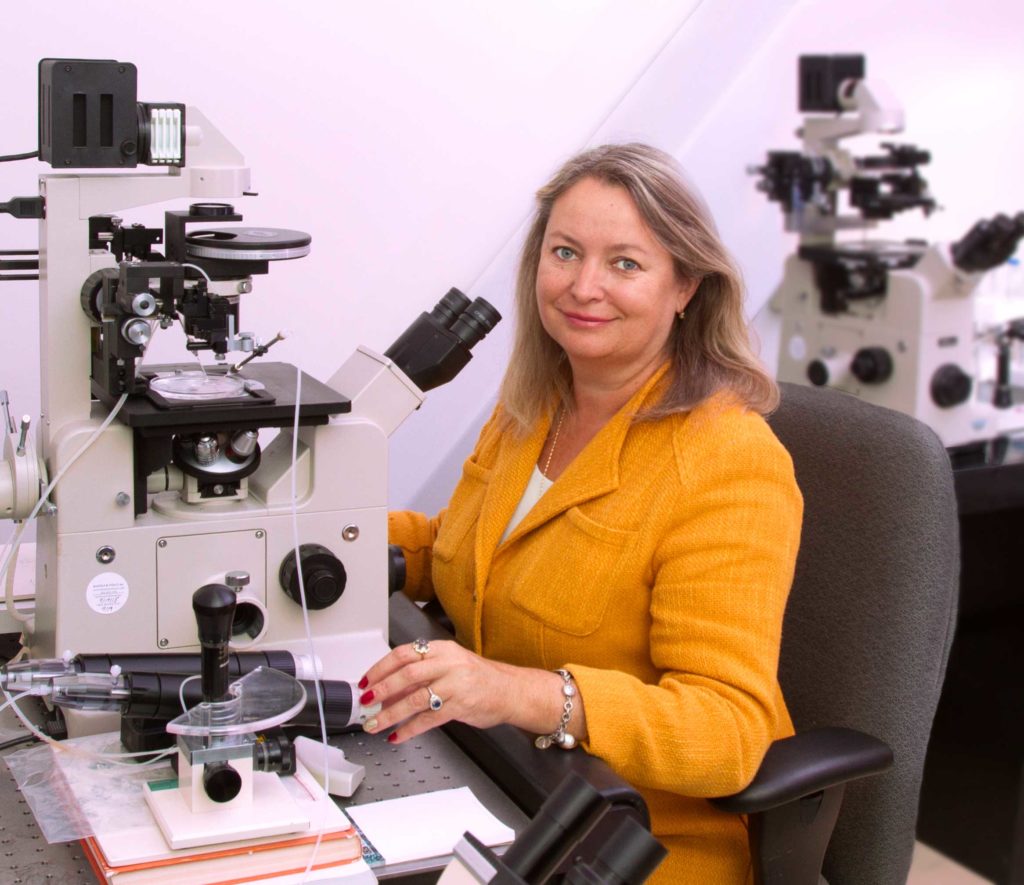 Irina Polejaeva, professor of developmental biology, became interested in genetic engineering after reading a book on the subject while on maternity leave in Russia.

Polejaeva says it is still amazing that although differentiated, cells can still be reprogrammed.

“If you find a text book from before 1996 it would say once a cell has differentiated it is committed to a specific fate by becoming a skin cell, or a muscle cell, for example, and it cannot reverse its fate and become embryonic,” she says. “The dogma of developmental biology was shattered and we learned we could change the fate of a totally differentiated cell.”

Polejaeva says the process is not always perfect, but scientists are learning more all the time in their own labs and from each other.

Polejaeva notes that people are sometimes uncomfortable or even adamantly opposed to genetic engineering, and asks, rhetorically, “Why don’t we worry about genetically modified animals? Well, people need to remember that exposure to ordinary things in the environment modifies the genetic material in all living organisms all the time. We are just introducing very specific genes and we know what their function is, what they are responsible for doing.

In the case of the goats in our agricultural work, callipyge does not occur naturally in goats, but it is not uncommon in their very close ‘cousins,’ sheep, and there are no side effects from introducing that genetic modification in goats.”

Biomedical research is also moving forward on tiny hooves at the research farm. One goat in particular, named Lilly Star, who produces fully human antibodies as an immune response, could be part of a newly refined way to use animals to battle infectious diseases in humans. She is a healthy year-and-a-half old and will be bred in hopes that her offspring also produce human antibodies. Lilly Star is the result of work by USU researchers and she belongs to Utah-based company SAB Capra whose president and CEO, Eddie Sullivan, earned his PhD attended USU. SAB Capra is an offshoot of Sullivan’s, SAB Biotherapeutics, in South Dakota which developed a method for producing human antibodies in cattle.

Transferring immunity from animals to humans has gone on for well over a century. Among the best-known uses of animals in immunotherapy was in 1890 when scientists found that horses injected with small amounts of diphtheria bacteria produced antibodies as an immune response to fight the infection. Diphtheria is highly contagious and, according to sources at the National Library of Medicine, was known as “the scourge of childhood” as it “simultaneously poisoned the victim and slowly suffocated him or her as the bacteria grew into a thick film in the throat.” Blood was drawn from “diphtheria horses” and the serum was purified and used to cure the disease in humans.

Injecting the refined serum introduces antibodies to fight disease, but there are downsides to the method because some people have adverse reactions to animal-derived antibodies. SAB’s approach avoids that pitfall because their genetically engineered animals produce fully human antibodies when exposed to a disease-causing agent. SAB has a herd of cattle at its South Dakota “pharm,” and treatments are in clinical trials funded by the National Institutes of Health: one to be used against influenza and one for treating Middle East Respiratory Syndrome Coronavirus, commonly known as MERS, a global health threat. The clinical trials are the first time human antibodies produced in cattle have been injected into humans.

“Gene editing tools make immunotherapy very promising for treating cancers and infectious diseases, Polejaeva says. “Goats are excellent candidates for aiding personalized medicine and public health because they are cheaper to produce and care for than cattle, have a shorter gestation period, and a goat’s immune system matures more quickly than a cows’.”

Goats are also helping researchers understand the causes of some diseases, which is a critical step in developing ways to treat or prevent them. Polejaeva and USU colleagues have worked for several years with scholars at the University of Utah to better understand atrial fibrillation (AF), the most common kind of irregular heartbeat. The Centers for Disease Control and Prevention estimates that as many as 6.1 million people in the United States have AF, and it frequently leads to more serious disease and health problems, including strokes and heart failure.

The research included surgeries to implant pacemakers in several goats, some that had been genetically modified to develop more fibrous heart tissue and others that were not. Current U.S. Food and Drug Administration regulations require the effectiveness of medical devices proposed for use in humans—a pacemaker, for example—first be validated in animals.

“The animals don’t have to be genetically modified,” Polejaeva explains, “But if animals can’t have the disease that occurs in humans, the tests will not be as meaningful and accurate because the animals have normal heart function.” 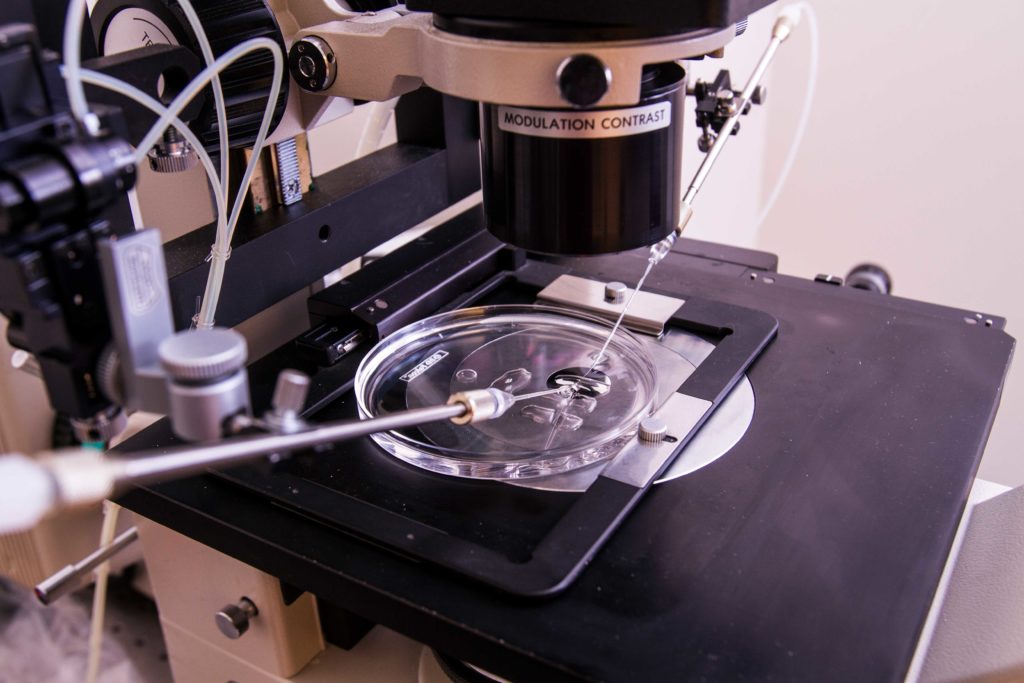 The goats in Irina Polejaeva’s lab are genetically-modified to aid scientists in their search to treat infectious diseases in humans.

The pacemakers did not regulate the goats’ heartrates, but continuously monitored each goat’s heart function. In a study of the effects of strenuous exercise, the goats spent varying amounts of time in a hot walker, typically used to exercise horses at different speeds. The goats built up to walking briskly for 90 minutes, five time a week, as their hearts were monitored. Polejaeva says it is the only study the researchers have found spontaneous episodes of AF in animals.

Another dangerous disease, cystic fibrosis (CF), is also being studied in genetically modified sheep. In humans, CF occurs when parents who may appear healthy both have the recessive gene, and when those genes come together at conception there is a great chance their children will have CF.

Because the disease begins during gestation, the hope is a gene therapy tool can be created to stop CF from developing. Researchers know that a specific gene affects a protein that ultimately causes the disease. Polejaeva and collaborators, including Ann Harris, a molecular geneticist at Case Western Reserve University, are working to understand exactly when the disease starts, how it progresses, and at what stage gene therapy would be most effective.