Home / Look Back  / A Lick Back: Warming Up to Aggie Ice Cream

A Lick Back: Warming Up to Aggie Ice Cream 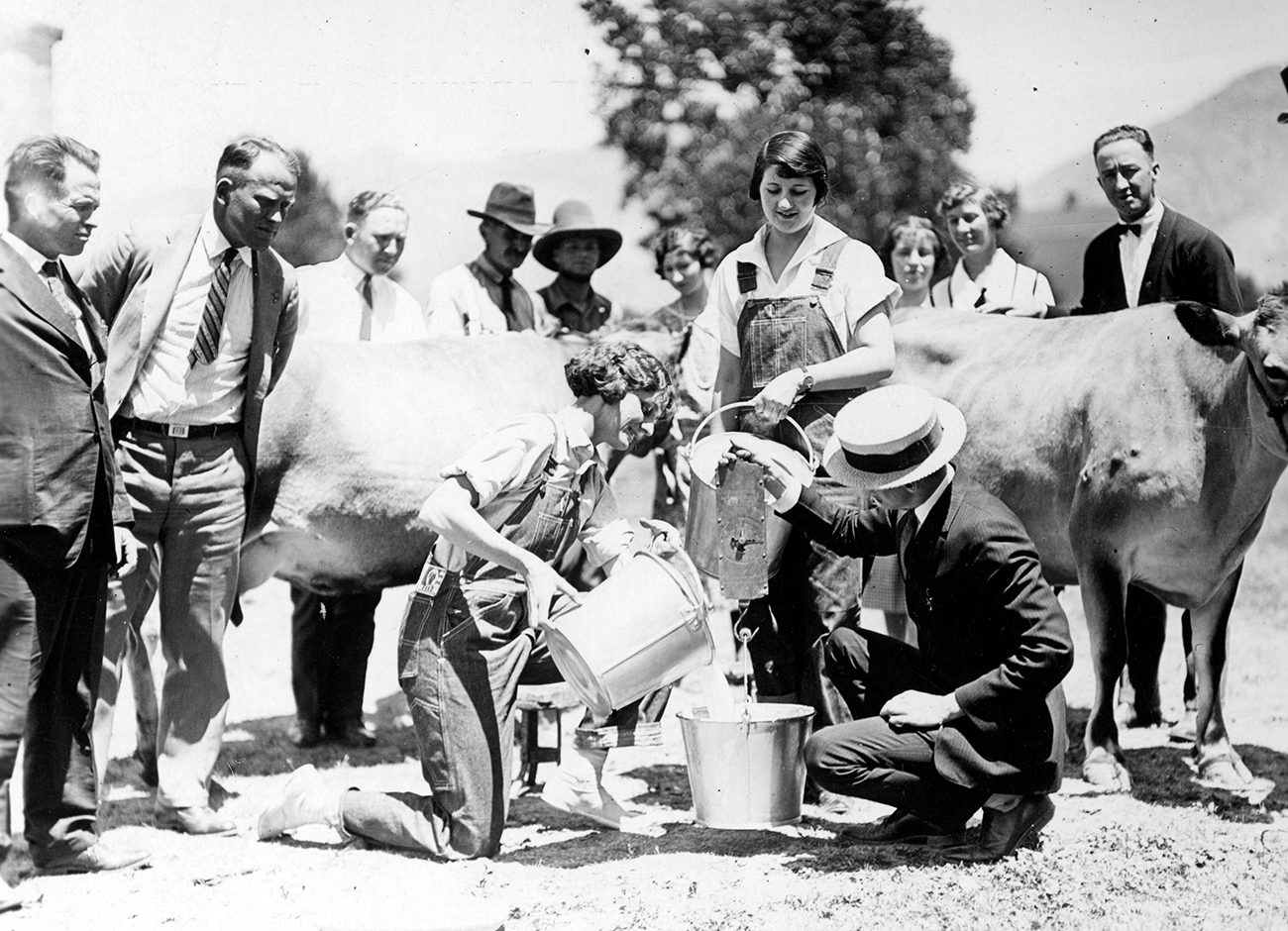 What was Aggie Ice Cream before it became famous? Meh, apparently. 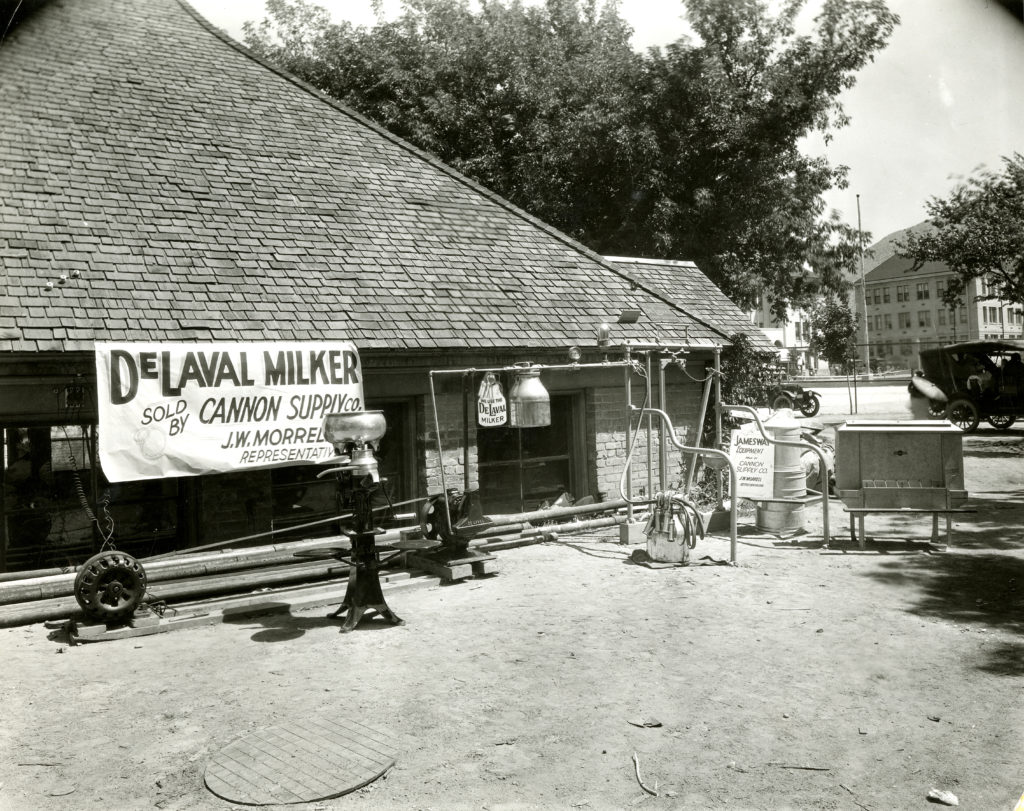 The Creamery annex in 1924, approximately where the Block A stands today northeast of Old Main

Understandably, with the country in the throes of the Great Depression, basic food staples had taken on elevated meaning and appreciation, including pie, evidently. However, let them eat ice cream was the rallying cry of students who came before them. They were the scholars of the 1920s, and they were roaring for the stuff. 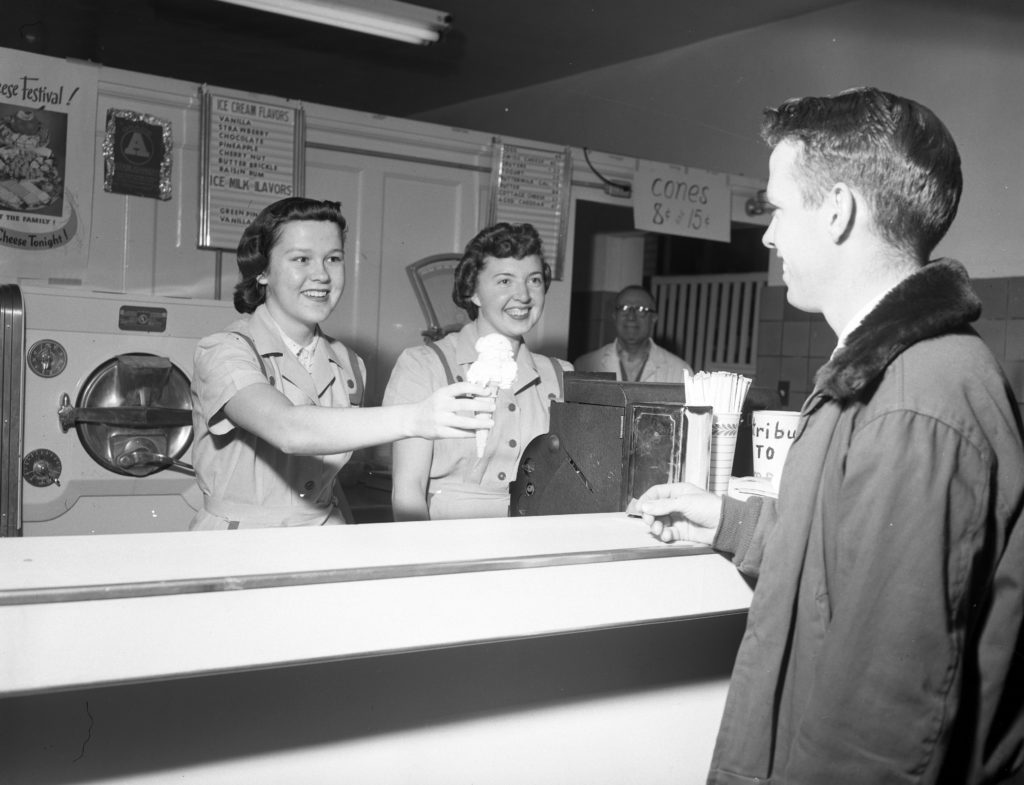 When Aggie Ice Cream was eight cents and the creamery in 1953 was on the main floor of today’s Animal Science building.

Patience had been required up to that point to allow the use of the Animal Science Building, which still stands on the Quad but referred to as the Livestock Building in its early days, to serve as a convalescent hospital during the 1919 Influenza Pandemic. It remained that way until the full return of the Animal Industry Department in 1920. The restoration involved equipping the building for dairy manufacturing, including refrigeration and freezers―a key first step in the commercial processing of milk into butter, cheese, ice cream, and other dairy products, said Donald McMahon, dairy foods professor in the USU Nutrition, Dietetics and Food Sciences Department.

And none too soon, either, for the students.

The Jan. 9, 1920 edition of Student Life reported that “… we are assured cheese, butter, and ice cream will soon be manufactured in such large quantities that servings of each will be granted free at the cafeteria to those who have so far stood the menu without refusing to pay or raising a riot.”

The stage was set for the future father of Aggie Ice Cream to make his first appearance. That was in 1921 when Gustav H. Wilster was recruited from Iowa State University, then known as the Agricultural College and Model Farm. Prior to that, he headed up dairy husbandry at Queensland Agricultural College, which is today the University of Queensland, Australia. 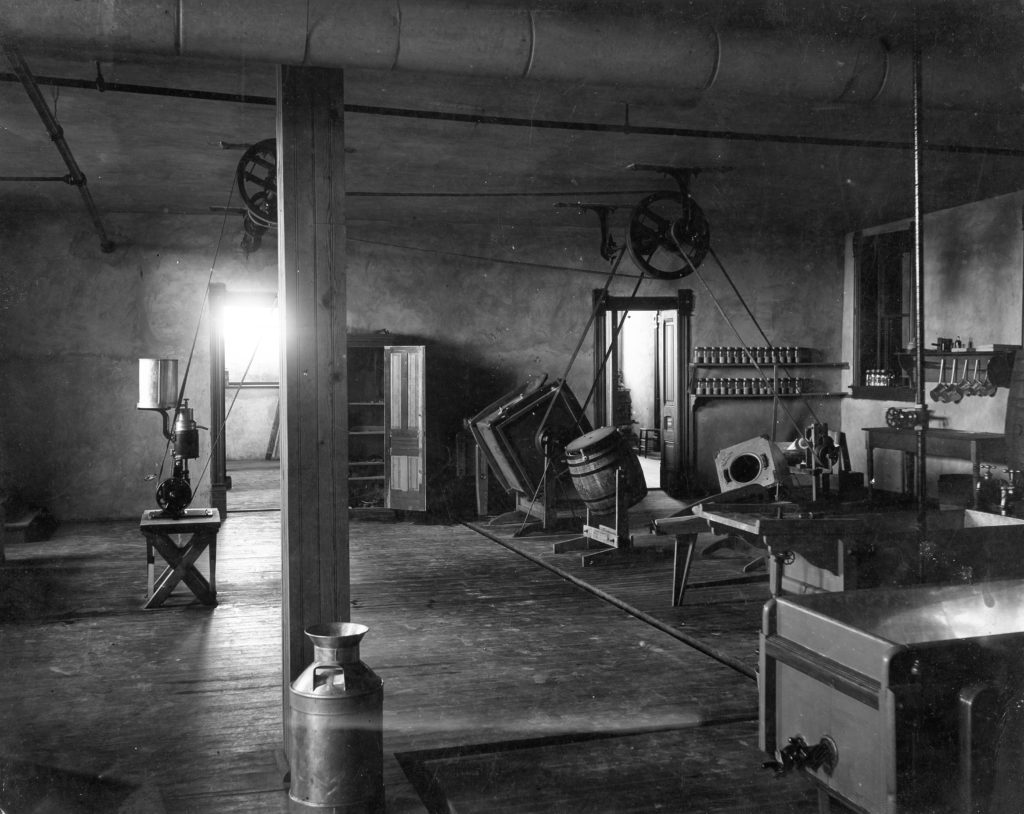 The original 1890s Aggie Creamery in the basement of Old Main.

Although the university had been processing milk into butter and cheese from its beginnings in the basement of Old Main, it was not until 1907 that dairy manufacturing first entered the college’s curriculum. Even then, it was not until Wilster’s arrival that the college began in earnest to ramp up student curriculum in dairy science and production, McMahon said.

At that time the school owned 40 head of milk cows, both Holsteins and Jerseys, which were pastured just south of the Logan cemetery as well as in a holding field by the milk barn that today is the parking lot directly north of the University Inn. There was plenty of milk for making butter, cheese, and ice cream, and Wilster wasted no time.

On Jan. 9, 1922, within months of his arrival, he began teaching a short course in ice cream making and testing. He was experimenting with a lacto ice cream, which was new to Utah. He brought the recipe with him from Iowa. It was made from pasteurized milk, ripened with pure culture, and then added with sugar and flavoring―a forerunner, McMahon observed, of today’s frozen yogurt. He also dabbled with a cherry lacto, wrote V.T. Mendenhall in Aggie Ice Cream: Our Smoothest Tradition in 100 Years. 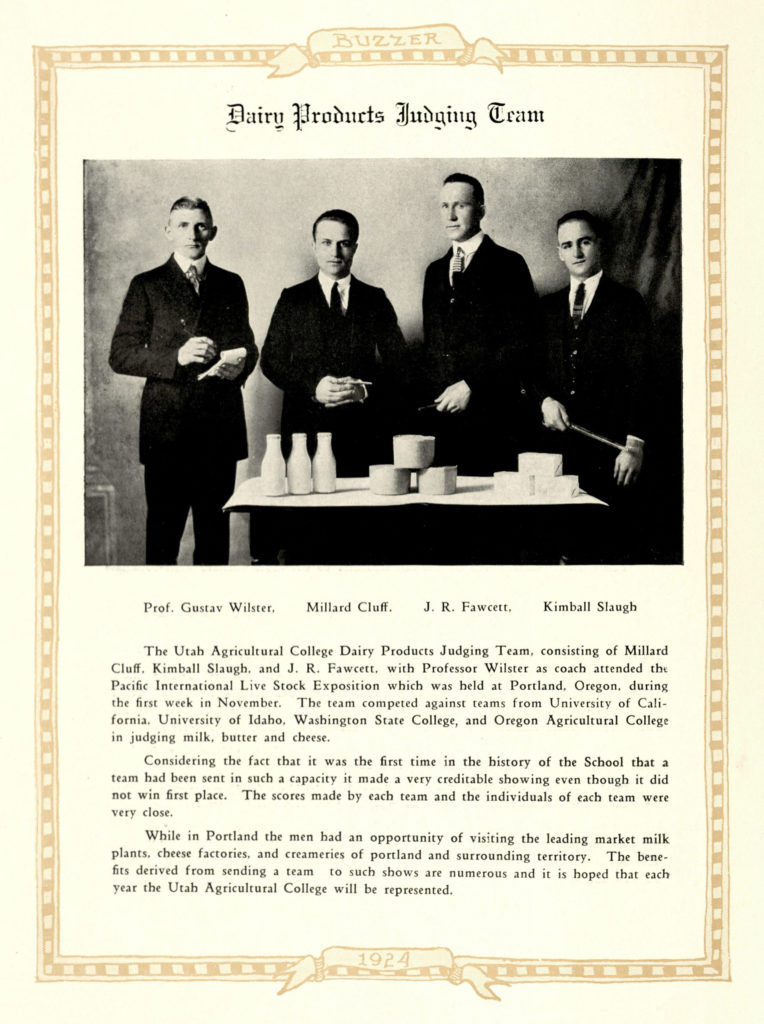 The father of Aggie Ice Cream, Gustav H. Wilster (left) at a judging competition in Oregon with his students

Browse through the school’s old Buzzer yearbooks, and you are hard-pressed to find any photos of Wilster. Fortunately, at least one does exist in the 1924 edition. You find him standing straight and earnest with pencil and notebook in hand. Equally stoic are his three students who look to be professors themselves, Millard Cluff, J.R. Fawcett, and Kimball Slaugh. On the table before them are three pints of milk, three blocks of cheese, and three cubes of butter. It is November 1923, and they are in Portland, Oregon competing at the Pacific International Live Stock Exposition. It is the first time in school history that a team representing the UAC was competing against the likes of University of California, University of Idaho, Washington State College, and Oregon Agricultural College.

The college was breaking new ground, and although they did not take first place at the exposition, they made their presence known. “The benefits derived from sending a team to such shows are numerous and it is hoped that each year the Utah Agricultural College will be represented,” the Buzzer reported.

This was not a club event, but an academic one, and Wilster and his smartly dressed students appear to recognize the gravity of the moment, as if to say, “we’ve done our part, now the fate of Aggie artisan cheese and blue mint ice cream firmly rests with you. Seize the whey!”

Except for the pun, Dave Irish, today’s creamery manager, does take that unspoken sentiment to heart. He said he is well aware of his responsibility to ensure that Aggie Ice Cream always remains in the top tier of ice creams around the state and is somewhat unnerved by the charge.

“It concerns me all the time,” he said. “I know we are a hallmark of the university.”

Today Wilster would probably be pleased, and amazed, how consumption of Aggie Ice Cream has increased from hundreds of gallons per year to today’s annual production of 52,000 gallons of ice cream and 5,000 pounds of cheese.

Wilster knew he had a good thing going and was confident enough to share a sample of his cherry lacto with Utah Gov. Charles R. Mabey when he paid a visit to the college in February of 1922. He also made sure there was plenty on hand for the 2,500 in the Logan community who camped out on the Quad that summer for the farmers and homemakers encampment. It was the beginnings of Aggie Ice Cream where cones “of all colors and flavors” were offered, according to the October 1922 edition of Student Life. “…such as Yum, Pineapple, Raspberry, Chocolate and Vanilla.”

Yum, indeed. And to the students of 1932 with that penchant for pie, you want to know what goes good with that?