Home / Environment  / Working With The Land

Working With The Land 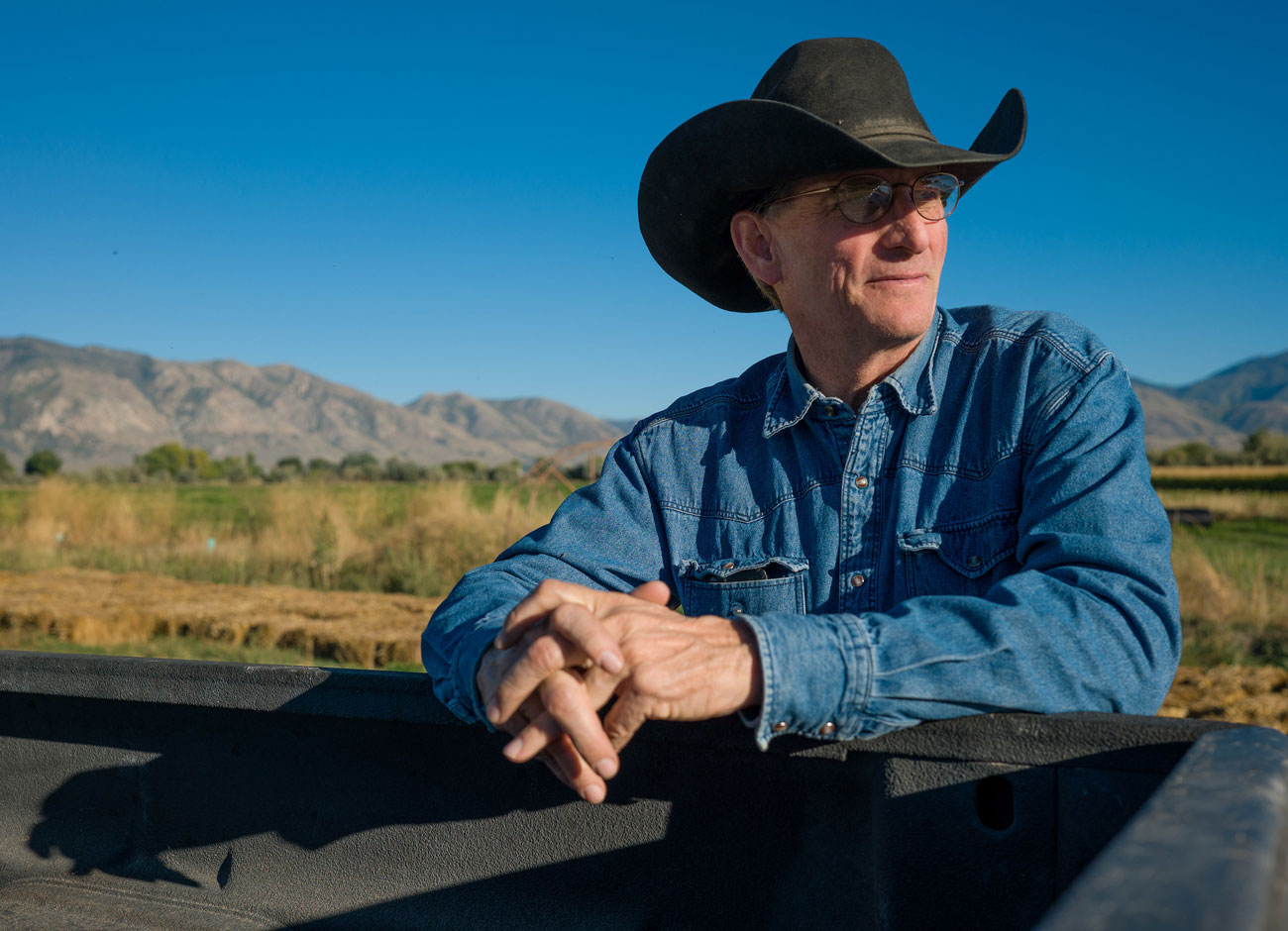 Just outside of Corinne, Utah, there’s a family-owned ranch and farm that has operated for more than 120 years since its founding in 1900 — JY Ferry & Son, Inc.

The farming arm cultivates 3,000 acres of corn, wheat, alfalfa, and grass, while on the ranching side, they tend to a 1,200-head herd of cattle. They also run a feedlot that can hold up to 6,500 head of cattle at one time.

“The greatest resource that any farming, ranching operation has is the land,” says Ferry, who also now serves on the USU Board of Trustees. “And you need to be able to look at the land and understand the strengths and weaknesses, and the challenges, the opportunities, of owning that land.”

To the south, sits the Bear River Migratory Bird Refuge, a federally-protected 80,000 acres of marsh and wetlands that provides essential habitat for migratory birds during their journey. To the north: Little Mountain and a mixture of dry desert and alkali flat landscapes that experiences less than 13 inches of rain a year on average.

In the center, the Ferrys straddle the Bear River Delta as it flows south through the Bear River Migratory Bird Refugee into the northern reaches of the Great Salt Lake.

It’s a landscape that creates unique challenges, as well as opportunities, in the interaction of agriculture, wetlands, and wildlife habitats.

“As my grandfather said, ‘You will always cooperate with Mother Nature,’” Ferry says. “‘If you don’t,’ you know, ‘you’ll be out.’”

Through agreements and partnerships, both with private landowners, as well as public agencies, the Ferrys graze their cattle on 110,000 acres of the surrounding area, including the wetland habitats. Historically, grazing in this ecosystem has been seen as detrimental; but through years of work, they have unveiled some benefits of this practice.

Phragmites, Phragmites australis, is a towering reed that can be found along the banks of many Utah waterways, and is declared as a noxious and invasive weed in the state. According to the U.S. Fish and Wildlife Service, Phragmites is the No. 1 priority for invasive plant treatment and control on the Bear River Migratory Bird Refuge. It’s aggressive in nature, spreading rapidly in wetland ecosystems, like the Bear River Delta, creating a dense canopy that crowds out native plant biodiversity, and in return provides little in the way of value to the surrounding habitat.

Phragmites is quite palatable to cattle, however.

The Ferrys have helped demonstrate that by using cattle to graze on the plant, it can help sustainably manage the populations of Phragmites better than state and federal practices have been able to so far. According to the Ferrys, more than 25% of state and federally managed wetlands in the area are inundated by the plant, while the Ferry’s managed lands comprise of less than 1% Phragmites dominated areas. Taming this problem enables desired plant populations to become established again.

“We have found that with spraying, when you spray with a glyphosate, you’ll kill everything, the good and the bad,” Ferry explains. “Because of the aggressive nature of Phragmites, guess what comes back first? Phragmites does. With the grazing, we have discovered that Phragmites is a nutritious and a palatable plant, the cattle will go after that; and so you’re putting pressure on those plants you want to do away with, and creating space or room for those aquatic plants … that the wildlife want.”

But it isn’t just the ranching operation that takes a sustainability approach. They’ve also focused on improving their farming practices.

They took to laser-leveling 1,600 acres of field, a precision approach that can help improve water flow across the crop, boosting crop production and reducing waterlogging and runoff. They’ve also installed 73,000 feet of pipe in place of existing earthen ditches to increase water efficiencies. Growing cover crops and implementing minimal tillage practices, along with GPS tilling and planting, have also found their way into the Ferry operation.

The Ferrys have entered into partnerships in the pursuit of conservation and sustainability, as well. They contracted with the Bear River Migratory Bird Refuge to graze Phragmites, helped create the Bear River Watershed Conservation Area, donated a 30-acre easement for its creation, and placed 750 acres under an easement with the U.S. Fish and Wildlife Service. In 2012, in partnership with Ducks Unlimited, they helped restore several hundred acres of wetlands, through building new levees, canals, and islands.

All of this work — cattle grazing practices, water efficiency improvements, and strategic partnerships — has helped increase bird habitats and health in the surrounding environment, according to a local duck club and the U.S. Fish and Wildlife Service for the Bear River Bay.

“That’s the part that is exciting,” Ferry says. “When you look at a combination of the resource that is there, the proper management, the business model on that resource, and you see the harvest that is coming. Whether it be a calf crop, or a corn crop, or a grass crop, or a flock of ducks or geese. The land is telling you, this what I can do for you.”

Outside of the farming, and the ranching, and the conservation work, Ferry spends part of his time as an adjunct professor at Utah State University, as well as his duties on the USU Board of Trustees. He implements case studies in the classroom, and asks students to put themselves in the positions outlined therein, and develop and defend proposals based on those circumstances.

“Utah State, this institution, is an incubator of the future,” Ferry says. “So, I am investing in the future when I spend time with students. They’re the ones that are going to take my place to grow and manage the land.”

Words and video by Taylor Emerson