Home / Environment  / Managing for the Public and the Land

Managing for the Public and the Land 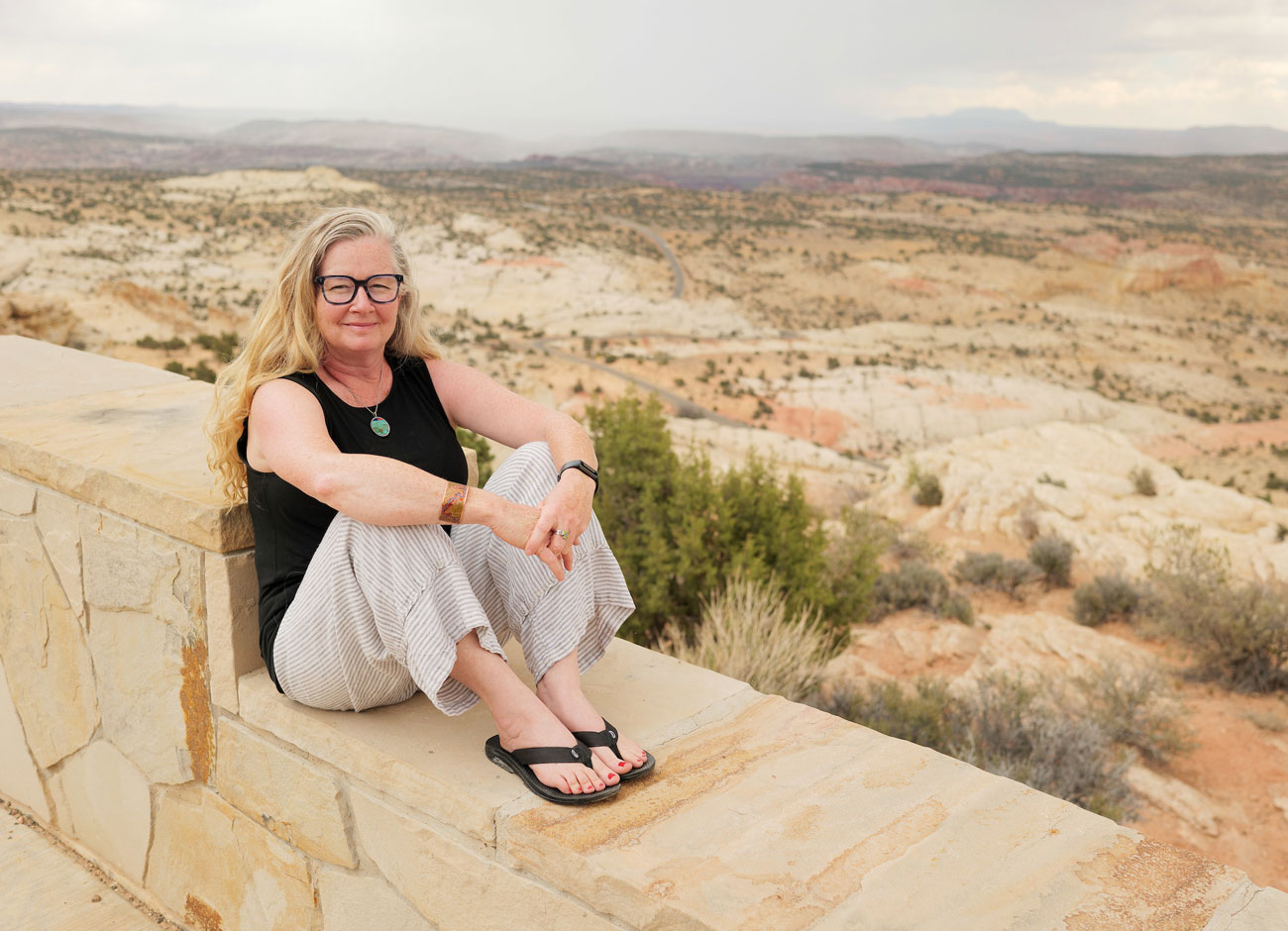 Grand Staircase Escalante National Monument seems to be a place for which the word “vast” was created.

The monument’s 1.87 million acres are bounded on all sides by national parks, monuments, and forests, that combined cover most of southeastern Utah. It is a place where 4 billion years of geology are on display with water- and wind-cut formations. It is big country made of all the colors in southern Utah’s palette.

Grand Staircase can also be a place where your focus is captured by patterns on the skin of a 3-inch-long spiny lizard and held there watching its tiny eyes dart while the rest of the world melts from your consciousness.

It is the place where Allysia Angus, M.L.A. ‘99, a Tennessee native, feels at home and it has been her stewardship for more than two decades. Angus is one of the four Bureau of Land Management (BLM) employees in landscape architecture positions, one of just two in Utah, though she notes that others with degrees in landscape architecture work for the agency in different roles.

“Something that resonates for me is that the landscape on the broad scale is incredibly impressive, but it becomes even more so when you take the time to pay attention to the micro scale of things at your feet and at your fingertips,” Angus says. “Those things can also inspire awe. I have friends who have done the drive-thru sort of visit and appreciated the sweeping views and scenery, but then we go for a walk, and they notice the patterns and the textures and the beauty embedded at close range, and it starts connecting with them in a totally different way.”

The BLM manages nearly 22.8 million acres of public land in Utah, about 42% of the state. Grand Staircase Escalante is the first national monument managed by the BLM rather than by other agencies. The BLM’s mission is to “sustain the health, diversity, and productivity of public lands for the use and enjoyment of present and future generations.”

That mission means different things to different people. It can be tempting to think of managing resources for one big “general public” but there is no such thing and the BLM manages for multiple uses. Part of Angus’s job as a public servant stewarding public lands means understanding and balancing the needs and expectations of people who view and experience Grand Staircase in their own ways.

Visitor numbers increased rapidly in the past few years and then the COVID-19 pandemic made the world’s great outdoor spaces even more attractive destinations. Angus says employees try to keep up with the people discovering Grand Staircase, but they do it with fewer amenities and less staff than the national parks and 12 times the acreage of nearby Zion. Even as the pandemic wanes, it seems unlikely that visitor numbers will decline.

“One of the management precepts of Grand Staircase is about the sense of discovery and preserving its frontier character,” Angus says. “I’m enamored with small-scale details and finding something new, like a cool or strange rock, a new plant, or a canyon. I don’t feel like I’ve even begun to scratch the surface and I’ve been there over 20 years.”

Angus says that while wandering has been her preferred pastime since childhood, that it’s not what everyone wants to do. Some visitors want to camp, or hike. Others arrive ready to reach a specific destination and check it off their list. Some prefer driving through and stopping at a few overlooks with panoramic views. A big part of her job is re-envisioning sites that may not be designed in ways that best serve visitors and the environment, including places where trailheads and camping spots resulted from human use rather than good planning. She is proud of several projects where campsites, parking areas, restrooms, and trails have been redesigned, adjacent land restored, and people are enjoying the benefits.

Some of what Angus appreciates about Grand Staircase isn’t about the geology or botany, it’s the quality of the light and also the darkness. She has been involved in dark sky research and values the remarkable stargazing that happens in one of the largest natural dark places left in the lower 48 states. The expansiveness of the monument also means people can get away from the noise they may not realize they’ve grown accustomed to until they experience the quiet there. She tells how researchers came to measure sound levels in various parts of the monument but had to return with more-sensitive instruments to measure the quiet.

“Most people don’t live in environments where they get to experience these qualities anymore,” Angus says. “If people take the time to immerse themselves in the place, and you may not get there quickly, but if you’re able to slow down and fully be there, the place can work some of its magic on you.”