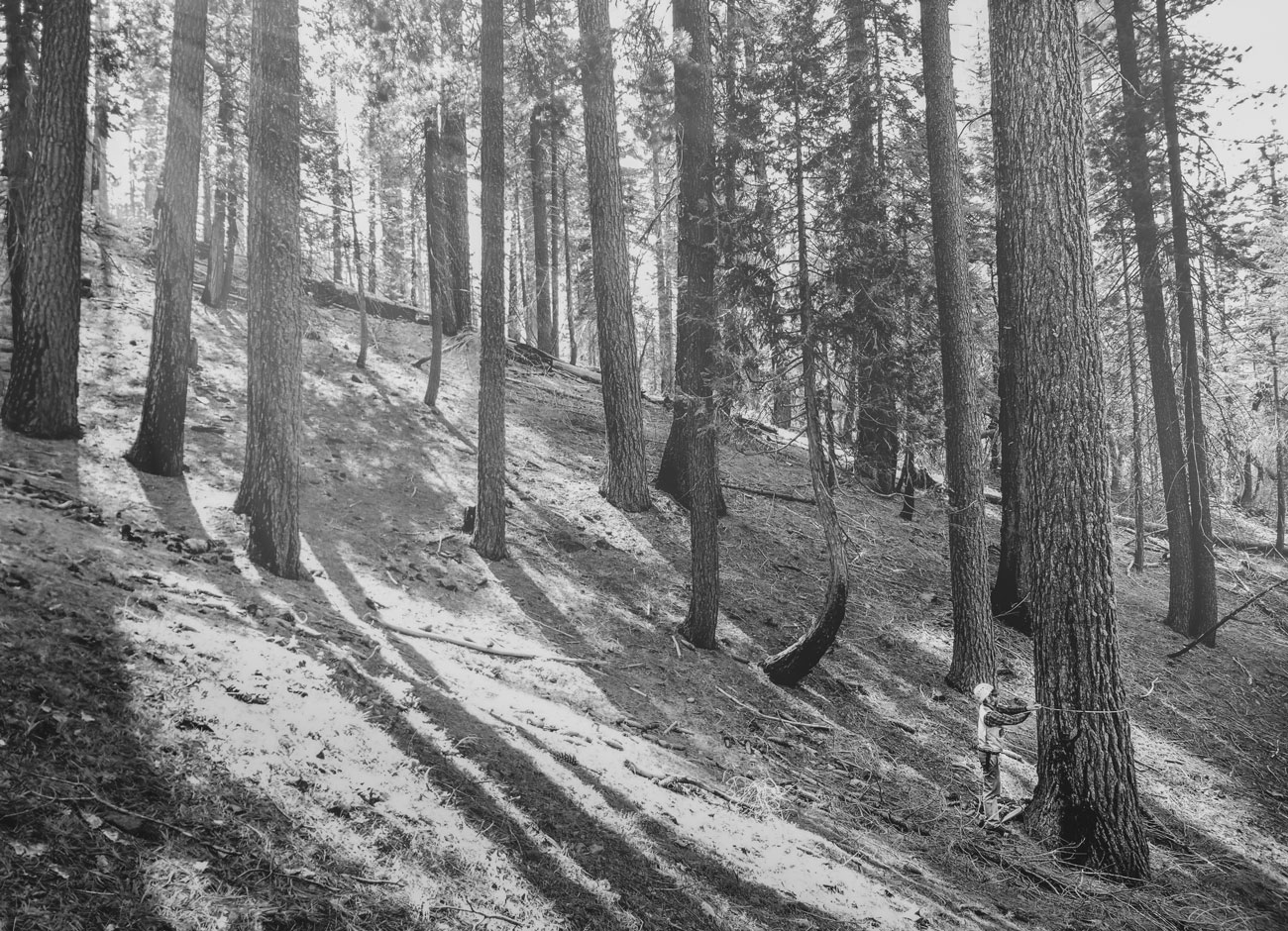 For most of summer 2020, Bella Wetzler ’23 and others from the Lutz research team worked and camped in relative isolation among the towering old-growth forests of Yosemite National Park.

It was June, in the midst of the pandemic, and the team of eight students and seasonal employees had agreed to limit contact with the outside world so they could move forward with measuring and monitoring every woody stem on the 60-acre research plot.

The group just returned to camp one evening for dinner when a fast-moving windstorm began churning branches of sugar pine and white fir high overhead. A wildfire had burned the area seven years earlier, and Wetzler was well aware of the danger strong winds could pose, toppling snags that weighed upward of 10 tons. What she didn’t expect were the pine cones.

“Sugar pine cones are huge,” she says. “They can get up to 22 inches long. The wind started knocking them out of the trees, and it sounded like bombs were dropping all around us.”

Everyone scrambled for their hard hats, she says, and no one was hurt.

The group was working three forest plots that Jim Lutz, associate professor of wildland resources at Utah State University, meticulously assesses every summer, as he has for the past 13 years. Lutz studies Big Trees — not necessarily the heavyweight species like coast redwood or giant sequoia — but the biggest trees in any given forest, the top 1% of matriarchs by weight, those with trunks reaching more than 4 feet in diameter in old-growth forests of the West.

There aren’t actually many of the old-growth forests left, which makes big trees a challenge to study. Most in the United States were harvested long ago, the bulk of the time-strengthened wood in the widest-diameter trunks converted to ship masts, struts for bridges, beams for buildings, and cash. In remaining forests across the world, big trees make up a fairly small proportion of roots-in-the-soil on any given acre; but that small group carries a lot of weight, both ecologically and literally.

Big trees define the forest, says Lutz. They are, it turns out, something of a foundation to forest ecology: they create microenvironments of moderate temperature and humidity under their canopies; provide habitat for birds, animals, and insects; change conditions for understory plants; and determine in large part which plant species flourish and which ones don’t. And when big trees are damaged after severe wildfire, or perish from an attack by insects or disease, they often die in spectacular fashion, thundering to the forest floor in a mass of trunk and tangled branches, pulling down their neighbors and opening canopy space to the sky in a way that rapidly changes the forest. In addition to creating important habitat for things like moss and mammals, the demise of a big tree stimulates new forest structure and variety for what would otherwise be closed and monotonous growth.

Lutz actually started his career as an engineer, and then wandered into investment banking. You’d expect there to be an existential crisis at some point in this narrative that propelled him to leave the bustle of his London office and head to the mountains to commune in the forest. But it was less a philosophical crisis, he says, and more practical strategy. He appreciates his meandering career path; his diverse background informs the way he approaches science.

Take these forest plots, for instance. In a methodology reminiscent of engineering fastidiousness, Lutz monitors the health and survival of trees by examining 170 acres of old-growth forests at three sites in the western United States where the team surveys, identifies, and measures every single stem greater than one centimeter in diameter. Every year Lutz and his students monitor each of these 100,000 trees for health. If a particular tree is struggling, it’s noted. If it dies, technicians like Wetzler do a post-mortem evaluation armed with a hatchet and a knife to determine the cause of the death.

Many factors affect the health of big trees, but Lutz has found, among other things, that connections to a strong mycorrhizal network — the underground exchange of nutrients between fungus and plants — particularly benefits large trees. Trees offer sweet products of photosynthesis to the fungi connected to their roots, while fungi enhance a tree’s nutrient uptake from the soil, shift nutrients between trees, regulate genetics to produce better-armed trees, and even allow inter-tree communication.

Big trees are, by definition, genetically successful, says Lutz. Survival over the centuries proves that these trees are the right species with the right genes in the right spot at the right time. These are proven genes, the kind that should be passed on to future generations — and big trees are designed to do just that. While a young 6-foot tall tree might produce a cone or two in any given year (or commonly none at all, since young trees focus most of their energy on growth rather than reproduction), a 200-foot tree is more-or-less laser-fixated on genetic reproduction, producing thousands upon thousands of cones, acorns, seeds, or nuts every year, each a neat little package of genetic information with higher-than-average likelihood for survival and success. If a big tree disappears, that prolific source of genetic reproduction goes with it; a small tree simply cannot replace the ecological role of a big one in the forest, Lutz explains.

And neither can small trees help all that much with climate change. Trees by weight are about half water. Of the remaining dry weight, about half is made up of carbon pulled from the atmosphere into long-term storage where it can’t cause trouble. Young trees have slender trunks, and much of the carbon they hold is in their annually-shed or easily-burned leaves and slim branches. Small trees add little to net carbon storage. The largest 1% of trees around the world are holding half of all forest carbon.

All those seedlings planted on Arbor Day? They don’t do good in the carbon equation, says Lutz, and in parts of the West they may actually be increasing fire danger, creating a ladder of easily consumable fuel to pull wildfire from one tree to the next.

Big trees, on the other hand, have a good, solid heft to their trunks and thick bark. Their trunks don’t easily burn. When a tree puts on just a little extra height, the amount of carbon it stores increases exponentially, depending on the species. A sugar pine with a 2-foot diameter (considered a medium-sized tree) has a dry weight (if the wood is completely dried) of about 2 tons. Double the diameter to 4 feet, and the dry weight of the tree jumps to 10 tons. Nudge up the diameter to 5 feet, and the sugar pine’s dry weight would be a whopping 20 tons.

The biggest 1% of trees, in fact, contain half of the earth’s forest biomass, Lutz says. The western United States has some of the heaviest forests in the world. Incredibly, with all our fascination with these majestic trees in culture, commerce, and religion, their role in forest ecology is not well studied or well understood. In some places in the East, big trees were removed from the landscape so long ago that it’s hard to even know how those original forests might have functioned, Lutz says.

“A lot of major assumptions have been made about how these old forests work. Our big plots let us examine what we’ve assumed about these forests, and we’ve already come up with contradictions to accepted theory,” he says. “If our society decides we want to have more primary forests, this work will help to restore them. We’ll be better able to understand the structure and processes that affect them.”

There’s really only one thing that can restore big trees to forests — and that is time. Big trees take hundreds of years to mature. There’s no way to skip that process, says Lutz. Young trees replanted in cleared forests won’t add significant heft to their trunks for another 50 years. A limber pine planted today in Logan Canyon might finally tower over the Cache National Forest in the year 2321 if it remains healthy and protected from human activity. But trees planted 50, 100, and 200 years ago, the really big ones you find on the landscape now, are supporting forest ecosystems today. It’s clear to Lutz where our priorities should be.

“Engineers and investment bankers tend to be optimists and problem solvers,” he says, traits he transferred from his previous careers.

Lutz considers himself an informed realist — in a world where every ecological system has been touched by humans, he doesn’t expect perfection, that fairytale forest of pre-European settlement that some people want to see restored. But he would like to see society put more emphasis on natural systems to achieve the “best possible and practical future.” When it comes to protecting our forests, it’s all about protecting and promoting the big trees, he says.