Home / Culture  / The Call of the Stage

The Call of the Stage 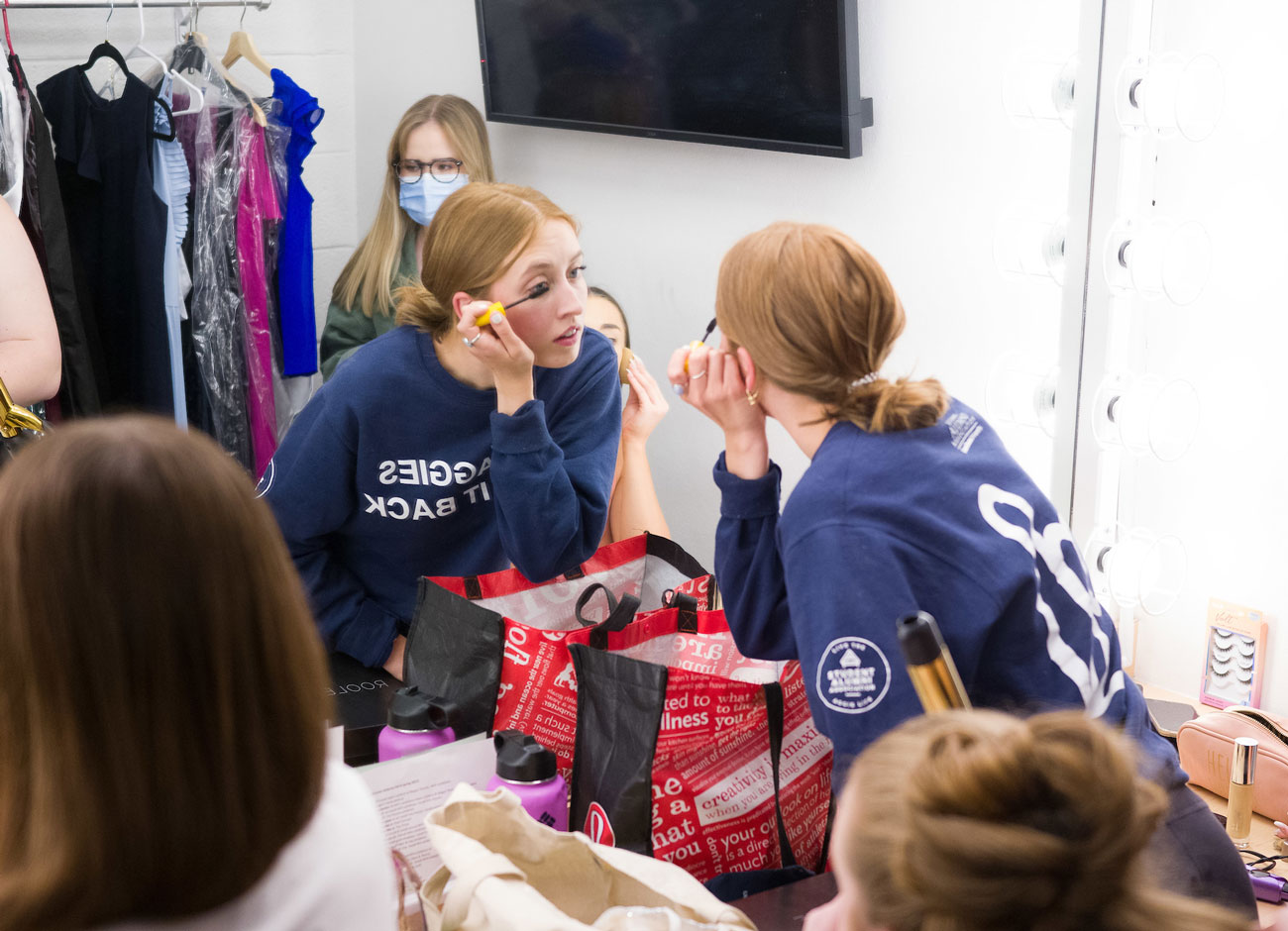 The message may be obscured by sequins and revelry, but who they honor reflect the values of a society. Pageants at Utah State University hold similar functions and elevate voices that don’t always take center stage.

Prior to 1950, a competition associated with selecting USU Homecoming royalty called the Harvest Queen Pageant reigned supreme. Eventually, “questions about the appropriateness of the event referred to practices like … women being measured by male judges,” according to an exhibit by USU Special Collections & Archives. The contest was replaced with the Miss USU pageant, which took a brief hiatus around 1998 and was rebooted in the early aughts along with the formation of a Mr. USU competition.

Exact dates are unclear, but other pageants including a Mr. and Miss International and a Miss American Indian USU (now Miss Native American USU) also appeared around this time, creating space for Aggies with other points of view.

Decades later, the annual Miss USU competition continues to evolve. While the 2020 spring event was canceled due to the pandemic, a modified version was held Sept. 20 where participants wore masks, the opening number was scrapped entirely, and the talent portion was pre-recorded. For Vanessa Moser, a junior journalism major and candidate in the canceled Miss USU competition, the event is about spotlighting people who want to make positive change.

“A huge reason why I wanted to run was I wanted to make a change here on campus about sexual assault prevention,” she says. Moser became Miss USU pageant director because she wanted contestants to have the same opportunity to put their own passions on display. She created a support system so that Miss USU has greater latitude to make a difference. We are all about women’s empowerment and lifting each other up, she says. “It is such a fun event and so exciting to wear a pretty dress, but it’s so much more than that. It’s about letting your voice be heard.”

Rachel Taylor made sure to use hers. The communications studies major competed as Miss Involvement and used the moment to introduce her true self to her peers.

“I use she/her pronouns and I identify as a bisexual woman,” Taylor announced, adjusting her cloth face mask. “This year’s theme for Miss USU is Her Story. My story originated in confusion and frustration with my true self as well as my sexuality. It was through the wonderful people, staff, and involvement opportunities at Utah State that I was able to become confident in myself. … My platform is rooted in the inclusion and celebration of all students, but particularly those who face hardships for who they are and who they love.”

Her pitch involved bringing LGBTQIA+ pride to USU and welcoming allies to the cause. She won first attendant. Moser, who had known of Taylor’s status beforehand, felt grateful her friend could find acceptance with herself and her peers on stage.

“I think it has a lot to do with what has been happening here,” she says, and creating an environment that allows people “to become who they are and experience who they are.”

The 2021 Miss USU competition in April remained a forum for disclosure and empowerment. One Mexican American contestant addressed the national rise in hostility towards individuals with different backgrounds. Another contestant shared her attempt to die by suicide and a platform to reduce the stigma of talking about mental health. Other candidates called for random acts of kindness. Miss Involvement Clara Alder campaigned on the idea of launching The Aggies Stories Project, a statewide effort to celebrate human connection through storytelling.

One November evening in 2018, the Taggart Student Ballroom was at capacity. Overflow areas were packed with more attendees waiting for USU’s first drag show to begin.

But they have witnessed incremental changes that have made it possible. The resident assistant has come a long way to be out and advocating for LGBTQIA+ issues. “It’s really difficult to be queer in Utah,” they say, adding that there is a lot of queer phobia among residents who may have strong views of gender roles. “In my opinion, it’s going to take a lot more than one event on campus,” to change minds.

But it’s a start.

Drag is known for its kitschy costuming and over-the-top hair and makeup. Historically associated with the LGBTQIA+ community, drag is both entertainment and an outlet. It serves as a way for performers to confront mainstream gender and beauty standards in a self affirming way. The USU Drag Show was organized by campus resident assistants and served as an educational affair with flair as drag kings and queens performed and participated in a question-and answer session.

“Drag is a performance of gender. Being transgender is a gender identity, it is who you are,” a performer named Marlone told the audience. “If you want to know how we identify, or what pronouns we use, just ask us. We are more than happy to help you understand.”

The show was so popular another followed in 2019. The COVID-19 pandemic disrupted programming in 2020, but there are plans to hold future drag shows post-pandemic, says Skousen, who helped with the 2019 event. The goal is that by introducing drag culture to the USU community, the unfamiliar can become familiar—and perhaps, less scary. It was also important to create “brave” spaces for people to just be themselves.

“Being loud is important if you can in claiming space so people who can’t be loud can feel comfortable,” Skousen explains. “Having to act like someone you’re not, it’s really mentally stressful.”

A Celebration of Culture

Alina Begay directs the annual Miss Native American USU competition and typically beads an intricate crown for the winner each year. The activity takes months of her time, not only because she painstakingly fastens each bead by hand, but because of the state of mind the maker must be in to create it: Hózhó is a sacred Navajo philosophy to guide people into a state of harmony and balance with the world.

Begay is beading her final crown this year. It will be passed down at subsequent Miss Native American USU competitions because the 2021 event was canceled due to the COVID-19 pandemic, which
disproportionately devastated Indigenous communities.

“Our language keepers are dying,” Begay says. “We are losing our elders who have all of our knowledge.”

The Miss Native American USU contest is about preserving cultural connections by highlighting participants’ knowledge of Indigenous culture—“and showing that they are embracing it and they value it,” Begay explains. “It’s a pathway for opening up that education, especially since our cultures and languages are under threat every day. …We are the first people of this land and it’s often forgotten.”

The winner receives a scholarship and represents USU as an ambassador at powwows statewide. They perform community service and are judged on poise, leadership, public speaking ability, and understanding of Indigenous culture. The event is viewed less as a competition and more of a bonding experience. The families of contestants are invited, and a date is selected that works best for those who may be driving long distances from reservations to attend, Begay says. USU Dining Services prepares traditional native foods, too, such as blue corn mush and Navajo tea.

Miss Native American USU, and contests like it, honor the women in Indigenous tribes for their connection to them, Begay says, adding that they use a platform that “flips the script on how education was historically used to erase our cultures.”

View a gallery of images from the 2021 Miss USU contest.