Malouf is practically synonymous with luxury.

However, there was a time—not all that long ago—when those wonderfully comfortable bed sheets were housed in a small warehouse space on the west side of Logan.

And luxurious it was not.

Sam and Kacie Malouf opted to keep the industrial heater off, even in the winter. That meant that while fulfilling increasingly large orders for bedding, Sam could often be found typing away on his laptop sporting fingerless gloves.

“But we were always profitable, and I think part of the reason is because there were very controllable internal factors,” Sam explains. “And I knew it would cost an extra 500 bucks a month to turn the heat on.”

“And that was groceries for the family, so we weren’t going to do that,” Kacie adds.

“This company started in a very scrappy way.” – Sam Malouf

But heat wasn’t the only “luxury” missing in the early days of the multi-million-dollar company that now employs hundreds of people across the country. A decade-and-a-half ago, the president, CEO and co-founder of Malouf had to make do without restroom facilities on the premises, which, therefore, required Sam to make a half-mile trip to LW’s Truck Stop several times a day.

“This company started in a very scrappy way,” Sam declares.

“It was like, we needed to just find a way to make a thousand bucks a month,” says Kacie, the other co-founder in the Malouf success story. “There definitely wasn’t a vision from the beginning that we were going to build a bedding empire.”

Clearly feeling that “bedding empire” might have been too bold of a statement, Kacie quickly adds, “Not that we’ve done that.”

After a brief pause, she smiles and continues, “Well, I guess we kind of have.” 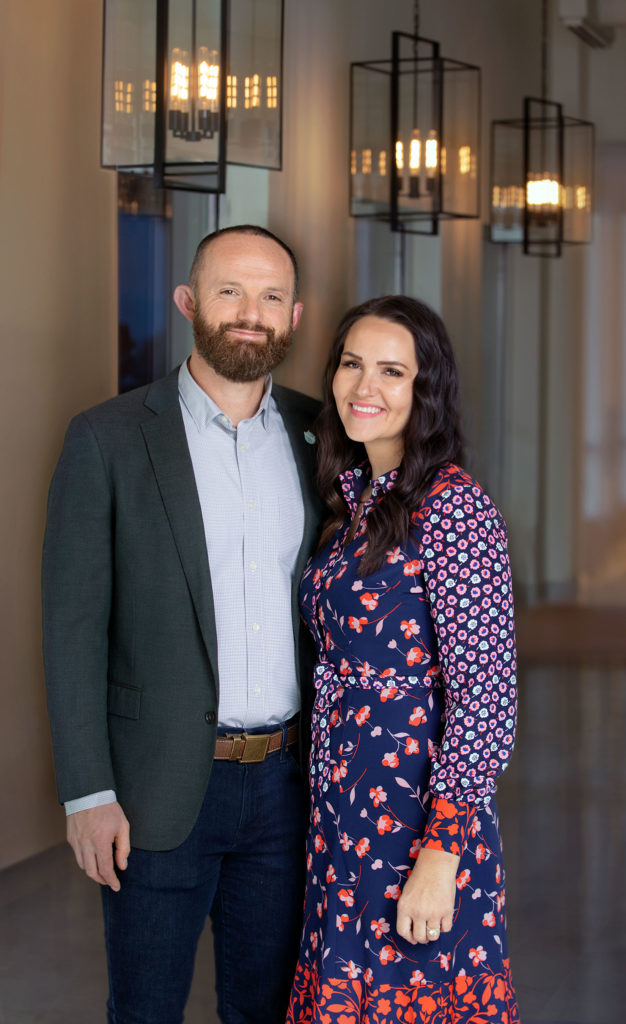 Since co-founding Malouf Fine Linens more than 16 years ago, USU
graduates Sam and Kacie Malouf have seen their company experience
immense growth. In turn, the couple is involved with numerous
philanthropic endeavors, including hosting the annual Art for CAPSA
event each autumn at Malouf headquarters in Cache Valley.

IT WASN’T all that long ago that terms like “thread count” and “Egyptian cotton” meant absolutely nothing to Sam Malouf.

Born in Logan, Sam spent his formative years in eastern Kansas and Vernal, Utah, before coming back to Cache Valley to attend Utah State University. And while working on dual bachelor degrees in accounting and marketing, he was perfectly content to sleep on an air mattress covered with sheets he purchased at a garage sale in Mexico.

But while at USU, Sam met Layton native Kacie Hess, the cousin of a roommate who was studying music therapy. The couple graduated and got married in 2003, which led to a trip to a higher-end retail outlet in search of bedding, and the genesis of a business idea that would abruptly change the direction of their lives.

“We were shopping at one of those places that’s kind of pricey, and I was like, ‘Holy crap!’ when I saw that bed sheets were like 200 bucks,” Kacie recalls. “It just seemed like they shouldn’t cost that much.”

Sam is quick to credit Kacie with the initial idea to look deeper into why there appeared to be such a high markup on sheets while he was on the lookout for “market gaps.”

The couple started to do some research on bed sheets while Sam was completing a master’s in accounting and Kacie labored at a local restaurant. Working out of their two-bedroom apartment, Sam and Kacie traced some sourcing back to Europe, then started purchasing overstock of high-quality sheets with credit cards and selling them online at a reasonable price.

Soon, the Maloufs were making that $1,000 a month they needed for rent and utilities, allowing Kacie to quit her job and focus on selling sheets. The couple briefly moved to Portland, Oregon, so Sam could pursue an opportunity selling real estate with some friends, but with bedding sales going so well they came to a “crossroads.”

They decided to go “all-in and move back to Logan, because we thought this would be a great place to build a business,” Sam recalls.

“There definitely wasn’t a vision from the beginning that we were going to build a bedding empire.” – Kacie Malouf

Malouf Fine Linens quickly outgrew that first warehouse, allowing them to move into a larger one (with a bathroom!), and soon after, hire their first full-time employee. The company branched out into selling pillows, mattress covers, and bed frames, which led to more employees and acquiring more buildings, until the company purchased a 28-acre parcel of land in Nibley and started construction on its corporate headquarters. That stunning, two-story facility officially opened its doors in the summer of 2016, complete with Italian marble floors, tropical trees, basketball court, weight room, and commercial-size kitchen and dining area.

But Malouf HQ is like an iceberg: there’s far more to Malouf than what people in Cache Valley may see. While a few products may come and go, much of the warehouse and showroom space in the building has been gobbled up to accommodate employee work stations, and Malouf now has far larger distribution centers in North Carolina, Ohio, and Texas, as well as in nearby Tremonton.

Malouf is nearing completion of an expansion to its headquarters, while also preparing to start construction on a building at its compound in Nibley. As of the fall of 2019, the company employed more than 460 people.

“The growth is very rapid,” says Brian Blotter, director of human resources and a 1998 graduate of USU. “I’ve been here three years, and we’ve added 120 people every year since I’ve been here.”

MALOUF currently finds itself in the enviable position of not only needing to hire more and more people due to its phenomenal success, but people also want to work at Malouf. A lot of people.

“We go to the two job fairs they have at Utah State every year, and this last time we had to bring an additional person to help because there’s usually a line of 10 or 12 people to meet with all three of us,” Blotter says. 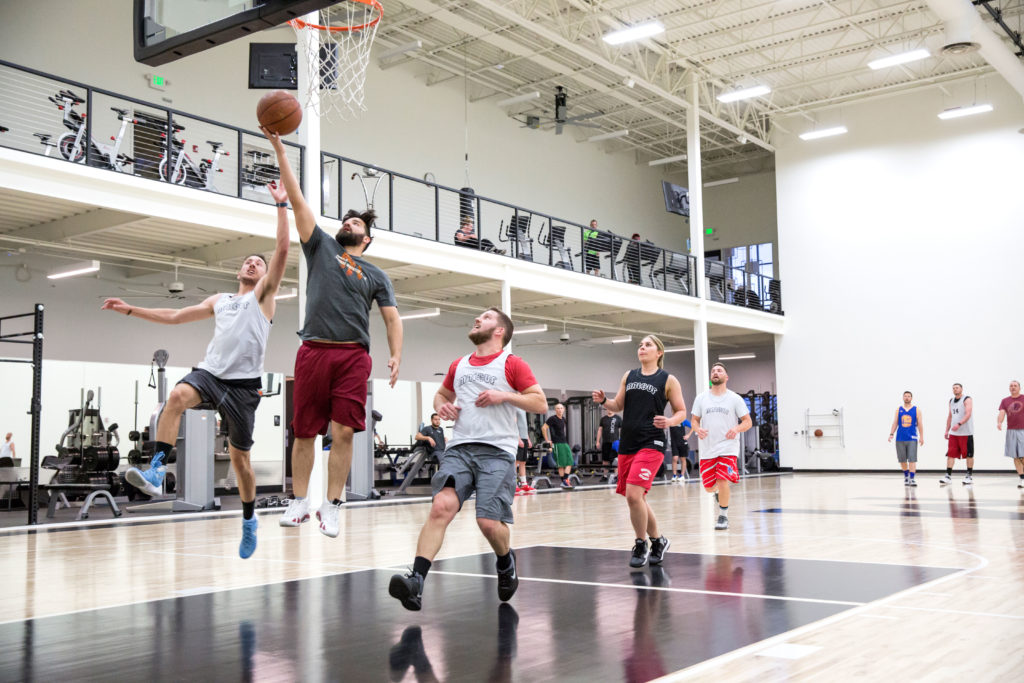 Named the 8th Best Place to Work in the country by Glassdoor in 2019, Malouf has a strong reputation for accommodating their employees, whether it’s free lunches and haircuts, or access to a weight room and gymnasium.

Recently, the job and recruiting website, Glassdoor, ranked Malouf as the eighth-best place to work among the nation’s small and medium-sized companies. And it’s not hard to figure out why, starting with a free lunch provided for employees that is prepared from scratch. The 13-person kitchen staff even grows a lot of its own food in a nearby garden, while also flying in fresh fish from Hawaii.

“Before we moved into this building, Sam realized that having lunch together was a great opportunity for everyone to get to know each other, which leads to better collaboration when it comes to work,” says Leah Anderson, a graphic designer who graduated from USU in 2017.

Malouf also boasts an on-site barbershop/salon, as well as the weight room/gymnasium and free breakfast items in the mornings. The company is also known for hosting great parties during the holidays, and, possibly most importantly, paying 100 percent of their employees’ healthcare premiums.

Blotter says that after Sam first brought up the idea, he talked to some insurance brokers who quickly advised Malouf against it because they had witnessed other companies fail while trying to provide free benefits.

“So, I took that to Sam, and I said, ‘These are their concerns,’”Blotter recalls. “And he said, ‘Blotter, let me tell you, the minute the bottom line becomes more important than our employees, that’s when I don’t want to be a part of this company.’

“And that’s just the kind of guy Sam is,” Blotter continues. “When they were going to build this building, they looked all over, but Sam and Kacie were like, ‘Let’s build it in Logan, Utah.’ We went to school here, and it seems like everybody that goes to school leaves and then fights the rest of their lives to find a job to come back to Logan. Let’s build a great company here where people can stay and work and thrive.’”

“The minute the bottom line becomes more important than our employees, that’s when I don’t want to be a part of this company.”

BLOTTER says he first knew things were different at Malouf when he went for a job interview at the company’s former complex and saw employees skateboarding between buildings. Malouf ’s annual Christmas video from 2018 featured the children of employees working in the role of their parents, and last April Fools’ Day, the company released a press release suggesting that its new headquarters would be a 13-story structure designed to resemble their popular lavender-infused pillow.

But there’s also a serious and socially conscious side to Sam and Kacie Malouf that’s as much a part of their company’s culture as the annual Mad Max Bike Race.

Last fall, Malouf was recognized as a benefit corporation, meaning that while the company still has a goal to make money, it also strives to balance profit-seeking with environmental protection and social responsibility. Malouf HQ in Nibley is a “net-zero” building that creates more power through its solar panels than it uses, and the company has aided local charity organizations nearly since it first became solvent.

But in an effort to expand their charitable reach, Sam and Kacie started the Malouf Foundation in 2016. The parents of five children, the Maloufs already donated money and bedding to Cache Valley groups like Citizens Against Physical and Sexual Abuse (CAPSA) and The Family Place, but since 2017, the foundation has added working with Operation Underground to battle child sex trafficking and exploitation.

“When you meet a survivor, in the flesh, and hear stories that really pull at the heart strings, it becomes impossible not to help,” says Kacie, who now focuses most of her professional time on running the Malouf Foundation. 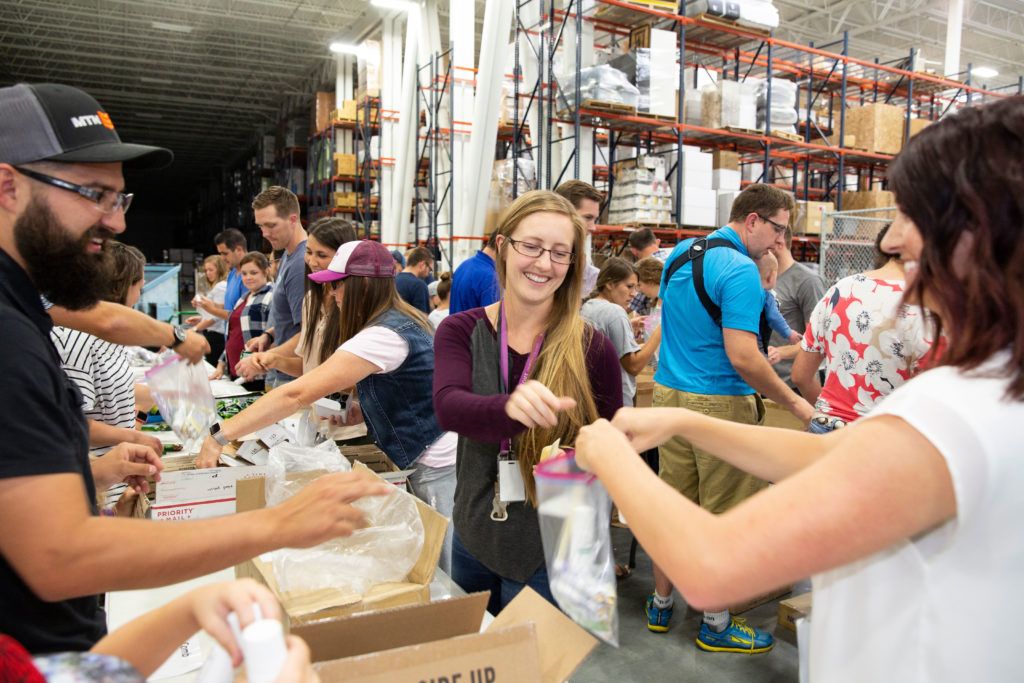 In an effort to help others in their own community, as well as around the world, Sam and Kacie Malouf created the Malouf Foundation in 2016. Employees are also encouraged to volunteer for various causes, and the company pays them up to 24 hours a year for working with charitable entities.

In addition, the company sponsors “Charity Time Off,” a program that allows employees to get paid for up to two hours a month when they volunteer with a charitable organization.

“There’s a lot of great things about working here, but invariably people will say one of the best is the foundation, and I think it will soon be some of the B-corp stuff,” Sam says. “A lot of employees don’t have anything to do with the foundation on a day-to-day basis, but at the base level, they know they’re connected to a group that does something they respect and value.”

He admits he didn’t have any management experience when he and Kacie started the company, and after hiring that first employee, found himself wondering if he should even have added another person, “Because I can do it all faster and better, than having to spend my time training somebody.”

“But I ended up learning a great lesson, and that is that if you invest some time in people, things can really take off,” Sam says.