The Making of Jimmy Moore 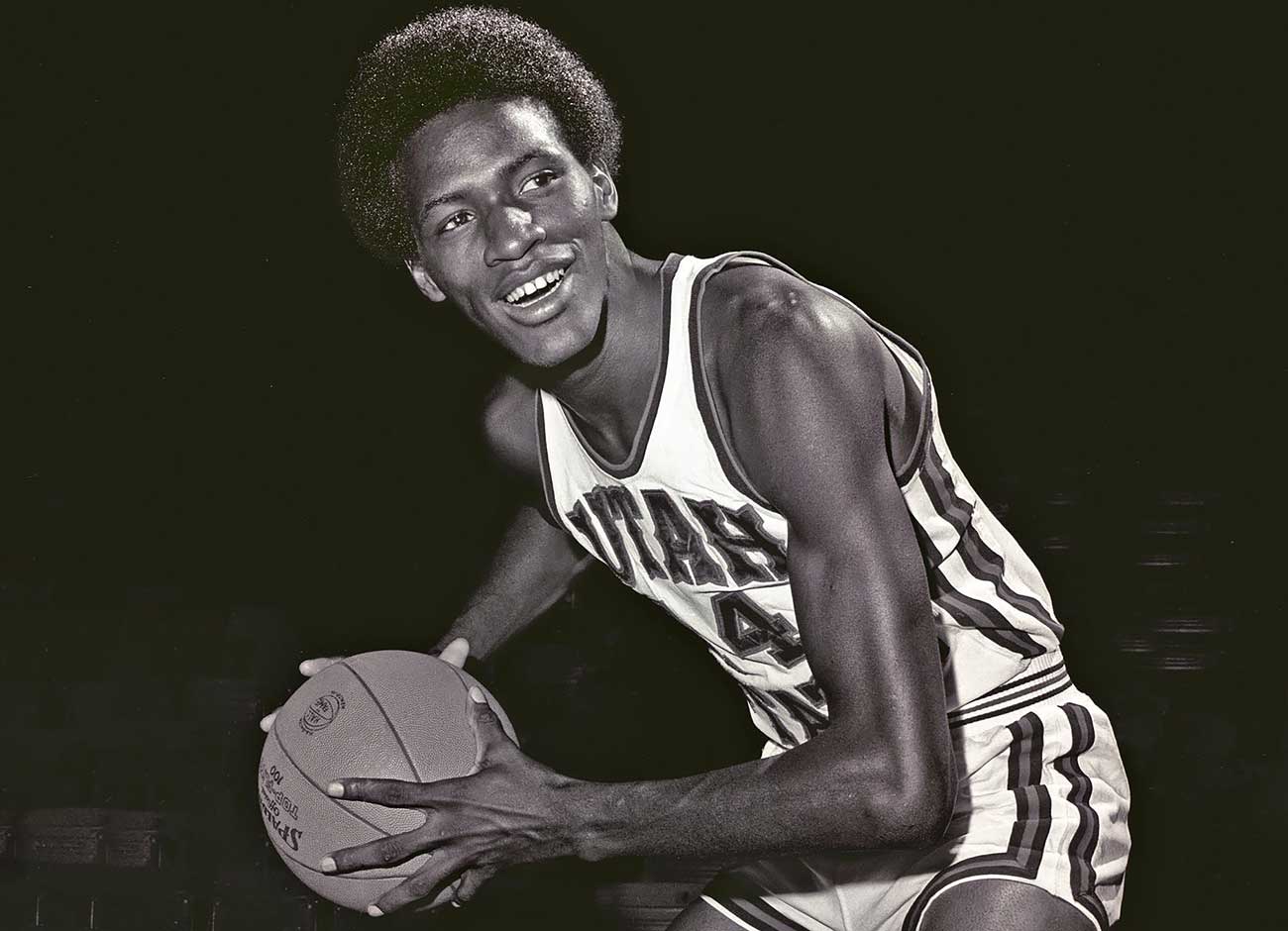 Before he was an Aggie basketball hall of fame legend, before he played with the Seattle Supersonics, Jimmy Moore was “Shimmy”—the tenth child of a pulpwood worker and domestic servant, growing up in the tiny town of Leakesville, Mississippi.

There Black men and women labored in hard, and often risky, jobs in kitchens, the paper mill, or in shipyards on the coast. Moore’s parents were no different. Moore sometimes joined his dad on Saturdays at the mill, ferrying wood chips and saw dust with wheel barrels, cleaning burn pits from log debris, occasionally stepping on hot coals. Sometimes he would deliver dinner to his father during double shifts. Moore would do his homework while his dad tempered the steam boiler. His book Basketball and Some of Life’s Technical Fouls chronicles his unlikely path to Utah State University and provides a glimpse into what school integration was like in the deep South.

“‘Separate but Equal’ did not apply to us because the “white schools” always had the new buses, athletic equipment, uniforms, band instruments, and textbooks,” he writes. “We got the old “hand-me-down” stuff. In a way, I think as a school, athletics program, and band, we wanted to prove that we were just as good and deserving of these benefits as the students at Leakesville High School.”

The book celebrates hard work and family and shows how forces beyond one’s control shape a life.

When I read Basketball and Some of Life’s Technical Fouls it was during the peak of the Black Lives Matter protests this summer. It felt very timely. Why did you write the book?

When I first started writing it was never my intent to publish it into a book. It was just my stories that I was putting into a manuscript for my kids that they could share with their kids. And it just kind of snowballed from there.

I heard it stemmed from a paper you began writing as a graduate student at USU.

When I was doing my master’s in education it was a cohort of 22 people and we were supposed to write a paper explaining to each other who we were. My paper title is what turned into the title of the book. When I read it to the class, people responded. I filed it away until the boys were in high school and worked on it little by little over the years. When I retired, I made a to do list of things I put on there was: finish my manuscript for the boys.

I focused on the schools that were pestering me the most. I figured that was a good sign. – Jimmy Moore

When you were 9 years-old, you survived a bout with rheumatic fever that kept you home from your entire third-grade year of school. Did you have lingering health issues?

My parents were told by the doctor that playing sports would probably be out of the question. They thought I would have rheumatoid arthritis in my joints. Once I healed, I didn’t have anything that hindered me physically.

Interestingly, without getting sick, you may never have found your love of music and joined the marching band led by band director Willie Redfield III. Under his tutelage, you write “Mr. Redfield had us believing in ourselves and in one another. His goal and our goal was to become good enough to receive an invitation to the Mardi Gras in New Orleans.” His mentorship appears to be a pivotal moment in your life. Can you talk about what Mr. Redfield taught you?

We would get together and practice in the morning from 9 to noon to avoid the high heat of the day. It was brutal but it was fun. One of the things Mr. Redfield always talked about was being responsible and caring about others. I think he taught us a lot about leadership and caring about the people around you.

You write that growing up in Leakesville, Mississippi, “you were conditioned to know your place within the community.” How did seeing the differences of separate and truthfully, unequal, affect people and their health?

I can only speak for me and my family. My mom and my dad too, but especially my mom, was very religious. I think her beliefs and her trust in God had a huge impact on us. That you will see things that are unequal just work hard, stay the course, and God will make a way. I think that had a huge impact on the way my parents raised us.

Speaking of your mom, she is a wise figure in the book. In the chapter “Mother Knows Best” she won’t let you work in the fields and pick cotton.

We were always taught by mom and dad to work hard and to earn your way. But at the same time, when the opportunity to pick cotton came along, we couldn’t. It was confusing. It took us awhile to convince her. One day she finally said yes. My brother and I hopped on the truck and went to work in the hot sun all day and made so little for it. I remember coming home and she said, “I wanted you to have that experience.”

It seems like she waited until she knew you were ready for the lesson.

One particularly powerful scene in the book is when your cousins were called squirrels and raccoons and shot at by kids with BB guns because they climbed a tree at your aunt’s house to watch a football game at the “white only” high school. You wrote “We felt there was no need to report these incidents because nothing would be done.” How did this knowledge affect you growing up?

It was definitely a challenging time. The thing about it is, once the schools integrated and we were moved to the predominantly white school, there were hardly any incidents. When you got up north around Jackson and places like that, you were always seeing in the newspapers fights among students and protests. Growing up in a small community like Leakesville, we all knew each other—it was just the system and the systemic racism.

As a high school student, you were heavily recruited to play basketball. How did you ultimately choose Utah State?

I focused on the schools that were pestering me the most. I figured that was a good sign. My parents, they like most parents, didn’t know what the recruiting process was really like. For them it was kind of like whoever could come in and tell the best story and promise them how they were going to take care of their son. But my dad could really read people very well. A recruiter might come in and afterward my dad might say something about that guy I just don’t like. Every time Coach Dale Brown talked with my parents, they always felt good about the conversation.

When I visited Utah State I was introduced to an academic advisor. Afterwards, dad asked how it went and I said, “that’s where I am going to school.” Only then did Dad ask where it was exactly. We got out the big globe. “That’s a long way from home,” he said. I kind of wanted my mom and dad to help me make my decision. I wanted them to say go to the University of Southern Mississippi because it was only about 40 miles from their house and they could see me play. Once I said, “dad where would you like to see me go?” He said, “Oh no, that is your choice. Those are going to be four of the most important years of your life and I want it to be your choice. And wherever you go to school I support you.”

It turned out to be a good decision. You eventually played for the Seattle Supersonics and in Europe before coming back to Utah State to work as an assistant coach.

How many former players get the opportunity to go back and coach at their alma mater?

Basketball has been a central part of your life for a long time. Your sons Grayson and Jalen eventually played basketball for Utah State. You still help with Jalen’s business teaching basketball to area youth. What has the sport taught you over the years?

Basketball has really taught me about sharing myself. Sports is the one thing that has a way of bringing everybody together. It taught me leadership. It taught me how to know how to treat people. Everybody responds differently to different things so sports forces you to learn a lot about people. Especially as a coach, it forces you to learn about people—if you care about them. Because then once you learn about people and what makes them tick and you know how to treat them and how to motivate them.