Father Unto Many Sons

Rod Miller ’75 studied journalism at Utah State, graduated to a career in broadcast, and found his creative footing in advertising. But the former USU Rodeo Team member never lost sight of his Western roots. Miller began crafting cowboy poetry in the mid-1990s and later writing fiction. He’s won four Spur Awards to date, most recently in 2018 for the short story “Lost and Found.”

This micro-excerpt is from his forthcoming novel Father Unto Many Sons. 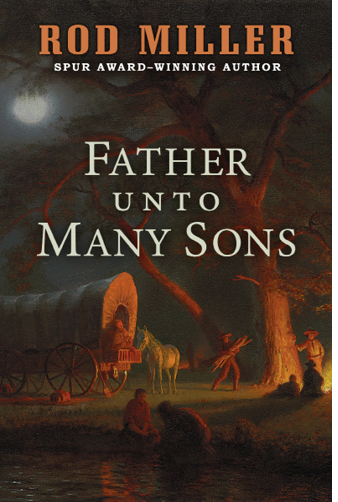 Father Unto Many Sons by Rod Miller, August, 2018 by Five Star Publishing

Blood and vomit mingled in a puddle between Abel Pate’s spattered boots. Head bowed, elbows on knees, he slumped on the edge of the board sidewalk, heaved, and added to the vile stew soaking slowly into the dust. Sweat beaded on his forehead and dripped without splash into the viscous mess. Again and again he heaved until only bile, then nothing but stringy spittle, dribbled from his lips and chin.

Abel’s breathing slowed and the spasms stopped. He sat upright and stared without understanding at the knife in his hand, smeared with the blood of his uncle. Turning aside, he wiped the flats of the blade across the dead man’s shirt and let it rest on the stain. The body sprawled on the walkway next to him, head dangling over the edge, the deep slit across the throat leering at the boy like a wide scarlet smile.

Using the bandana he had knotted around his neck, Abel mopped his face and pondered his next move. The town was dark and quiet. Abel guessed it would be three or four hours yet until dawn. He picked up Uncle Ben’s hat and brushed the dust off it and knew then what he had to do.

He slid his uncle’s heavy knife into the shaft of his boot. He worked one arm out of the long linen duster, rolled the body over, pulled the other sleeve loose and tossed the duster aside. Sweat again moistened his brow as hefted the lifeless feet and rolled the body off the wooden sidewalk that spanned a narrow gap between the stone block building that housed a bank and a wood-framed barber shop. He stepped down and sat on the street, braced his hands behind himself and with both feet pushed Uncle Ben’s remains under the walkway. Even for a boy grown to the size of a man, the dead weight made the job difficult. With the side of his boot, he scraped dirt and litter over the blood and vomit, turning it all to dark mud. Abel knew his work made no kind of concealment but figured it would buy him an hour or two come daylight and that would have to do.

Dusting off his backside with both hands, he slid into Uncle Ben’s long coat. He lacked the dead man’s heft, but hoped it would not be obvious under the duster. Tugging the wide-brim hat low over his brow, he set off for his late uncle’s house, trusting the darkness and his feeble disguise to accomplish his mission.