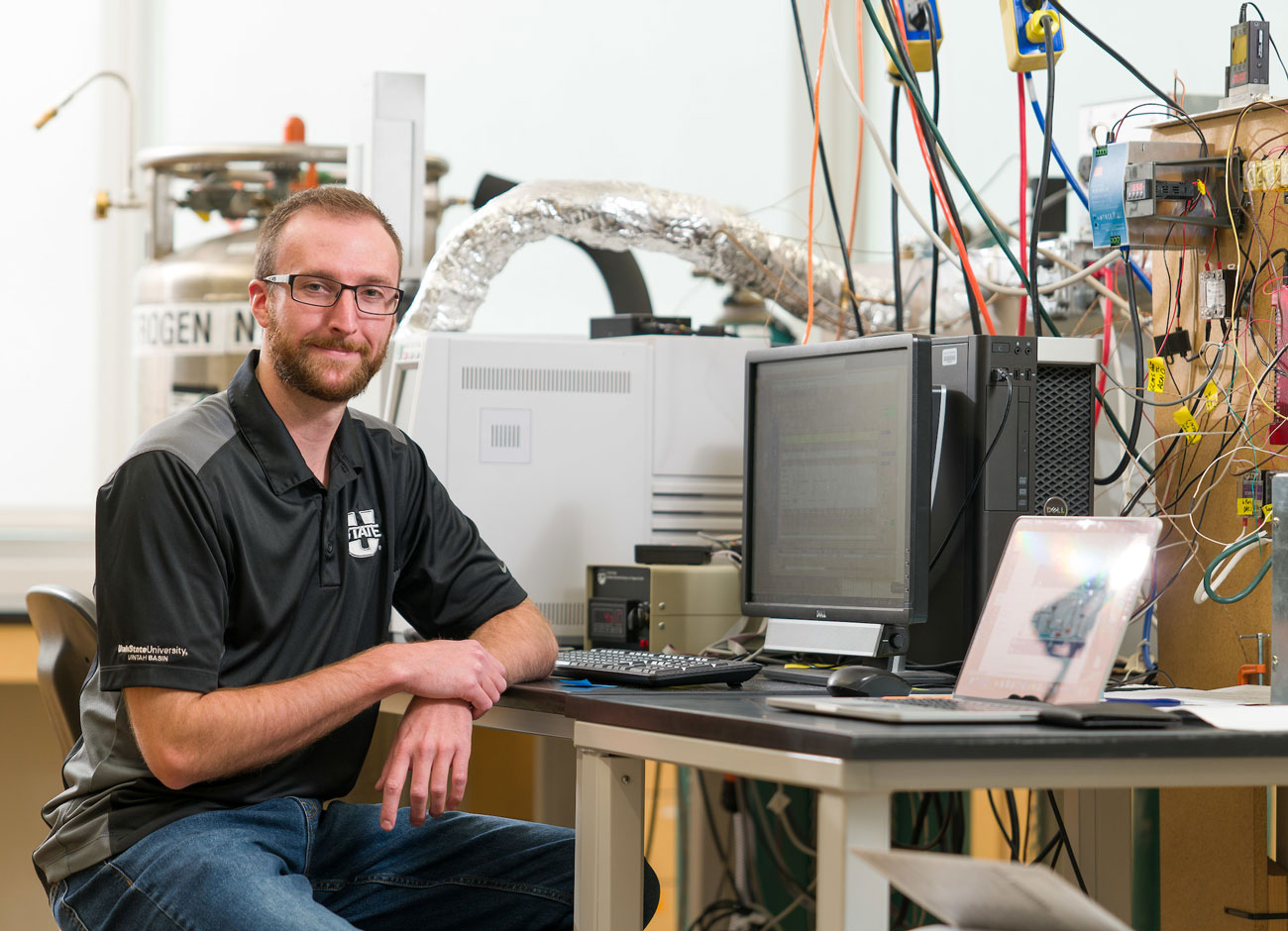 But for a lifelong snowboarder like Tyler Elgiar, who used to dream of working at a ski resort, the journey to the Storm Peak Laboratory above Steamboat Springs, Colorado, is about as good as it gets for a young research scientist.

When there’s snow in the Colorado Rockies, the master’s student takes one ski lift up the mountainside, then snowboards down to another lift. He then takes that lift to access the backside of the mountain, before going up another lift that drops him right near the lab site, which sits at about 10,500 feet.

Then after calibrating and collecting data from instruments designed by researchers at the Bingham Research Center at USU Uintah Basin to measure levels of atmospheric mercury, it’s all, well, downhill for Elgiar from there.

“It’s not bad at all,” he acknowledges.

While getting to Storm Peak is a little complicated, it’s certainly not as circuitous as the route Elgiar took to working on a master’s in toxicology. A native of Vernal, the 29-year-old says he didn’t anticipate attending college after graduating from Uintah High School, but after plans fell through for a career in the military, he started looking into taking some general education classes at USU Uintah Basin while working for a trucking company.

Elgiar soon decided to seek a bachelor’s in wildlife ecology management, but just when he was ready to graduate and pursue a career as a wildlife biologist, he was approached by BRC director Seth Lyman about the Storm Peak project. In addition to senior research scientist Huy Tran and research technician Trevor O’Neil, Lyman wanted a master’s student to help deploy and monitor an instrument which measures the amount of elemental and oxidized mercury in the atmosphere.

Mercury emitted into the atmosphere via either natural and man-made sources can negatively impact wildlife and human health, so the Bingham Research Center developed a dual-channel oxidized mercury measurement system capable of detecting mercury in the atmosphere at ultra-trace levels. It also created an automated calibrator that can verify measurements made by the dual-channel system.

“Before this, I didn’t even know mercury was present in the atmosphere at all,” admits Elgiar. “But I thought about it for about a second; it was just too good of an opportunity to pass up.”

Elgiar explains that not much is understood about how mercury is oxidized in the atmosphere, so the hope is that through the collection of data, scientists will better understand how mercury behaves in the air, and, in turn, help stakeholders make informed decisions on how to best mitigate the metal’s negative impacts on humans and the environment.

The Storm Peak project, done in collaboration with the University of Utah, the University of Colorado Boulder, and Colorado College, got underway in March 2021 and is scheduled to continue through at least the spring of 2023. Similar BRC-designed instruments have already been deployed in the Uintah Basin, as well as Nevada and other locations in Colorado, and Elgiar says Lyman is eyeing placing some in the Arctic in the future.

“This is a one-of-a-kind system that Seth developed, and our group has continued to develop and improve upon,” notes Elgiar, who was named the USU Uintah Basin Undergraduate of the Year in July 2020, has traveled as far away as Poland to attend conferences and share the BRC team’s research with other scientists.

“I couldn’t have asked for a better mentor than Seth. He’s the brains behind the operation,” Elgiar adds. “These are novel instruments. So, it’s exciting being on the leading edge of atmospheric mercury research and sampling techniques in the atmosphere.”