Look Back: Planes, Trains, and Wi-Fi 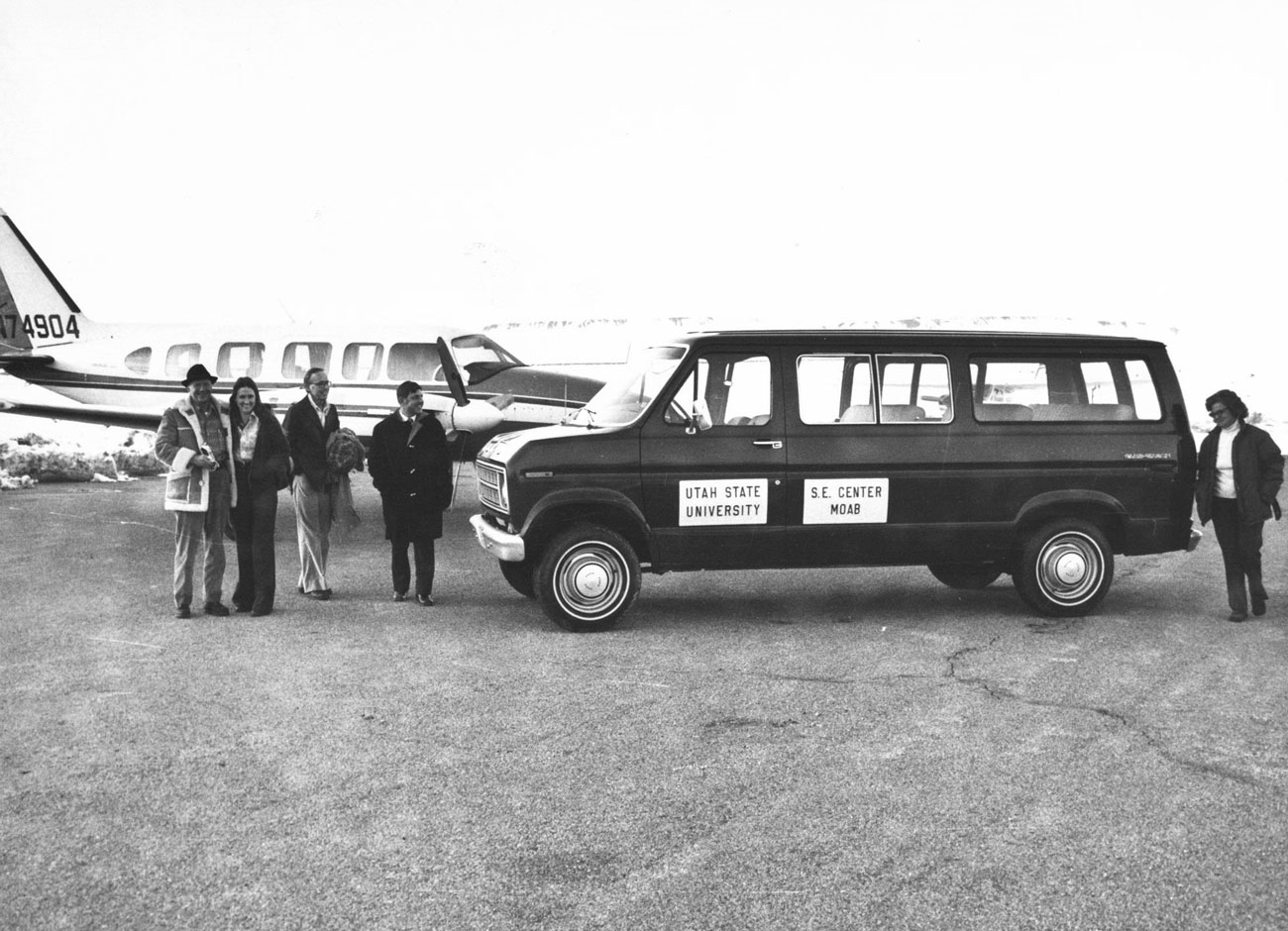 For decades, Utah State University professors climbed aboard small aircraft in Logan to hop over 13,000-foot peaks to teach in the Uintah Basin and return the same night, landing long after the valley was asleep.

The effort was “not for the faint of heart” retired USU English professor Glenn Wilde recalled in the book Upon the Shoulder of Giants: A History of Utah State University’s Regional Campus System 1967–2015 by John Barton (USU Provost’s Office, 2016).

“One time while landing in Roosevelt, the runway was iced over and the plane was unable to stop,” Wilde noted. “It skidded past the end of the runway and through a barbed-wire fence before it finally came to a halt in a farmer’s field. There were no injuries, just pale and scared professors, but most continued to come down from Logan.”

Former USU President Stan Albrecht remembers a similar harrowing flight during a snowstorm pummeling the Uintas. After collecting faculty members in Vernal, the plane was unable to land in Roosevelt and the pilot flew west, eventually picking up the lights of the I-15 and following them to Tremonton.

“The wind was blowing so hard that he couldn’t land at the regular airport,” Albrecht says over Zoom with a smile. “We all got off and sort of kissed the ground. I drove to Roosevelt from that time forward.”

He chose to go, and keep going, because he knows what it’s like to grow up in a rural community without access to higher education. Albrecht was raised on a 40-acre farm in Fremont, Utah, by a father who was a voracious reader and a mother who wrote poetry and dreamed of a college education. They didn’t have much money, but wanted all six of their children to go to college.

“Certainly, in [my mother’s] eyes it wasn’t a question of if, but where,” he says. That life experience “created something in my soul that caused me to want to give back, to want to create those opportunities for others.”

ON THE ROAD AND IN THE SKIES

The flying professors are part of USU’s mission to bring higher education to people in far-flung corners of the region. It began in the early 1900s when USU (then the Agricultural College of Utah) faculty traveled by rail to demonstrate agricultural techniques in Utah and Idaho. As early as 1911, the university began offering courses conducted by correspondence — the snail mail version of today’s online education.

USU’s fly-down program lasted nearly 30 years from 1967 to 1996. The first flights were in a Piper Navajo twin-engine plane before the university acquired a Bonanza Beechcraft flown by Leon Hill, a faculty member in the university’s aeronautics department. Upgraded airplanes aren’t the only advances that propelled changes to USU’s distance learning for the better.

“The development of USU’s distance education parallels and mirrors the growth of technology and transformation of public higher education,” Barton writes in Upon the Shoulder of Giants. “Delivery of Utah State courses has progressed as professors traveled to deliver lectures and courses using horse and buggy, train, automobile, air-flight, telephone transmission, and presently satellite and internet delivery.”

Barton himself witnessed the system modernize and grow over the last 35 years. In 1988, while finishing his graduate work in history at Brigham Young University, he was offered a one-year teaching appointment at the USU Uintah Basin Education Center. Classes started a week later. Barton still needed to write his thesis and already had a fellowship at the Redd Center of Western Studies, but he accepted the job and put nearly 20,000 miles on his car. It marked the start of a four-decade USU career.

“I feel very much like the Lord gave me that job,” Barton says. “I am far from the only person who teaches at Utah State who feels that their job is more than a job, it’s a calling.”

It was also a homecoming. Barton grew up about 20 miles from his Roosevelt office, which wasn’t exactly bursting with employment opportunities. Before USU established a presence there, “if a farmer had four sons, three of them had to leave to make a living,” he recalls. “Obviously, the oil industry made a huge difference there, but so too did the education system.”

USU’s original footprint in the Uintah Basin was modest. In the 1960s, the legislature passed a bill to open USU’s first off campus branches in Roosevelt and Moab. Classes in the Basin were held in a one-room storefront taught by traveling professors. Initially, courses were scattered in county buildings, Extension agent offices, or public-school auditoriums, Barton says. They also might be conducted entirely over the telephone.

“The B-net was solely a dedicated audio line so that the students could only hear your voice,” he explains. “When they would have a question, they would have to cue the mic and interrupt the teacher, identify themselves, and speak up. It worked. It really did work. Students had to want to be there.”

At 32, Barton was younger than many of his students and shuttled between a rotating set of classes in Vernal and Roosevelt. As new technology came along, it felt like a huge advancement.

The next version included a two-way audio and visual broadcast of the professor and the classroom that operated with a 30-second delay that was eventually replaced with a full motion video that also had a notable delay. (Imagine a clunky precursor to Zoom.) The statewide campuses now use interactive video conferencing (IVC). By continually adopting better technologies, USU’s statewide campuses increased academic options and built flexibility into the system as courses could be held in person, via IVC, online, or hybrid formats. It just took some getting used to.

“There is not one way to do it and to do it well,” Barton says. “I have adopted and adapted to the changing technologies although, ironically, I am not a very techie person. Thank goodness there has always been IT people who can do it and who can show me how to do it. I can learn.”

That attitude reflects how the statewide campus system has operated since its inception. While integrating new technologies out of necessity, the campuses became incubators for piloting
and validating new distance learning methods. For instance, a decade ago Mike Christiansen, ‘04, an associate professor of chemistry in the Uintah Basin, began using a flipped classroom where students watch a lecture — often over YouTube — before attending class and use meeting times to ask questions and work through problems. By regularly integrating technology with teaching, shifting to an online format during the COVID-19 pandemic was easy for Christiansen.

“I was able to seamlessly shift from flipped IVC to fully online teaching using Zoom, from my home office,” Christiansen, writes over email in June. “There was only one piece of equipment I needed but lacked: a digital writing tablet.”

Faculty like him were prepared for the unexpected. In March 2020, within days of suspending in-person classes, the university shifted entirely online. Barton believes one silver lining of COVID is that more faculty are trained and willing to teach using distance education delivery.

“Utah State has been an international pioneer,” he says. “We have been on the cutting edge of the technological classroom forever. And we have done a very poor job of singing our praises.”

USU’s 30 statewide campuses and locations are an outgrowth of the university’s Extension service. They were originally housed under USU Extension until 2006 when Stan Albrecht, then USU’s provost, moved to get them under the provost office like the rest of USU’s academic offerings to ensure consistency across curriculums.

We wanted to make sure we were providing the same experience to regional campus students, many who are married with families and jobs and can’t pick up and move, Albrecht says. “Taking the education to them was really, in many ways, the only way.”

This transformed the statewide campus system and helped expand it, Barton explains, adding that “we had no political clout beyond persuasion that this is good for students in isolated areas, this is good for the state — [But] Stan did.”

Over the years, the number of degrees has increased from a handful of associates degrees to 35 bachelor’s degrees, 27 master’s degrees, and three doctorate degrees in 2022. There are now more than 170 full-time statewide faculty members. Albrecht credits much of the expansion with USU’s merger with College of Eastern Utah in 2010, as well as a commitment to build additional facilities.

“The building is a physical structure with quality classrooms and quality instructional opportunities but it is also highly symbolic in the community”, he says. “It signals to those communities that USU is going to have a long-term presence there.”

USU has heavily invested in upgrading infrastructure over the past 10 years with new buildings or remodels in Brigham City, Kaysville, Salt Lake City, and Moab. Most recently, the legislature
approved funding to support a new building in Monument Valley, which will benefit the Navajo Nation. Barton attests to the difference having a physical structure makes.

“As soon as we got the building [in Vernal] there was a change in perception in the community, a change in perception from the students,” he says. “It was not just as President Taggart said, ‘a fly by night operation.’ … We now have hundreds and thousands of people with enhanced careers and enhanced lifestyles because of Utah State distance education. And we’ve had so many students who are first-generation college students. It changes the way the whole family views what is within their reach.”