Home / Health  / When Pain Is Silent

When Pain Is Silent 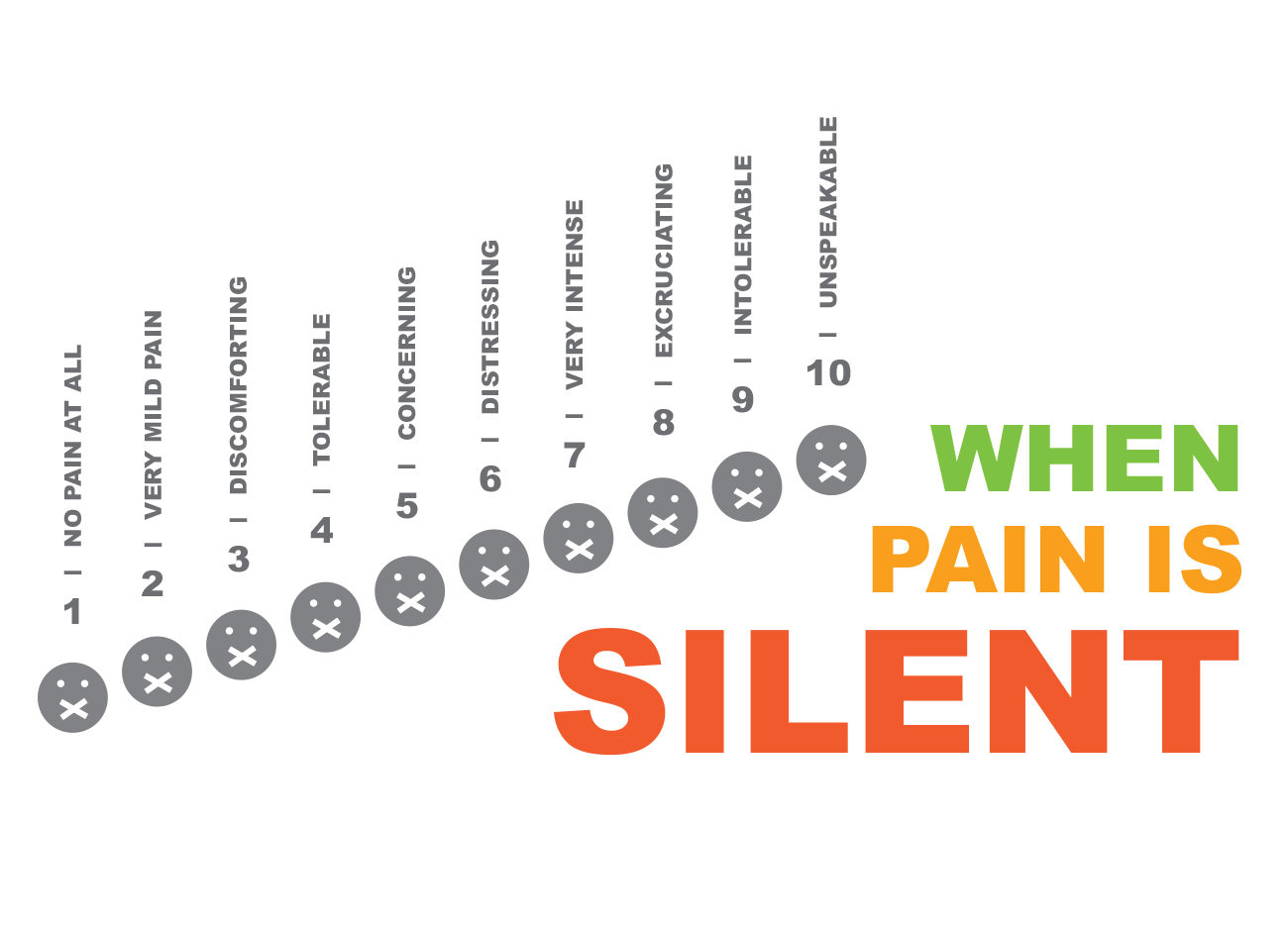 Imagine you are in the emergency room with your child. Inside, you are feeling the natural anxiety parents feel when they know their child is suffering.

Now imagine that your child has chronic health care needs. And that she is unable to tell the doctor what is wrong, or where it hurts, or when it started.

That is the situation Tina Persels faced in 2017. Her son, Adam, doesn’t cry when he’s feeling pain, but he does show agitation and combativeness. He loses sleep. “Adam has always been kind of a hard one to understand,” she says. He has neurological deficits and autism, and his emotions don’t manifest the way a typical person’s would.

The Persels family saw a lot of pain indicators over a period of two weeks. “We were seeing a crisis. We took him to the ER because he was so combative and restless.” They were told it was constipation.

That was the family’s first visit to the ER. Two more visits followed, with a diagnosis of migraines and, again, constipation.

Persels, who knew people at Primary Children’s hospital, called them in tears.

“It is such a helpless feeling when you can’t help your kid,” she says. “You can’t eat, you can’t sleep, you just want him to feel better.”

She asked—for the second time—if a CT scan could be done. This time it happened, and it revealed a broken shunt.

The shunt had been put in when Adam was four years old. It drained fluid from his brain into his peritoneal cavity, where it was absorbed into the body. When it stopped working, it resulted in tremendous, potentially brain-damaging pressure in his head. For Adam, the agony had gone on for two weeks.

The Persels family is not alone. Many parents of children with special health care needs have had frustrating experiences in the ER, and with health care in general. But Persels is on the parent-faculty of the Utah Regional Leadership in Neurodevelopmental Disabilities (URLEND) program, and through her frustration, she recognized a teaching opportunity.

The Utah regional program is one of 44 throughout the United States, focused on taking an interdisciplinary approach to training future health care leaders. URLEND covers five states: Utah, Idaho, Montana, Wyoming and North Dakota, It connects trainees with professionals from different fields to provide optimal services to children and adolescents with special health care needs. Faculty and participating graduate students come from several institutions, including Utah State University, where the program is affiliated with the Center for Persons with Disabilities. URLEND also includes professionals in the field, parents of children with disabilities, and adults with disabilities as participants and faculty.

The program invites its participants to submit ideas for group-study projects. In 2017, Persels suggested studying the effectiveness of pain assessment in nonverbal patients. Her idea was accepted and a group  from the University of Utah, USU, and the University of Wyoming joined her to study the issue. They examined the need for a better way to assess pain, as well as the effectiveness of current pain assessment tools, through a survey that went out to health care providers and parents. The survey allowed parents to tell their stories. The team was surprised at how many written responses came in, and how much frustration was expressed.

The survey revealed more than 90 percent of parents who responded had difficulty telling if their child was in pain at least some of the time. Most—75 percent—had gone to the ER hoping for answers, and returned home with either an incomplete diagnosis or the wrong one. Parents and providers both wished for a more effective tool for diagnosing pain.

Cesar Galdamez, a doctoral student in USU’s Department of Special Education & Rehabilitation, took the survey to Latino families of children with disabilities. They had their own stories to tell with yet another level of complexity—language and cultural barriers between themselves and the medical staff.

“Sometimes there’s not good communication, and there’s no resources for the clinics or the staff to have a really good interpreter,” he says. “It’s really difficult to get someone that can approach families in Spanish.” Sometimes, they are helped by a Spanish speaker whose interpretation skills are not good enough for the family to understand what they need to do.

Other times, an English-speaking sibling is given the task of communicating complicated messages to the family. It’s a cringe-worthy situation for parents: not only is critical, technical information put in the hands of a child, but the parent loses the ability to communicate serious family health issues to their child-interpreter in their own, age-appropriate way.

“The purpose [of the study] is to create sensitivity to the institutions that this message needs to go to the families and the message needs to be clear, because sometimes they are not getting it,” Galdamez says. As for Galdamez, who came to the United States from El Salvador with degrees in law and political science, the study added to his interest in policy and its effects on people of diverse cultures who also deal with disability.

Project participants had other thoughts to share with health care providers—some pain assessment tools were ineffective for children, and many parents felt as if health care providers did not take them seriously. They would leave a facility frustrated, often in spite of providers’ efforts to help them.

More training would help, says Madison Deutsch, an URLEND participant and graduate student clinician in the Department of Communication Disorders at the University of Wyoming Speech & Hearing Clinic. Wyoming is so rural that maybe a practitioner has had one or  two patients with neurodevelopmental disorders, she says. That means many parents choose to travel longer distances to find a doctor with experience.

“A lot of [Wyoming] families go down to Denver,” Deutsch says. “As we grow our knowledge and our expertise, they’ll be able to find the care they need closer to home.”

She joined URLEND to give herself more interdisciplinary training. “For a year and a half, I worked at a community-based provider here in Laramie for adults with developmental and intellectual disabilities,” she says. “I had some clients be abnormally aggressive, lethargic, or sad for weeks before a urinary tract infection, sprained limb, or a decayed tooth was identified.”

It was her first look into the need for reliable pain measures, especially in a population often overlooked by research. Deutsch presented the group’s findings at the American Speech-Language Hearing Association Convention in Boston in November. The URLEND experience, including reading the parents’ comments affected her. “At the end of the day they know their children better than we do.”

Erica Lundahl underscores that message for URLEND participants. She is a mother of a child with disabilities who also participated on the project.

“At first it was a little bit intimidating, because [other participants] were coming in and giving their whole resumes,” she says. “As the classes went on, I realized I had something to bring to the table, because I had experience.”

For some clinicians, working with children with special health care needs was theoretical. For her, it happened every day. She told them what behavior from professionals was helpful and what wasn’t. Like Galdamez, she helped gather the perspectives of parents who had taken their nonverbal children to the doctor.

Melissa Mower, a nurse at Primary Children’s Hospital, will take her involvement in URLEND a step farther, using it as the basis for her closing project for her Doctor of Nurse Practitioner degree at the University of Utah. She is testing the effectiveness of an algorithm developed by clinicians specializing in children with special health care needs to guide health care providers through a more comprehensive process of diagnosis.

“I knew it was an issue but I didn’t know how big an issue it was,” she says. She would give parents a survey for their children to assess how much pain they were feeling by pointing to pictures of smiley and frownie faces. “They [the parents] would just laugh because it was such a problem for them.”

It was a problem for Adam Persels, too.

“When you have someone like him, a pain scale with smiley faces to sad faces isn’t going to work,” Tina Persels says. Seeing her son in pain was hard on her and her family, but she acknowledges it is also hard on providers. A better pain assessment tool would help.

“At least they would not be grasping at straws. It gives them a path to follow,” she says. “Seeing families in crisis makes them feel helpless, too.”