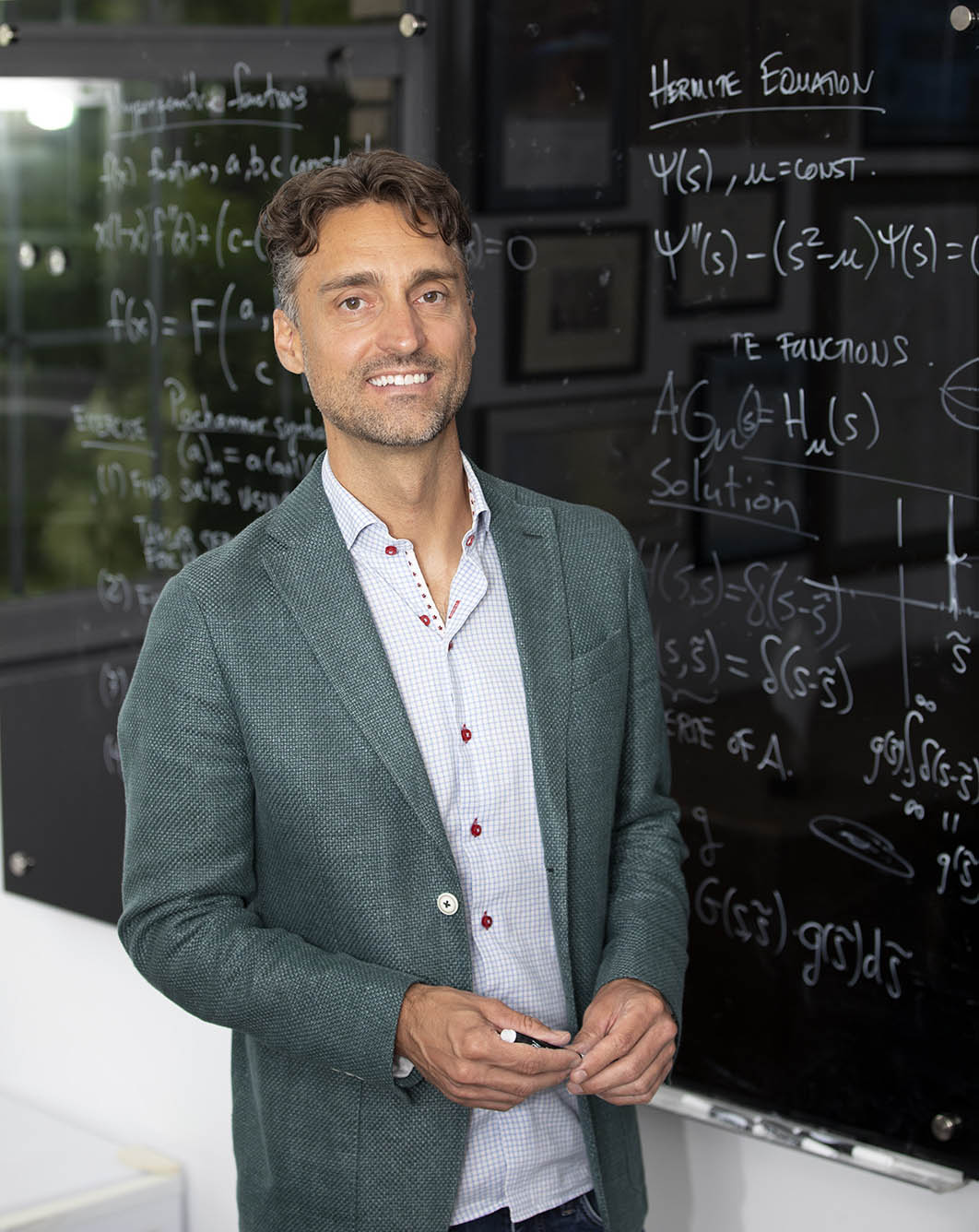 To this day, Nathan Geer, an accomplished Utah State University mathematician, cannot read many words if you single them out. Put them together in a paragraph, though, and they suddenly take on meaning.

He loves relationships. Like what happens when you take Calculus 1 in the second semester of your freshman year and you are not doing very well in it until you meet a girl that you want to impress in your study group. You prepare by doing all the problems beforehand. You learn it so well that by the time the study session begins, you can teach her the material.

Geer laughs as he tells that story on the third floor of his cramped corner office in the Animal Science Building overlooking the Quad. He lost the girl but got an A in class. “I think it made a difference in my continuing in math,” he says. And the deeper Geer delved into abstract mathematics, the more he began to excel. His specialty, topology, focuses heavily on the relationship of ideas and words.

It’s in the simple interaction with others that he shines, like when he challenges you to play a game with him involving 10 to 12 columns and rows crudely drawn on a piece of paper. You move coins (or in this case, paper clips) up and down the page with the goal of trying to get your opponent to run out of moves before you do. His only hint: what happens in those first two actions are of optimum importance. Despite the clue, he proceeds to crush you anyway. You console yourself knowing that this Einstein who just clobbered you with his paper clip is also an international leader in the field of quantum topology, who, after six long years, created the theory of re-normalized invariants. To try to wrap your head around that, you might want to imagine transforming a donut into a coffee cup.

What is not hard is to picture Geer as a professor, although he looks more like a Tour de France racer than an academician. In 2015, he won a prestigious CAREER award from the National Science Foundation, a five-year, $450,000 grant to develop his renormalized quantum invariants theory.

Geer has an easy smile and hearty laugh. If he can’t make a point, he may resort to a game, or a story, or just some quiet space for you to talk. He understands what it feels like to be overwhelmed by symbols and letters. What it is like to confront pure mathematics “that is rooted in words and ideas rather than numbers and algebraic equations,” as he described in a 2013 talk he gave for his College of Science University Faculty Researcher of the Year Award. “At first glance, these words and ideas seem foreign and unrelated to the natural worlds. However, pure mathematics is the language of modern physics.”

He has a complicated relationship with language, but he has grown to appreciate it for being the messenger, not the enemy, and for being the last essential stop on the train of thought. And, he loves to think. It was a liberating discovery that college afforded him. “When I got there,” he says, “I thought, ‘Oh, this is amazing! I want to just keep thinking and learning.’”

He has a complicated relationship with language, but he has grown to appreciate it for being the messenger, not the enemy, and for being the last essential stop on the train of thought.

Calculus was his path, and eventually, its more rigorous form—mathematical analysis. That is when he first encountered proofs. In calculus you have what is referred to as limits, which is what happens when something gets arbitrarily close to another point. So while “arbitrarily close” can be a theoretical notion in the real world, it can be a precise, useful concept in mathematics, he says.

It is the precision and playing with those relationships that he loves. Newton, through calculus, solved planetary motion and, in the process, provided a tool for predicting all kinds of different things in the world. As a result, a completely new field of classical mechanics and physics was developed that gave humans a universal language for abstracting more ideas.

“And so what happens when you abstract calculus? You make it in more dimensions,” Geer says. “You talk about different relationships between a distance and two points. It amounts to a different kind of geometry that Einstein used to describe what we now understand as relativity.”

Einstein is also thought to have suffered from dyslexia. He once told his friend, psychologist Max Wertheimer, that “These thoughts did not come in any verbal formulation. I very rarely think in words at all. A thought comes, and I may try to express it in words afterwards.”

What Geer does talk about is getting stuck and how he tells his students not to feel badly about it when they do. Even if you’re the most brilliant mathematician, there are going to be problems you are not going to be able to solve that you will dwell on, sometimes for years. That is what being a mathematician is all about—making sense from disorder, like words on a page.

“It’s mostly constant confusion,” Geer says. “But then, every once in a while, you have this amazing insight, like you have this point where it all comes together, and it’s perfect.”