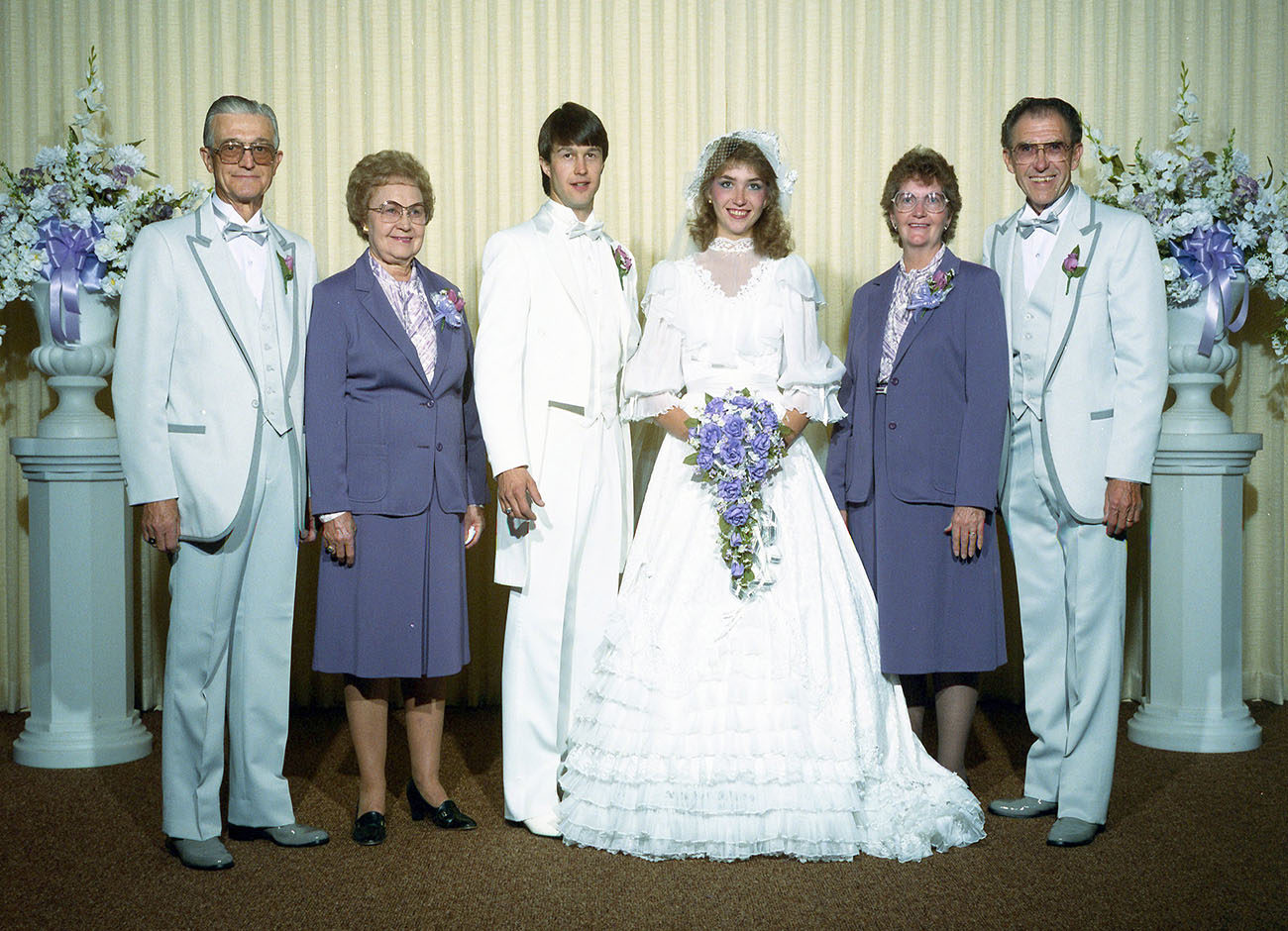 “Why is there cookie dough under the bed?” my 15-year-old mind wondered as I searched for my shoes, but found a pan of carefully made, aging dough balls instead.

“Did you just want to see me, or did you really need a ride?” my friend joked as I got into his car. We were both surprised to see my car sitting in the driveway since my mom had said it was gone.

“Why are we getting notices of unpaid bills?” puzzled my dad as he opened the mail. My mom had taken meticulous care of the family finances for over 35 years, and this had never happened.

These peculiar events took place circa 1978-1983, and my family and those around us had answers to none of these questions. We were baffled as Leah Smith, my very capable mother in her early 50s, began doing curious things that went beyond just being forgetful. She began to talk less because she got confused, and it was easier to stay quiet. The delicious Christmas dinner and carefully thought-out presents she loved to give didn’t show up one year. As we rushed to find something to cook for 30 people and gifts to wrap for the grandkids, we realized there was something terribly wrong because she would never just forget Christmas.

In 2019, Alzheimer’s Disease is familiar and formidable; but in the early 80s, most people couldn’t pronounce such a word, let alone know of the terrific challenges and heartache it would bring. Luckily, or unluckily, for us, ignorance was bliss, and we had no idea what we were in for.

My fiercely tenacious father, Jay Smith, began searching for answers, starting with our family doctor who wondered if she had a virus attacking her brain. My dad would later have tried a dozen or so pathways as he fought to keep from losing his beloved wife as he knew her. They visited doctors in every specialty he could think of, tried vitamins and juices, massage therapy, and holistic approaches. He read everything he could get his hands on.

In 2019, Alzheimer’s Disease is familiar and formidable; but in the early 80s, most people couldn’t pronounce such a word, let alone know of the terrific challenges and heartache it would bring. 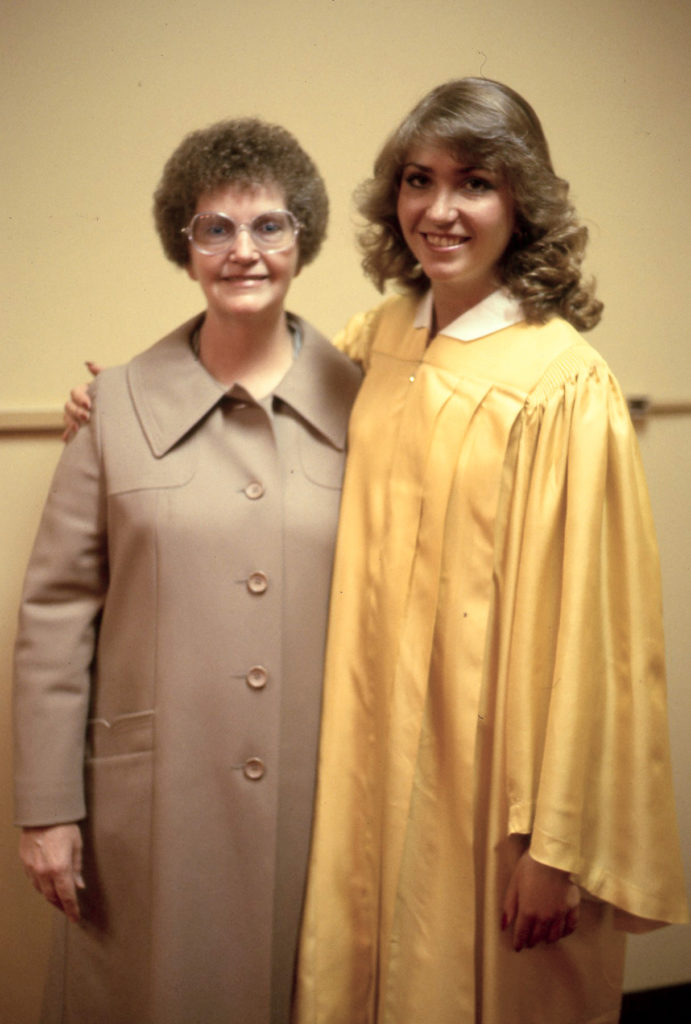 As our search for answers continued, I graduated from high school and attended Utah State University, which was only blocks from our house. I worked on campus and lived at home so I could help my parents. Just before my sophomore year of college, I became engaged to my high school sweetheart, Todd, who grew to be an amazing, lifelong support to me and our family.

As I started making wedding plans, my sisters who lived away helped from afar. But as I watched engaged girls I knew shop for wedding dresses with their mothers and visit reception centers together, loneliness sunk in. Todd was a great help, but he had never planned a wedding, and I longed for the expertise of my mother of six who had extensive experience in this area. Though she looked like she could help, her memories, skills, and personality were fading. In spite of my sadness, I resolved to move forward and involve her as much as I could. It often either ended in tears or laughter, and I soon learned that laughter would serve me best.

When we shopped for her dress for the wedding, she tried one on and stood in front of the three-way mirror. I could see the look of confusion on her face as she looked at her reflections, and I realized she couldn’t process how to get out of the mirrors. I helped her, and the clerk, who my mom had known for years but didn’t recognize, asked if she had been sick. Not knowing how to answer, I said something about a virus and fought back tears as I helped her dress and led her out of the store.

On the flip side, as I addressed wedding invitations, I thought she could help put stamps on the envelopes. I showed her how, and she seemed to understand. I left the room briefly and came back, only to see stamps stuck all over the table, envelopes with five or six stamps going in all directions and some with stamps on both sides. We wasted a lot of money on stamps, but she started laughing and so did I, and that felt much better than tears.

The day of my September wedding, she was very quiet. I wanted to think she was feeling contemplative about her youngest child getting married. However, I knew it was her best coping skill for not getting confused when she spoke. My dad did all the talking as people came through the line, and she just smiled her sparkly smile.

In November of 1983, after four years, she finally got a diagnosis from a doctor at the University of Utah. She had a deteriorating brain disease called Alzheimer’s. They still didn’t know much about it, but it seemed there was no cure.

My parents cried when they called and told me. But, as per usual, my dad quickly snapped into his tenacity mode and continued his research on vitamins, exercise, and what doctors around the country were saying. 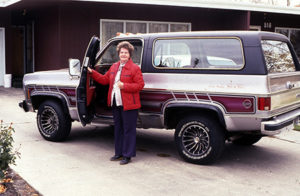 As he did this, my mom’s decline continued, yet he still had several years before retirement. We did what we could to help while juggling school and work, and my siblings helped fill in, but my mom needed full-time supervision while my dad worked.

Gratefully, my mom had amazing, life-long friends who saw my dad’s stress levels increase and came to his aid. About a dozen women were organized into 4-hour shifts to be with her while he worked. I know it was heartbreaking for them to see someone they had known and loved for years no longer recognize them. But they bravely forged ahead and took her for walks and rides, shopped with her, and took her to their homes. These selfless women did this for nearly two years until safety became a concern.

One stormy night, my mom wandered out of the grocery store while shopping with my dad. He was panicked as he searched for her. Finally, because of a flash of lightning, he could see her silhouette in the parking lot. She was drenched, cold, and confused. He was distraught that she didn’t even know how to come in from the rain. Another time, she started a small fire in her friend’s kitchen by turning on a stove burner that had paper on it. Her situation was becoming dangerous, and it was time to make yet another change.

We heard of a new program at Logan’s Sunshine Terrace care facility called an adult day center. It was made for families like ours that needed help during the work hours. The director, Bonnie Smith, became our dear friend, and she was the brains and heart behind the program. She provided enjoyable, stimulating activities and music therapy. My mom loved it there, and we loved knowing she was safe and cared for. 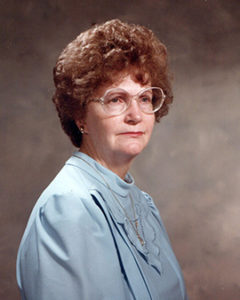 My dad also learned about the local Alzheimer’s Support Group, which we hoped could provide information and understanding. Though it was informative, I was the youngest person there by about 40 years. It was difficult to hear a 60-year-old talk about her 85-year-old mother’s memory decline when I was in my 20s and my mother was in her 50s. These meetings often left me feeling like we had truly been robbed.

When my mom was about nine years into the disease, my dad retired. Around this time, Todd and I learned, to our surprise, that we were expecting twins. I was working full-time at USU as he was finishing his last year of school and working, and, suddenly we would be parenting not one baby, but two! We were excited and terrified. Luckily, our twin boys were easy-going babies since we were in the throes of caregiving for both the young and the old. It was not uncommon to have a double stroller in the trunk next to a walker and/or wheelchair with supply bags for everyone.

As my mom’s health changed, so did my dad’s. Chest pains became fairly common, and he looked thin and tired. We worried that we could lose him before my mom, who was actually in excellent physical health because of his attentive care. But anytime we mentioned a full-time care facility, he would adamantly dismiss it and say he was fine. His six children finally had a family intervention and told him, for his own health’s sake, that it was time. He was mad at us, but deep down, he knew it was true. Though taking her there gave us feelings of sadness and guilt, it also brought relief. My dad would spend all day with her there, but at least he could go home and sleep at night. He started to look and feel better, and his stamina returned.

Our twins and their long double stroller became regulars at Sunshine Terrace. My mom always lit up when we brought them to visit, and though she didn’t know who they were and couldn’t communicate, she would smile her still-sparkly smile in delight. When they were old enough to talk, they told us they had two grandmas—Grandma Reese and Grandma Rest Home.

There were many years of ups and downs with her health at Sunshine Terrace. More than once we thought she was near the end, so we called everyone home, only to have them arrive and her suddenly perk up. Preparing for death with all its sorrow, only to have her rally was emotionally exhausting. It was a rollercoaster we wanted so badly to get off.

We had learned there were things much worse than death.

After five years in the rest home, her system began shutting down for good. She died on Jan. 4, 1992, at age 68 after this brain-robbing disease took 16 years of her life. It was bittersweet, as we had learned there were things much worse than death, and we had grieved her many times over. But the finality of having her physically gone was difficult.

Concern for my own brain health loomed over me during those years of caregiving, and as I neared age 50, I was full of dread and anxiety that if it happened to her, it could happen to me. Would I start putting cookie dough under the bed? Would I lose the sweet memories of my grandchildrens’ hugs, the feelings of accomplishment that come after doing something hard, time spent with family and friends and biking in nature? Would my close friends, too, feel sadness at me not knowing them after 20-40 years of friendship? Would I put my children and husband through the same sorrow and exhaustion I had gone through?

These feelings became intense, and I worried my way through ages 52 and 53. As 54 approached, the anxiety eased some, and I took comfort knowing none of my siblings had the disease. After recently turning 55, my thoughts have focused less on if this will happen to me, and more about simple gratitude—for every day I get to have, for my amazing husband and family, wonderful friends, my great job, and my health. I have also become appreciative of what I’ve learned. It was painful to begin losing my mom when I was just 15, but in hindsight, it has shaped who I am. I learned patience, empathy, that people are so kind, and that it’s okay to feel angry and frustrated. I learned we should cut everyone a little slack because we don’t know what they’re going through, or have gone through, and that every day should be cherished.

A friend who served in the Army and saw his share of sadness and hardship said it best when he returned: “Every day is a holiday; every meal is a feast.” 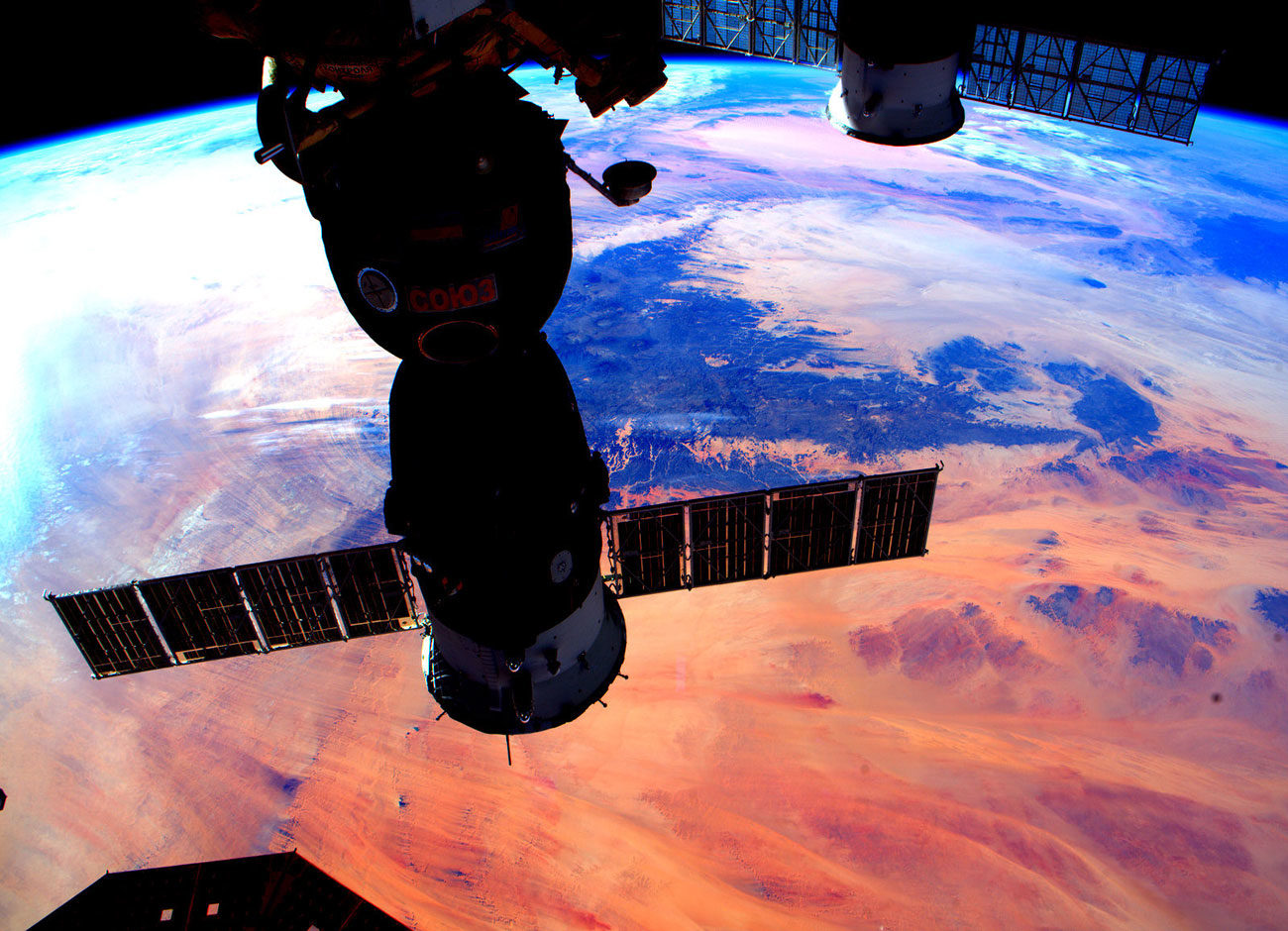 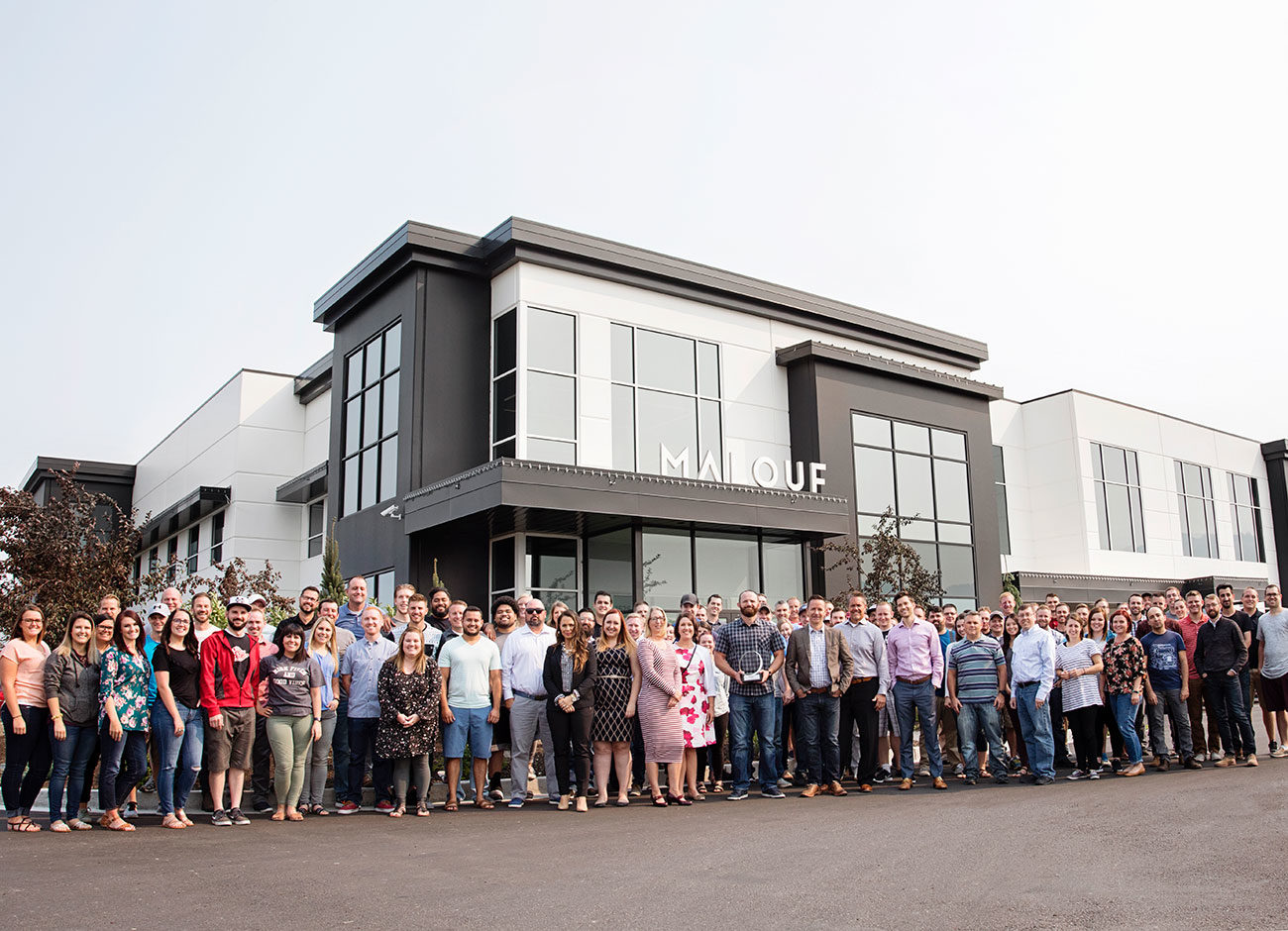