Editing the Course of Health 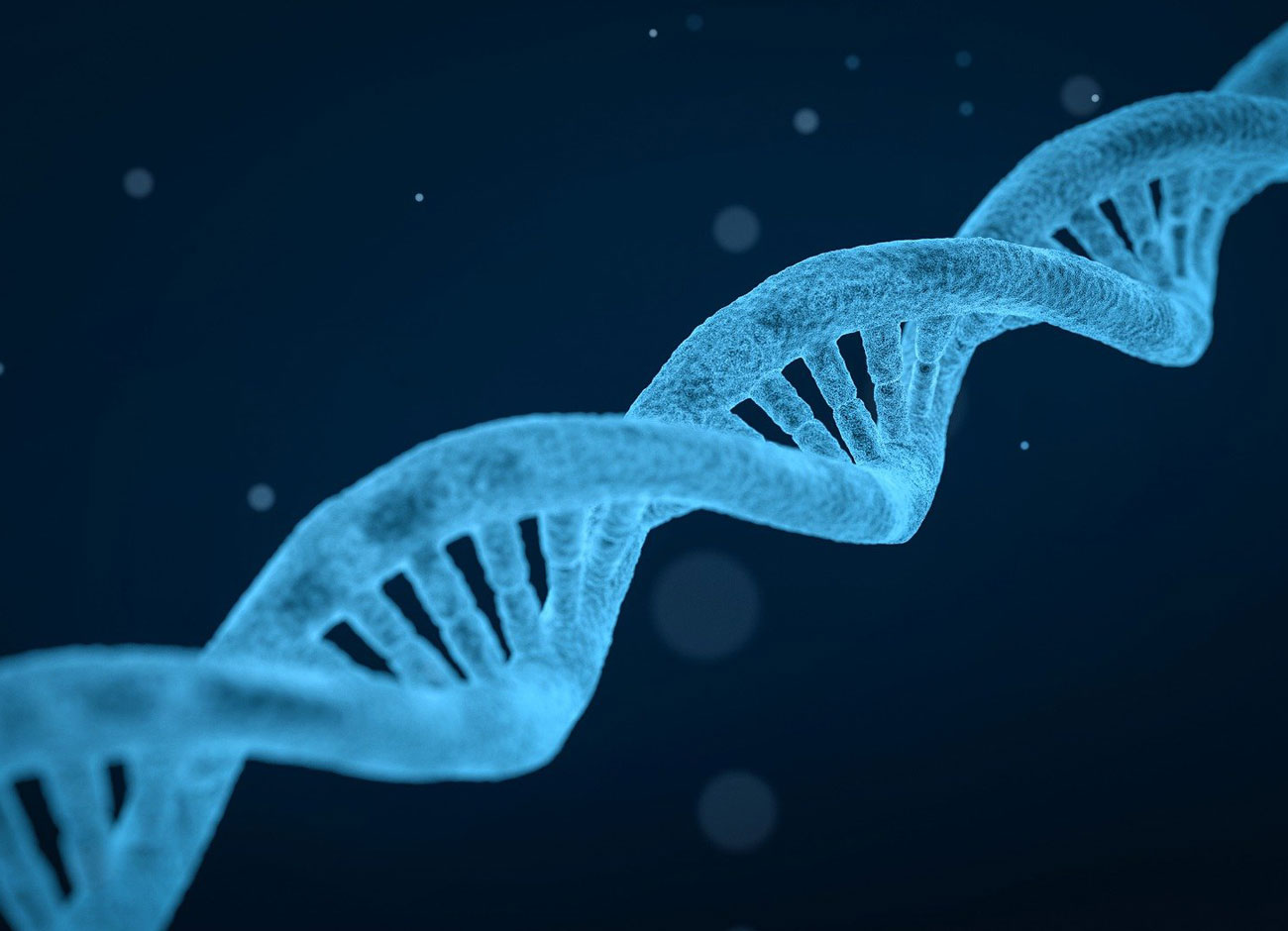 Does the idea of genetic engineering make you feel hopeful about the future or queasy about where it’s headed?

When you hear about genetically modified organisms, does your mind jump to the end of humanity as we know it? Then let’s start smaller with something like a Syrian hamster.

The truth is humans have spent centuries shaping the traits of our foods (and pets) using selective breeding to create sweeter corn, French bulldogs, and the banana we know and love today. We developed new plant strains through cross breeding, exposure to radiation, and introducing bacteria for pesticide resistance.

However, these methods have often lacked a key factor — precision.

“It was more of a guess or a hope,” explains Ryan Jackson, ’05, Ph.D. ’12, assistant professor of biochemistry in his March 2021 Science Unwrapped talk, “A CRISPR Understanding: How Genetic Engineering Will Impact Our Lives Now and in the Future.”

Jackson studies the mechanisms of bacterial immune response against viral infections with a goal of uncovering new gene-editing tools akin to those used in CRISPR-Cas9 systems, a natural self defense method discovered in bacteria in the late 2000s and adapted as an instrument for gene editing. But what exactly is CRISPR, and will it prove as revolutionary as predicted?

In 2019, 34-year-old Victoria Gray became the first patient in the United States to undergo an experimental treatment using CRISPR to treat sickle cell disease, a debilitating condition she had since childhood. The procedure involved removing her blood stem cells to disable the gene and replanting them in her bone marrow. She now lives symptom free.

Will Gray’s experience be scalable to the masses?

For Jackson and Zhongde Wang, a professor of transgenics, molecular biology, and stem cell research at USU, genome editing technologies hold immense power by making tiny tweaks to DNA — if used appropriately. The two professors break down what they see on the horizon.

In 2020, Jennifer Doudna and Emmanuelle Charpentier were awarded the Nobel Prize in chemistry for their work pioneering CRISPR-Cas9 into a gene-editing tool. Why is this technology such a big deal?

Ryan Jackson: CRISPR stands for clusters of Regularly Interspaced Short Palindrome Repeats, which describes a curious pattern observed in the DNA of bacteria — the same sequence of DNA is repeated over and over, but in between the repeats are unique sequences called spacers. Although this pattern was first observed in a lab strain of E. coli in 1987, it wasn’t until 2005 that scientists discovered the unique spacer sequences were identical to parts of virus DNA. This observation led scientists to wonder if CRISPR could be a memory of encounters with viruses that could be used to fight off future infections.

In bacteria, the CRISPR DNA containing the virus sequence is transcribed into an RNA component that combines with a protein called Cas9. The part of the RNA that is identical to the virus sequence binds to virus DNA. Once the virus DNA is bound, the Cas9 protein cut the virus DNA before the virus can damage the cell. Jennifer Doudna and Emmanuel Charpentier were the first to show Cas9 could be reprogrammed with a synthetic RNA to make a precise cut in DNA. CRISPR lowered the barrier for gene editing because it is cheap, easy to use, and it works. You can buy Cas9 to cut genes in cells from asparagus to aardvarks; you just need a little bit of training.

CRISPR-Cas-9 is used because of its precision delivery. What happens when it misses the mark?

RJ: It really depends on the location of the off-target. If the off-target location is in the middle of an essential gene, then the edited cells will die and the organism will still have the disease you are trying to treat. But, for instance, if we accidentally cut a gene that flags the immune system when a cell becomes cancerous, then we could potentially cure you of one genetic disease (e.g. sickle cell disease) but give you another in its place (e.g. leukemia). The biggest fear is that we are editing in places that we don’t know what we are doing and could pass that harm to future generations. That is why scientists have drawn a hard line at not editing the human germ line, and why I am not surprised a tomato is the first commercially available CRISPR product. The risk is low in agriculture. You can just burn the crop when you are done. You can’t do that with human health.

Dr. Wang, your lab developed the world’s first genetically engineered Syrian hamsters using CRISPR to study conditions from hantavirus infection to cystic fibrosis. Why did you decide to modify hamsters instead of mice or rats, the typical stand-ins for human disease models?

Zhongde Wang: Let’s talk about why mice and rats are used a lot — it is not because they are better for models. There are strains that are genetically very pure (inbred), which are good for studying genetic correlations with a phenotype. Other reasons that mice and rats are often used are that genetic engineering techniques were first established in these species and that more experimental reagents are available. Animals like hamsters, guinea pigs, and naked mole rats offer some unique advantages, as well as some disadvantages for human disease modeling. Hamsters show very similar disease progression as humans for pancreatic cancer and many other diseases but were somewhat neglected because there was no way to edit their genome. That was a huge technical block until our lab took up the challenge.

You have more than 30 different genetically modified hamster models for examining the mechanisms for infection from hantavirus to colds in immunosuppressed people. How do you select where to put resources?

ZW: You want to address very significant questions. There are urgent needs for modeling diseases and many models that are not good. I review the literature and talk to scientists to identify what are the urgent needs in human disease modeling with animal models such as hamsters. I also like to collaborate and have been working with many experts in viral infection. And by working with others we don’t have to reinvent everything. For us, we just want to develop the techniques to edit the genome.

These days you are excited about working with naked mole rats. Why?

ZW: Naked mole rats live cancer free, never age, and rarely get sick. Older females reproduce just like the young ones. Behaviorally, a naked mole rat colony in the wild can be a few hundreds of animals, but there is only one queen and other animals form teams by playing specific roles in maintaining the colony. Naked mole rats can tolerate zero oxygen for 18 minutes. Think about stroke and heart attack victims. People say 100 years is long enough to live because you don’t want all the diseases, body pain, and memory loss that can come with age. Naked mole rats are amazing in defying aging, and we can learn a lot from them. I joke that my lab motto is “Live and work like a naked mole rat.”

We’ve talked about some of the risks of gene editing. In the next 30 years, where do you think we will see the greatest improvements because of gene editing?

RJ: I will get a little bold with my predictions. I bet diagnostic tools will be amazing. We will be able to know very quickly what diseases we are facing. I think a lot of genetic diseases will be on the table to be cured and certain cancers will be much less scary. We will be able to target and take them out. If I am being optimistic, genetic engineering gives us tools to face a lot of challenges, like tackling the energy crisis, drought, and climate change. We could be manipulating genomes of plants to help us make fuels. My guess is the future is probably going to be better than anything I can predict.

ZW: Some people have concerns about editing animal genomes for biomedical or agricultural applications, but I would say that gene editing is extremely accurate, and it can solve a lot of problems that can otherwise not be solved. To me, what is amazing is what is possible with tiny changes in the genome. On the agricultural side, mastitis is the most expensive disease in the dairy industry, and it has been established that genetics plays important roles in mastitis-susceptibility. We could do genetic selection to select certain cows that are more resistant to mastitis, but that takes a long time and tends to co-select other undesirable traits, such as low milk production. On the other hand, gene editing is very efficient and precise to bring about the genetic changes in a fraction of time that would otherwise be required by conventional breeding. I think improving mastitis resistance would be helpful not only for animal welfare, but also for the environment because you won’t need as many cattle to produce milk.

Speaking of livestock, Dr. Wang, you are a proponent of using cattle and sheep as bioreactors to generate therapeutic antibodies. Why?

ZW: Production of therapeutic antibodies or recombinant protein by cell culture-based bioreactors is currently too expensive. Not many companies have bioreactors large enough to produce kilos of antibodies, and the cell cultures currently used are prone to bacterial infection. To produce a therapeutic antibody for hundreds of millions of people for something like HIV you have to make a sufficient amount at low cost. Using genetically engineered cattle and sheep, or other large farm animals, can produce better antibodies and in greater quantities.

Some people are concerned that tools like CRISPR could be used in the wrong way. Are our ethics keeping pace with the science?

RJ: I think our knowledge of the mechanisms is outpacing the ethics. But this is kind of how technologies have always been. Some of our greatest advancements in energy and transportation were because of war. I also think we are doing better on this issue than we ever have. As far as I know, everyone is trying to use CRISPR responsibly. The other thing is that nature fights back. Although we have learned a lot, there are selective pressures we haven’t thought of yet, so when people say I bet we can get rid of the mosquito, I bet we can’t. As smart as we think we are, we will probably keep learning.