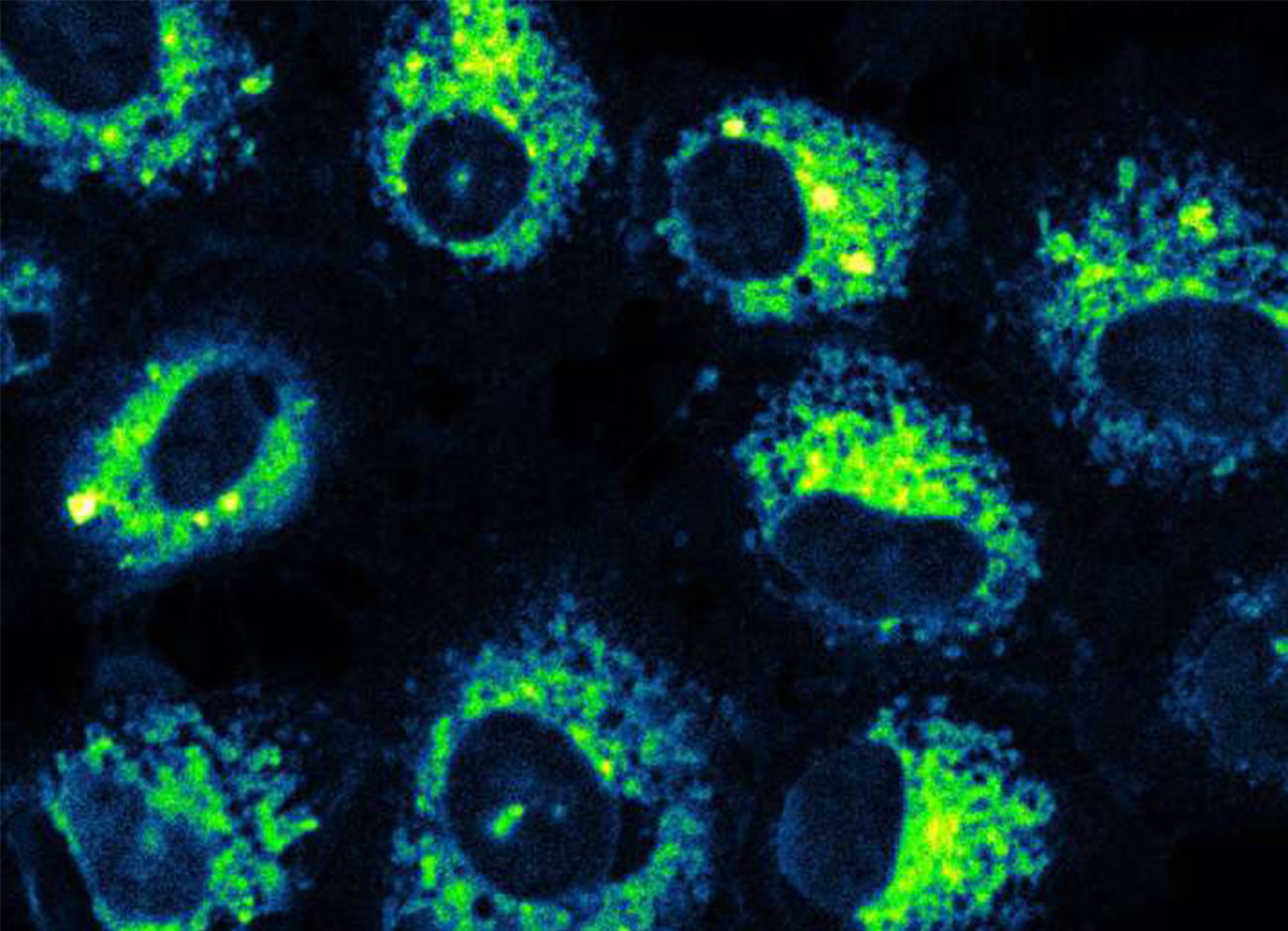 A pivotal discovery in Lisa Berreau’s chemistry lab happened like many scientific advances throughout history—by serendipity.

A few years ago, while her lab was investigating the chemistry of metal flavonate compounds, a student left a sample sitting on a benchtop for a few days and found that it changed after exposure to natural light. Bingo.

We found that light triggered the release of carbon monoxide in the molecule, Berreau says from her office in Old Main. She began wondering about potential applications and called toxicologist Abby Benninghoff with a question: could it kill cells … perhaps, cancer cells?

The idea that carbon monoxide (CO) may hold therapeutic promise has been debated for decades, in part, because the human body already produces trace amounts when hemoglobin breaks down. Berreau flips her laptop around to show a bruise glowing on the screen. The change from purple to green and yellow is a sign of CO release, she says. A little CO can be good, but too much can be deadly—that’s why homes have carbon monoxide detectors installed.

“It’s all about balance,” Benninghoff says.

A number of clinical trials have used low concentrations of CO gas to treat conditions from heart attacks to bacterial infections. Two pharmaceutical companies have devised delivery devices for CO gas. But gases diffuse, meaning the CO exposure isn’t limited to a specific site in the body. Carbon monoxide-releasing molecules, or CORMs, may be a vital workaround, allowing for a more targeted treatment approach in terms of location and dose.

“We need a ‘truck’ to deliver the CO to put it bluntly,” Berreau says. 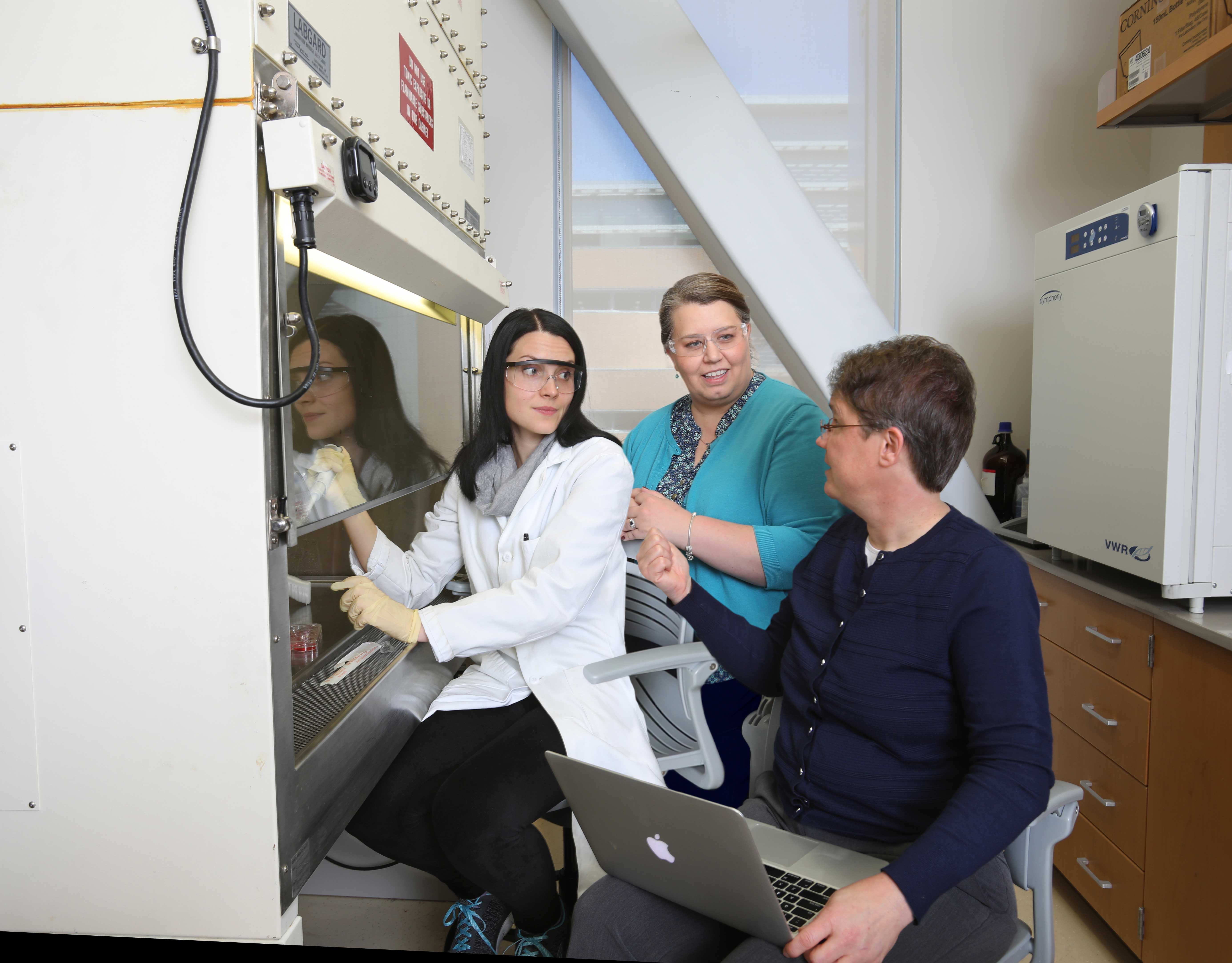 And that’s what separates Benninghoff and Berreau’s molecule. The CORM developed in Berreau’s lab is derived from a flavonoid—an organic compound found in foods such as chocolate and green tea. Benninghoff’s research has long examined the potential health benefits of flavonoids—but using them as a way to deliver CO to combat diseases such as cancer from within cells is a new twist.

Their CORM is a modified flavonoid molecule that is triggered by light. The byproduct that remains following CO release resembles aspirin. Recent studies show their photoCORM to be promising for controlled, targeted delivery of CO to cells, but in a form that biologically makes sense. Some metals and their byproducts could have a toxic effect, Benninghoff says. Flavonoids are found in foods we eat every day. Their CORM can work at concentrations that are nontoxic.

Benninghoff points to a new study that suggests previous tests that relied on metallic molecules for CO delivery may be problematic since the vehicle itself—the CORM’s metallic structure—could be causing the changes in cells, rather than the CO released. If that’s the case, it points to our molecule as a more biologically relevant tool, she says.

Berreau holds a patent on the flavonoid carbon monoxide-release molecule and similar structures—Patent no. 9,840,488—because they are so distinct. By using a flavonoid as a base, there are numerous ways to rebuild it chemically depending on one’s needs. The two scientists search for a metaphor to illustrate the concept. A Mr. Potato Head toy? They settle on a Leatherman—their flavonoid molecule is more like a multi-tool rather than a pocket knife.

Other researchers have already taken notice. One group in China is using their photoCORM in animal models with zebrafish—a step Benninghoff is eager to take.

Benninghoff and Berreau’s work is funded by a three-year grant from the National Institutes of Health, but their collaboration began with a Research Catalyst seed grant from Utah State University’s Office of Graduate Studies which enabled the scientists to gather data and prove proof of concept. Their research involves all levels of students from undergraduates to PhDs, including Marina Popova, who demonstrated targeted CO delivery by the photoCORM into cancer cells; Tatiana Soboleva, an American Health Association fellow; Hector Esquer who examined photoCORM behavior at the mitochondrial level; and Stacey Anderson who created a family of compounds triggered by various wavelengths of light.

The team’s next steps? Investigate additional biological applications for the molecule. This will primarily fall into Benninghoff’s camp, but Berreau will be there every step of the way, tweaking the molecule for the job.

“If we move into a disease model, I think that would be the crowning achievement of this collaboration,” Benninghoff says. “Moving this direction is not for the faint of heart.”