Home / Culture  / This is the Plate

This is the Plate 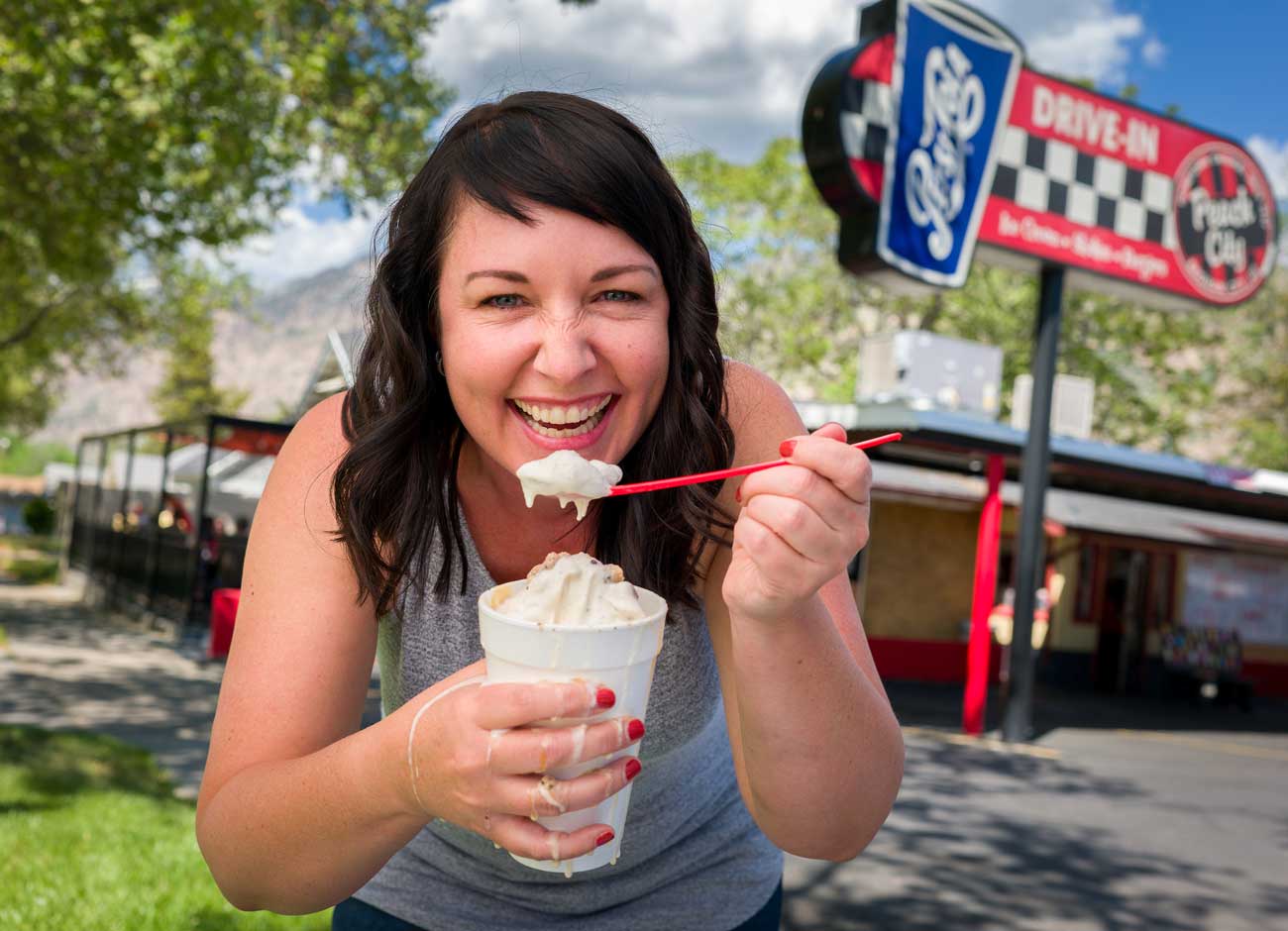 The music. The stories we share. The traditions we celebrate. But what is more everyday than breakfast, lunch, and dinner?

For Eric Eliason, a folklorist at Brigham Young University, Utah’s food culture needed to be addressed.

“To me, this was like the biggest untouched thing — I knew there was a book in it,” he says.

It’s okay to ask. Does Utah have a food culture?

“We were prepared for that question,” Eliason laughs.

Most Utahns are familiar with the state’s predilection for fry sauce, funeral potatoes, and Jell-O. In pre-pandemic times, Utahns visiting Senator Mike Lee’s office in Washington D.C. could enjoy a cup of “the state’s official snack” with him. But is there more?

“When you think about food in Utah, you do not think amazing, high cuisine, and that is unfortunate,” says Lynne McNeill, M.A. ’02, associate professor of folklore at Utah State University. “Utah has absolutely incredible, diverse, unique regional foodways. There is so much there and so much to talk about.”

At its inception, the DNA of the project was to span the state’s demographics and cultures, Eliason says. “This is not the Mormon foodways book; this is the Utah foodways book.”

There is, of course, a section devoted to the influence of Latter-day Saints that covers Mormon food storage practices and ice cream and Postum.

Eliason pitched the idea over lunch at the Black Sheep Café in Provo during a meeting of the Folklore Society of Utah to McNeill and Carol Edison, the former state folklorist. Between bites of modern Navajo cuisine, the three agreed it would be a very tasty endeavor. Contributors—and there are many—span folklorists and graduate students to journalists and restaurant owners. Opening it up to interested community members was intentional, Eliason says. “Make it a feature rather than a bug.”

The book evolved from a collection of academic essays on classic Utah foodways to a book with recipes, personal essays, and scholarly analysis on Utah traditional foods. It took years to compile This is the Plate: Utah Food Traditions (University of Utah Press, 2020).

“Every time we talked to people about it, they would be like ‘well, you’re including Green River melons, right? And San Pete turkey is in there, right? Bear Lake raspberries?’ We were trying to keep up,” McNeill says. “We opened up the door to the true representation of Utah, and I think, all of us were blown away by what we found.”

The trio of editors—a native Utahn raised in the Church of Jesus Christ of Latter-day Saints who has since left the faith, an active LDS member from outside Utah, and a gentile transplant — agreed that everything would be on the table, including alcohol, when discussing the state’s iconic foods. The pioneers produced beer and wine for personal consumption and Brigham Young ran saloons in Salt Lake City. In 1872, Mark Twain wrote about drinking whisky in Utah called Valley Tan, which he described as “fire and brimstone.” Had Utah taken a different path, we could have been a leader in home brew, McNeill says.

Something else shaped Utah’s cuisine instead: sugar.

“If there is a defining feature of Utah food, it is usually sugar,” she says. “In Utah, uniquely, sugar became the food product through which adulthood rites of passage could be expressed with the lack of caffeine and alcohol in the predominant culture.”

And it has affected the palate of the state, she says. “One of my first culinary surprises was chicken salad made with marshmallow fluff in addition to mayonnaise.”

McNeill grew up in one of the country’s foodie meccas. Her dad owned a French restaurant in the financial district of San Francisco. She grew up eating California cuisine and vacationing in Napa Valley. When she came to Utah State for graduate school, McNeill was “ready to be really disappointed in Utah,” she admits. “And I think early on I probably was.”

But feeling at home can take a while. Planting a garden can help.

In This is the Plate, the chapter “Gardening as placemaking in Utah communities” by folklorist Danille Elise Christensen speaks to the waves of new arrivals to Utah and the ways they kept their heritage alive through food. The pioneers wasted little time getting seeds into the ground.

“Peach pits and apple seeds were planted almost as soon as Latter-day Saint companies unhitched their wagons, and Utah fruit has generated glowing reviews, fond remembrances, and economic profit for decades since,” she writes.

And when Greek, Italian, Japanese, and Chinese immigrants came to the Beehive state to build the railroad and work in the mines in the late 1800s, early 1900s, they planted gardens, too. Some Italians grew herbs like oregano and fig trees that they lovingly brought inside during Utah winters. Japanese farmers that settled in the ’20s brought their expertise growing cabbage and cauliflower. Decades later, Japanese Americans sent to the Topaz Internment Camp during World War II resisted conditions and meager rations by planting both ornamentals and tastes of home such as eggplant, cantaloupes, cucumbers, and tomatoes on the grounds.

Displacement is echoed elsewhere in This is the Plate, too. Before Utah was Utah, portions were part of Mexico. And indigenous tribes, many of whom were hunters and gatherers, were forced from their homelands as newcomers arrived. As the landscape changed, their access to traditional foods such as pine nuts, blue camas root, and bison, changed too.

But the myriad foodways across Utah do cross, sometimes in unexpected ways. While Eliason explored why a scone is not a traditional scone in Utah, but rather something fried and more akin to a sopapilla or Navajo fry bread than one plated during English teatime, he wondered if they may have more in common than not. While Navajo fry bread is “bittersweet” because it was developed with ingredients given to them on a forced removal from their homes, he says, perhaps Utah scones and Navajo fry bread are the result of a “much more shared circumstance.”

“In a shared hardscrabble frontier environment, with nothing but a campfire, a skillet, and a limited set of long-lasting portable staples like wheat flour, lard, yeast, and sugar, what else can be done?” he writes.

Eliason suspects food may be the one thing that unites Utahns.

“With common historical touchstones in short supply and many cultural and social mores as dividers rather than unifiers, food is emerging as our common ground,” he writes. “It doesn’t matter whether you are ultra-, jack-, non-, or even anti-Mormon. By eating fry sauce and Jell-O … you can participate in Utah’s shared identity.”

McNeill reckons this is true. Like those who came to Utah before her, she eventually felt at home. Planting her first garden aided the transition. So did developing a preference for a certain funeral potato recipe.

“I firmly believe it has to have buttered cornflakes on top,” she says.

And that is the larger point.

“You don’t have to make funeral potatoes and call them funeral potatoes and bring them to LDS funerals to have a sense of belonging,” McNeill explains. “You have a relationship with a chip, crumble topped baked potato dish that you understand in relation to the region that you live in. It’s a real, beautiful, nuanced sense of identity and belonging that comes from knowing the regional foodways of a place. … It’s not loving fry sauce that makes you a Utahn, it’s having an opinion on fry sauce that makes you a Utahn. It’s knowing what funeral potatoes are, whether you eat them or not.”

Utah food culture may also be coming full circle, too.

As eating locally-produced foods and growing one’s own food has become more popular, many Utahns new to emergency preparedness or locavore eating are finding “that their grandmothers never quit doing it,” Eliason says.

He pauses to ask a question of his own. “Are you even allowed to talk to me, a BYU professor?”

Which only proves his thesis — we can all come together over food.

Sheepherding has been important to the Navajo for centuries as the meat was consumed for nourishment and the wool was used for weaving. Mutton stew remains a staple dish served at community gatherings.

Recipe excerpted from This is the Plate: Utah Food Traditions edited by Carol A. Edison, Eric A. Eliason, and Lynne S. McNeill. Reprinted courtesy of University of Utah Press.