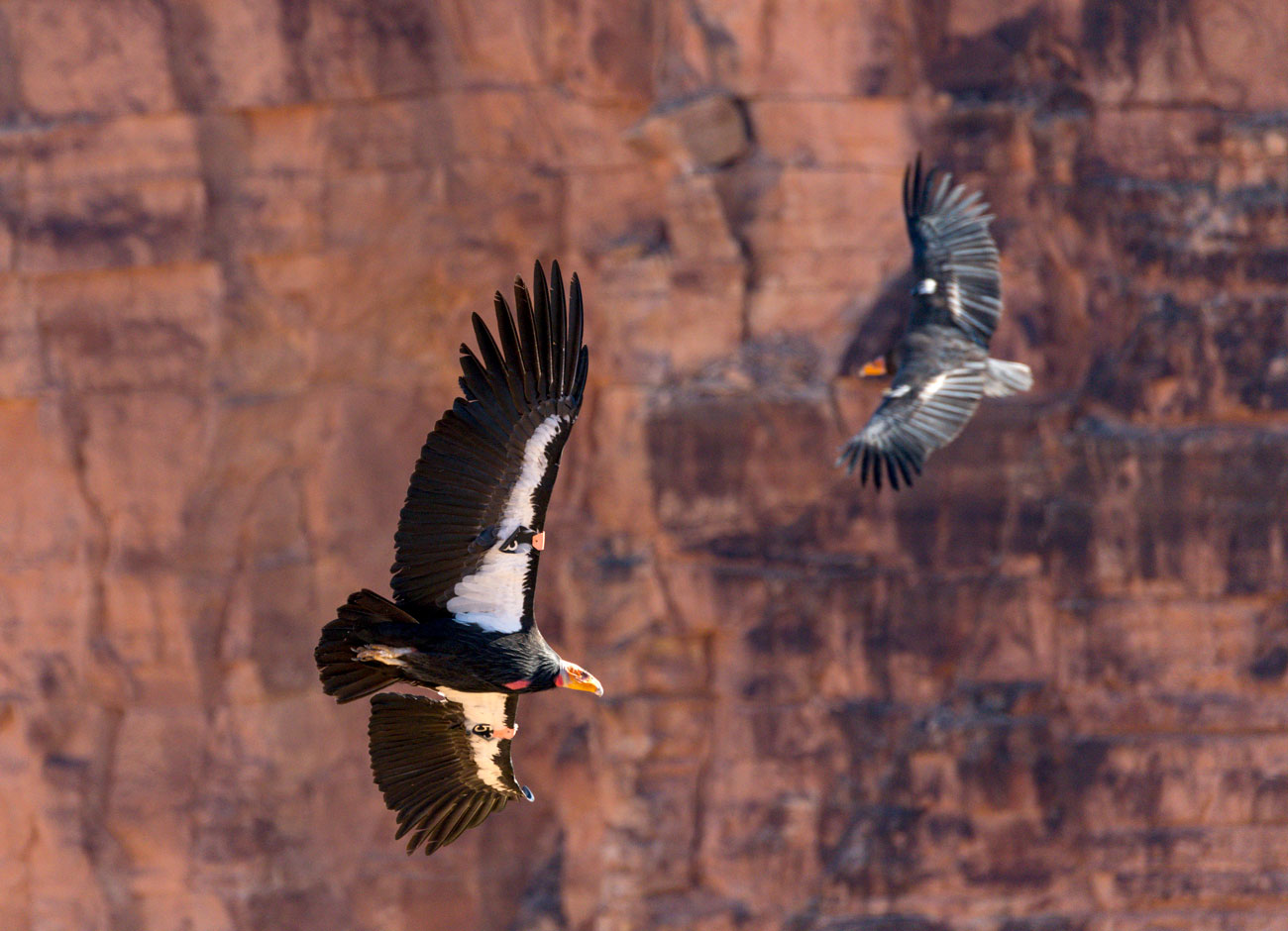 California condors have plenty of challenges working against their survival, from predators to electrocution.

But the thing actually driving the species to the brink of extinction is completely avoidable — lead poisoning from ingested ammunition. From a critical low of 22 birds in 1987, a captive breeding program pushed forward recovery to approximately 500 living birds. More than half fly free, and many condors call southern Utah home. But none in the wild are safe from lead poisoning.

“Since first being reintroduced to the southern Utah area in 1996, 54% of condor deaths have been confirmed as caused by lead poisoning from lead ammunition,” says Jake Richards, a master’s student in Utah State University’s Department of Environment and Society. “This number is probably higher, but the remote locations of the condor’s nesting and foraging range makes it impossible to recover and diagnose every death.”

For people lucky enough to see a California condor in flight, it’s a spectacular sight. One of the largest flying birds in North America, the condor’s wingspan stretches nearly 10 feet, and the bird can reach speeds up to 50 miles per hour. They can travel up to 200 miles per day searching for carrion. Lead-tainted meat becomes part of a condor’s food supply when soft lead-core bullets shatter into hundreds of pieces upon impact. Even bullets designed to limit fragmentation, such as jacketed bullets, leave a significant amount of lead in carcasses. If a wounded elk escapes a hunt, if gut-piles are left on the landscape after a kill, or when a pest animal (like a coyote) is shot and abandoned, the condor faces accumulating danger from the lead it ingests. Dozens of birds have perished from lead poisoning since reintroduction to the wild.

That’s why a team at USU is working to convince hunters to voluntarily abandon lead-based ammunition when hunting in condor territory. Richards, a hunter himself, knows he has to craft his message with care.

“Many hunters have a deep sense of place about the lands they use,” he says, “and many consider themselves stewards of that place.” But some hunters can be sensitive about having an authority figure dictate the choices they should make, and how they should hunt, especially when the message comes from a government source, he says. Even some information campaigns, launched with best intentions, can backfire if they don’t take this sensitivity into consideration.

Richards and a team from the Institute of Outdoor Recreation and Tourism (IORT) are partnering with Utah Division of Wildlife Resources (UDWR) to develop a strategic communication program to increase use of non-lead ammunition among hunters in the condor range of Utah. Richards and Jordan Smith, director of IORT, are collecting survey data from Utah hunters to determine what drives ammunition choices in condor habitat, among other things.

Although survey analysis will occur over the winter, Richards’ gut tells him the answer to the right kind of communication may be in a hunter’s sense of moral integrity — or, as sociologists call it, personal norms. Much of the current messaging used to change social behavior employs a strategy of outside pressure to get results: “Experts say …” or “The rules are …” And in many cases, this approach works. But messaging targeted to Utah hunters may need tailoring to be more effective. Personal norms are about an individual’s feelings of right and wrong, rather than reacting to external pressures and expectations, Richards explains, which might be a good fit for this particular audience.

For instance, consider these two messages:

A good approach to public messages about swapping out lead ammunition could help a person feel empowered to act and convince them to actually make a change. The wrong message just ticks people off, or even worse, entrenches them in their current behavior and beliefs, says Richards.

Communication strategy is an important ingredient in a complex recipe, but it isn’t the only one. UDWR also uses incentive programs to encourage hunters to voluntarily adopt non-lead ammunition when hunting big game in the condor range. In 2011, they launched a voluntary non-lead ammunition program. Then, with the help of The Peregrine Fund, the program expanded substantially in 2013. Big game hunters in California condor habitat can receive coupons for free non-lead ammunition. If they use it — or opt to pack out gut piles — they are eligible to enter a drawing for one of five hunting rifles.

The survey project is also identifying the best communication outlets to reach hunters and establish information about what hunters currently know, and what opinions they hold about California condors. Post-hunt surveys show that approximately 60% of Utah hunters used non-lead ammunition in the condor range in 2016. The goal of the UDWR and USU’s researchers is to increase this to 85%.

The old adage ‘all publicity is good publicity’ may fall short in this case. Simply informing hunters about the issue, or telling them what the ‘experts’ think they should be doing, may not have the hoped-for results. Communication strategies developed without science-based information are limited in their success in changing people’s behavior. But a communication campaign based on a sociological and psychological understanding of how people choose to act, and tailored to the audience, may have a better chance at keeping California condors a little further from the edge of extinction, Richards says.

Additional background information on California Condors and the recovery effort in Utah and the southwestern U.S. can be found here. For upcoming results on the Utah hunter survey, visit the IORT website.