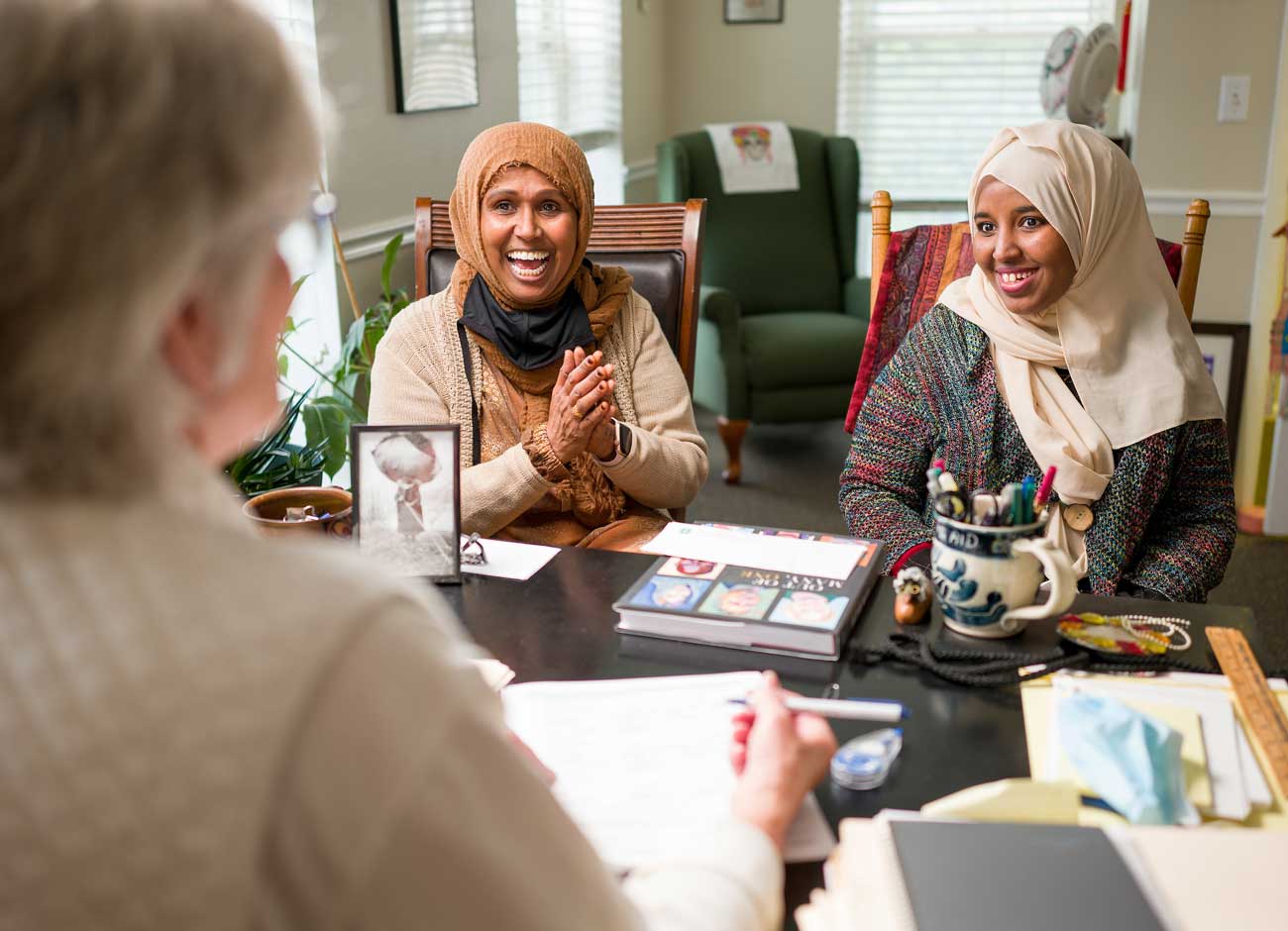 In the early days of the Cache Refugee and Immigrant Connection (CRIC), Nelda Ault-Dyslin ‘05 and the other founding members of the nonprofit organization lacked a permanent, physical space in which to meet to help people new to the United States. They alternated gathering at different locations around Cache Valley, including the Logan Library, Neighbor Housing Solutions, and the First Presbyterian Church.

Printing off documents was problematic and relatively costly, leading one CRIC volunteer to purchase a printer. But it still needed to be taken from location to location, prompting Ault-Dyslin’s father to make her a small cart to haul supplies more easily. A small photograph on the CRIC website captures Ault-Dyslin, with a pack hanging off her back, as she pulls her homemade cart down a walkway, looking every bit like someone in need of a home.

The irony is a little bit stunning.

For several years, the determined CRIC volunteers were not all that unlike the people they were helping navigate the intricacies of life as a “new American.”

“We were envisioning being in a building where I didn’t always have to carry this printer with me, and we would have people’s information in one spot and not in my car,” Ault-Dyslin recalls with a smile. “We were always looking at wonderful models of other organizations that had offices and employees and thinking, ‘We’ll get there someday.’”

“Someday” is here for CRIC, which has had its own office space for the past four years, and employs six staff members, and two members of the AmeriCorps VISTA program. Officially founded in 2014, CRIC benefits from the efforts of a steadfast group of unpaid volunteers, about a dozen of which make up their board of trustees.

“CRIC is like the little engine that could – and does – move forward,” says board president Randy Williams ’85, MS ‘93. “And it moves forward because of the incredible new American community, and an amazing group of people … who are dedicated to the community that we serve.

“It really is a story of success.”

A renowned folklorist at Utah State University from 1993 to 2019, Williams is just one of many connections between CRIC and USU staff, faculty, alumni, and students.

“USU has been very good to CRIC … and we’re very grateful for the support,” says Danny Beus ’11, CRIC’s new executive director. His mother is an immigrant from Chile so he understands the importance of feeling like you belong in a new country.

After graduating from Utah State with a degree in American studies, Ault-Dyslin spent three years at Western Kentucky University completing a master’s degree in folklore and working with Burmese refugees. A native of Logan, she returned home and found that while she was gone, many refugees who originally left Burma for Salt Lake City had made their way to Cache Valley in search of employment, the majority of them at the JBS Beef plant in Hyrum.

“It was just one of those things where I returned home knowing that I needed to come back to the West,” Ault-Dyslin says. “And then I come to find out, ‘Oh, the group of people whom I wished to work with was actually here.’”

She soon secured a position at the Utah Department of Workforce Services in Logan where she was directly involved with helping immigrants and refugees find work. But when her own job was defunded, Ault-Dyslin spent a year with AmeriCorps before finding a permanent position at USU’s Val R. Christensen Service Center where she helps run the campus food pantry.

Along the way, Ault-Dyslin spearheaded the creation of CRIC, which started as a gathering of local people interested in helping newcomers adjust to life in a new country. While Salt Lake City is an official resettlement community, Cache County falls outside of the radius of services provided by agencies in Utah’s capital city.

“Early on, one of the board members came up with this little idea that CRIC is a ‘gap-filler,’” Ault-Dyslin explains, adding that when they identify gaps between a refugee family and service organization, they educate the organization about how to work with the community. “And if that can’t happen, then CRIC will create something to fill that gap, which is how we ended up with many of the programs we offer like driver’s license and citizenship classes.”

While the COIVD-19 pandemic made offering services more challenging in 2020-21, CRIC normally offers walk-in hours at its office where volunteers assist new Americans – a term that encompasses both refugees and immigrants – with paying bills, filling out applications and other tasks that can be challenging to individuals who may not speak the language or be familiar with systems in the United States such as healthcare or education.

CRIC also helps new Americans prepare for the written test for a Utah driver’s license, as well as for the U.S. naturalization test. The group also oversee the use of a community garden in Logan and foster friendships with local families through its Neighbor Program.

“CRIC is about being a trusted resource to folks who are either refugees or immigrants or otherwise new to the country,” Ault-Dyslin explains. “And we work really closely with other local service providers to connect people to the things that they need.”

The list of countries from which CRIC has helped refugees and immigrants is long, including African nations like Eritrea, Somalia, Ethiopia, and Sudan, southeastern Asia counties such as Burma, Thailand, and the Philippines, Mexico, Guatemala, Haiti, Syria and Iraq. And while the organization doesn’t have paid translators, there are CRIC staff members and volunteers who speak Spanish, Tagalog, and Tigrinya.

Williams, a lifelong Democrat, says she was “never prouder” than when former Governor Gary Herbert, a Republican who wrote a letter to President Trump in October 2019 asking that more refugees be sent to Utah.

“We know that statistically, new Americans come, and they get in the workforce and pay taxes and are innovators and high-functioning adults, they’re just functioning in a new environment and need some culture competency in the world they find themselves in,” she says. “It’s a very two-way street of offering.”

We know that statistically, new Americans come, and they get in the workforce and pay taxes and are innovators and high-functioning adults, they’re just functioning in a new environment and need some culture competency in the world they find themselves in.” – Randy Williams

While it’s difficult to put an exact number on how many new Americans live in Cache Valley, Jess Lucero, whom Williams replaced as board president in July, notes that Utah has welcomed about 60,000 refugees since CRIC was started, and that CRIC currently has more than 300 client files for individuals and families.

“Sometimes refugees don’t even know that we exist, and so it’s about word of mouth and getting awareness out to the refugee communities that we exist,” says Lucero, an assistant professor of social work at USU.

Cache Valley became more of aware of CRIC during the summer of 2020 when COVID-19 hit the JBS meat packing plant extremely hard. Lucero says an estimated 900 out of 1,400 workers there come from Latino, refugee, and immigrant communities, including 90 percent of CRIC clients.

“Almost every one of our household was impacted very directly by COVID,” she says. “It was a wild time, but it was also really fantastic because so many community partners came together to help, and I think we have stronger connections now as a result of that crisis.”

Working in conjunction with St. Thomas Aquinas Catholic Church, the Church of God in Hyrum, and the Church of Jesus Christ of Latter-day Saints, CRIC provided food, funds, housing assistance, and other supplies like diapers and medicine for households in need, making it possible for workers and their families to quarantine and limit the impact of the outbreak. For their efforts, the groups and individuals who led the relief effort were honored with USU’s Community Diversity Award in May.

CRIC’s motto is “Community for everyone” and in Ault-Dyslin’s eyes, the nonprofit organization is “slowly getting there.” But considering where CRIC started, its growth is remarkable and something that Beus certainly noted when taking over as the new executive director earlier this year.

“Our goal is to really expand the services that we provide the immigrant and refugee community here in Cache Valley,” he says. “But honestly, my biggest concern – and I tell Jess and Nelda this a lot – I just don’t want to screw this up.”

“With very little and while working full-time jobs, the board has been able to do so much to bless the lives of immigrants and refugees here in Cache Valley. I just hope that I can continue doing the work that they have done, and then expand on that work.”