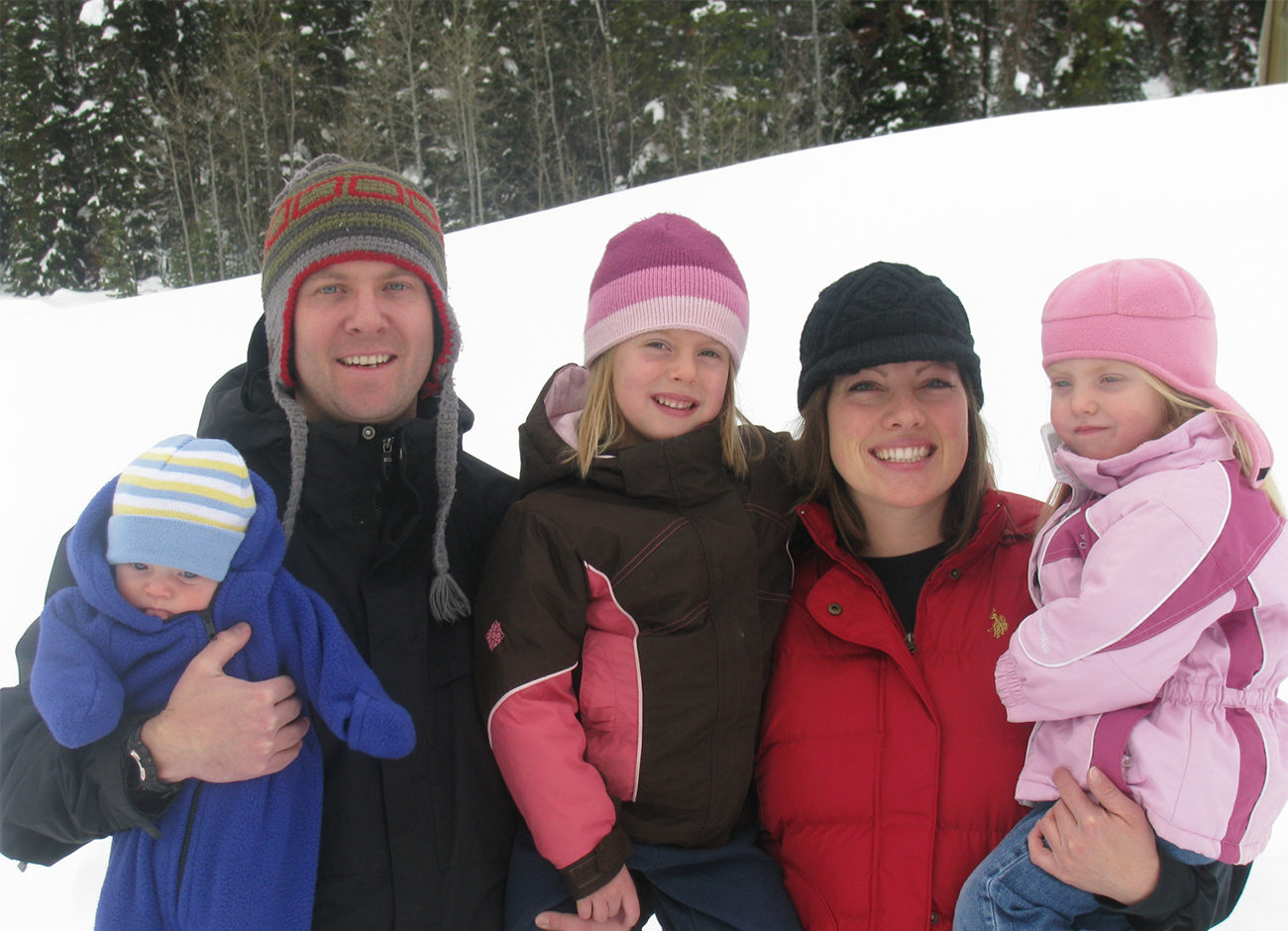 Christmas Eve 2010 was a beautiful bright day at the Hogadon ski resort in Wyoming. Kelli Johnson ’03 was taking her oldest daughter Elise to ski down a run, as the whole family spent the day enjoying the sport they love; her husband, Chauncy ’05, was with their two youngest children. Kelli has no memory of the instant that changed her family’s life forever.

“I only remember that I stopped to help Elise get her ski back on,” she said. “I never saw the snowboarder coming.”

Speeding at 50 mph, an out-of-control snowboarder collided with Kelli and her daughter. Both 5-year-old Elise and the snowboarder were immediately killed by the impact.

The force of the contact threw Kelli, and her head collided with the snowpack, causing a fractured vertebra as well as a severe traumatic brain injury. When she awoke from a coma several weeks later at Craig Hospital in Denver, Kelli learned that she had missed the funeral and burial of her firstborn child.

The staff at Craig Hospital helped Chauncy plan when to tell Kelli this tragic news. “I only told her when she was able to hold things in her memory,” he said. “I didn’t want to have to tell her all over again.”

Kelli experienced a setback in her physical recovery after learning of her daughter’s death; it was difficult to cope with a disorienting emotional trauma on top of her physical injuries. The impact of the accident on Kelli’s brain left her with cognitive difficulties. Nerve roots that controlled her right arm were severely stretched. As a result, there was no movement in this arm for an entire year. Her hand was working, but her arm was paralyzed. 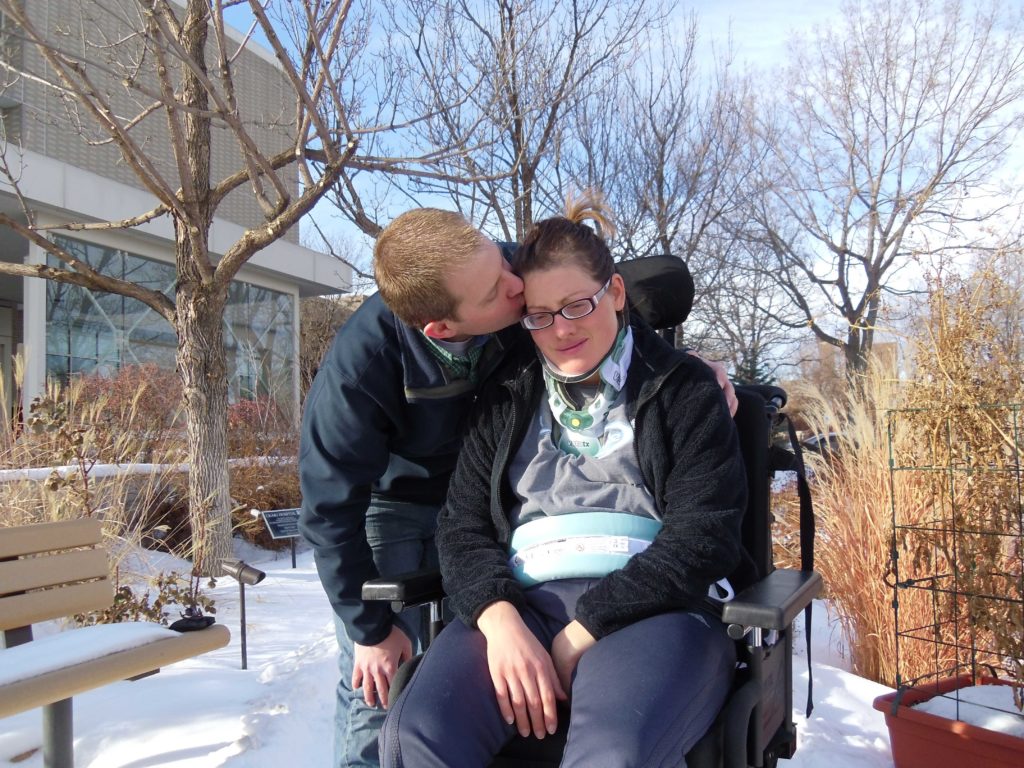 Kelli spent months recovering from the accident with the help of staff at Craig Hospital in Denver. Photo courtesy of the Johnson family.

From speech therapists to neuropsychologists, the Craig Hospital team helped restore Kelli’s health while teaching her how to live with her injuries. Over time, Kelli made astonishing improvements—her speech, walking, and cognitive functions are all now recovered, and she has even gained an increase in the mobility of her right arm.

Back in 2003, Kelli earned a bachelor’s degree in exercise science from the Emma Eccles Jones College of Education and Human Services at Utah State University. During her recovery, Kelli relied heavily on what she had learned in those classes. “I loved Andy Anderson’s anatomy and physiology classes,” she said. “When I heard doctors saying things like ‘myelin sheath’ and ‘brachial plexus,’ those terms weren’t foreign to me, and that was very comforting.” Kelli understood how nerves stem from the spinal cord, how the brain operates to control everything, and how the nervous system works.

“Even in my state of brain injury, I could understand more of what was happening to me because of my classes,” she said. “My knowledge about nerve issues helped me figure out how to best recover my arm—and my exercise and fitness classes were something I could fall back on as I learned to walk and dress and brush my teeth.”

Anderson was thrilled to hear that Kelli’s education aided in her recovery. “I can’t help but think that having that knowledge about your body helps make you more of a participant in your own therapy and your own recovery,” he said.

After graduating, Kelli got a job as a physical education teacher, working at a local elementary school throughout Chauncy’s senior year at USU. He graduated with a dual degree in Spanish and political science in 2005—the year Elise was born in Logan.

“Elise was full of life and energy,” Chauncy said. “She was brave, and she knew what she wanted, but she was also kind and soft-hearted and aware of how she made people feel.” Kelli recalls how much Elise loved skiing, soccer, and riding her bike. “Even though she was so young, she picked up athletic things very quickly. It’s almost like there was part of her that knew she had to hurry and get it all in.”

Now, to honor Elise, the Johnsons have created a powerful safety campaign in her memory. They partnered with the National Ski Areas Association (NSAA) to launch the #RideAnotherDay campaign, which includes video, posters, and social media. The safety campaign offers proactive tools that are easy to understand: Be Ready, Stay Alert, Plan Ahead.

“This campaign includes tangible actions,” said Earl Saline, director of education programming at the NSAA, “The Johnsons wanted a message that would draw people in, rather than pushing them away. They still love this sport, and they still ski as a family.”

Kelli and Chauncy are open about the anxiety they encounter on the slopes. “I spend a lot of time talking myself through the fear of getting injured again,” said Kelli. “Of course it’s scary for us to take our kids skiing, but we don’t want them to grow up in fear of things that carry some risk,” said Chauncy. “Nothing replaces the exhilaration of skiing and snowboarding, so it’s important not to impose our fears on them.”

Kelli and Chauncy travel frequently to various ski areas to teach employees the importance of managing guests’ behavior. “The presentation we give has an impactful message; the room is always very emotional and very positive,” said Chauncy. “We get lots of hugs afterwards, and employees say they will be more aware of skiers’ behaviors, rather than letting people pass by who are doing things they shouldn’t.”

“Hearing people say that they will be safer skiers and riders has been a beautiful outcome,” said Kelli. “It really helps provoke change in individuals. This hits people’s hearts, and they want to share the message with their family and their friends.” The Johnsons’ ultimate vision is to impact the ski culture as a whole, and they hope the ripple effects will go far beyond this particular industry.

Craig Hospital paid a touching tribute to Kelli in 2017 with its prestigious Inspiration Award, which honors an individual whose accomplishments after a traumatic brain injury give inspiration to others. Kelli’s recovery has been extraordinary, and the award recognizes the work she and Chauncy are doing to prevent such accidents from happening to others. Staff members at the hospital reach out to Kelli and Chauncy when other families in similar circumstances are admitted to their facility. The Johnsons have been a lifeline of support, encouragement, and love for many people during the most difficult moments of their lives.

“There is immense healing in doing this,” said Chauncy. “We don’t always have answers for why things happen—but we have choices in how we move forward.”

To learn more about the Ride Another Day campaign, go to www.nsaa.org/safety-programs/collisions.