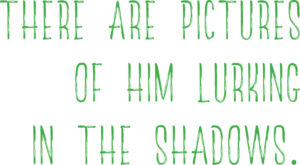 He likes to be where the children are. He also fancies forests. He is tall and lean. He wears a black suit with a red tie, sometimes a black one. His face has no features and his spindly arms can sprout tentacles.

You may have heard about him from a friend or from your kids. Or maybe you vaguely recall the disturbing story of two 12-year-old girls from Wisconsin in 2014 who took their friend into the woods and stabbed her 19 times because Slender Man wanted them to.

The victim miraculously survived. Her two friends, now in their mid-teens, remain incarcerated. And Slender Man? Who knows where he is right now, but Lynne McNeill, faculty advisor in the Utah State University folklore program, is sure he is coming.

She has never met him, but she knows enough to write a book about him, along with Trevor Blank, assistant professor of English and Communication at State University of New York, Potsdam. He was also featured in the HBO documentary, “Beware the Slenderman.” Together they are co-editors of a compilation of stories just released by USU Press called Slender Man Is Coming: Creepypasta and Contemporary Legends on the Internet.

Folklore is as old as humanity, and so is Slender Man―at least the mythos surrounding him. But make no mistake about it, this Big Bad Wolf wears a corporate cloth that may oddly comfort some while bringing terror to others. Like any good contemporary legend, he reflects the time in which he lives, and just like any relevant academic program, so does USU’s folklore program.

Today both have an inseparable connection to the internet. For Slender Man, it is where he was born. For USU’s folklore program, it is where it is being re-born, distinguishing itself worldwide for its digital archives and folklore internet studies.

Slender Man can be traced to 2009 when someone posted a prompt on “somethingawful.com” challenging users to create a paranormal image. Victor Surge took the challenge and created the slender, scary fellow by photo-shopping him into two black and white images in which he is lingering in the background. One in the shadows behind dour-faced children who are walking toward the camera and another one of him at a children’s playground lurking in the distance with tentacles for arms while kids are happily playing on a teeter-totter and slippery slide.

One of “The Slender Family” images by Ina Cecilie Haveland.

The images were creepy enough to stick and soon became an internet sensation, especially among young people. A phenomenon that took that very dark turn in Wisconsin.

What made Slender Man so successful was the way the images targeted key elements of legend genre. Just enough specificity to really seem plausible and just enough weirdness to leave you scratching your head, and saying, wait…what? McNeill says.

The initial images were obviously fictional but they left that context as they flew around the internet, and even off the internet.

“People immediately began developing the character that Victor Surge created in those images,” she says. “Creating backstories, fairytales, fake German woodcuts from the 17th century―filling in this backstory for the slender man character.”

Slender Man demonstrated the power of the internet as a new medium for folklore distribution. Surprisingly, many folklorists were slow on the take. The USU folklore department, however, saw an opportunity beginning four years ago and quickly seized upon it through the Digital Folklore Project, co-directed by USU English professor Jeannie Thomas. Its academic housing lends gravitas to the budding “Digital Trend of the Year” recognition that the department hands out annually to hashtag-worthy movements―the Emmys of the digital trending world. All contributions are housed in USU’s Special Collections and Archives where the American Folklore Society Manuscript Collection resides, forming one of the largest repositories of American folklore in the United States, McNeill says.

“Folklore may be small here but it’s one of this university’s internationally recognized programs,” McNeill says. “Scholars overseas come here to work in our archive, come here to be part of Fife workshops. It is something we haven’t lost; it just went low-key for a while.”

This year’s Fife workshop spent the week discussing the intricacies of Slender Man, how he taps into today’s corporate and government surveillance culture. The luring and somewhat comforting authority figure he poses in children’s lives and his comparison to the Pied Piper of old. The advent of copy and paste stories that blended into copypasta that then became creepypasta with the likes of Slender Man.

The internet is the world’s largest folklore archive today, and yet it is self-archiving in the same way a landfill is self-archiving. It is all there but hard to dig through and make sense of. That is where the folklorists come in. They are the ones sifting, categorizing and archiving, McNeill says.

And USU’s folklore archivists are the ones spotting the Slender Mans out there. The ones asking what they mean, what they dramatize and convey for the people who forward them. Sometimes it’s for simple entertainment, but other times for articulating deeply nuanced cultural threads that can’t be communicated pragmatically through normal everyday conversations. “So there’s so much stuff to sink our teeth into there,” she says.

And they are a ravenous bunch, these folklorists. Perfect, really, for any dinner party, because what’s more entertaining than talking about how the blankness of Slender Man’s face allows people to fill it in with their own worst nightmares? And how sharing a meal can be considered a ritual, and how rituals communicate intense feelings of social togetherness and define a greater identity.

And before you know it, off they go to the local haunted statuary, these pied-Fifers, as they do every year, to form a circle hand in hand and walk around the Weeping Woman while chanting 13 times, “Weep woman, weep.”

It’s a trip, a legend trip, they will tell you. Physically acting out a legend’s thesis to test if it is real or not. For two young girls in Wisconsin, it took a deadly turn, but for most people, especially the young, it is typically about building relationships, negotiating the boundaries of evil and bravery―all part of growing up. And for those already grown, maybe a way to help keep them young.