Home / Culture  / A Desire To Serve

A Desire To Serve 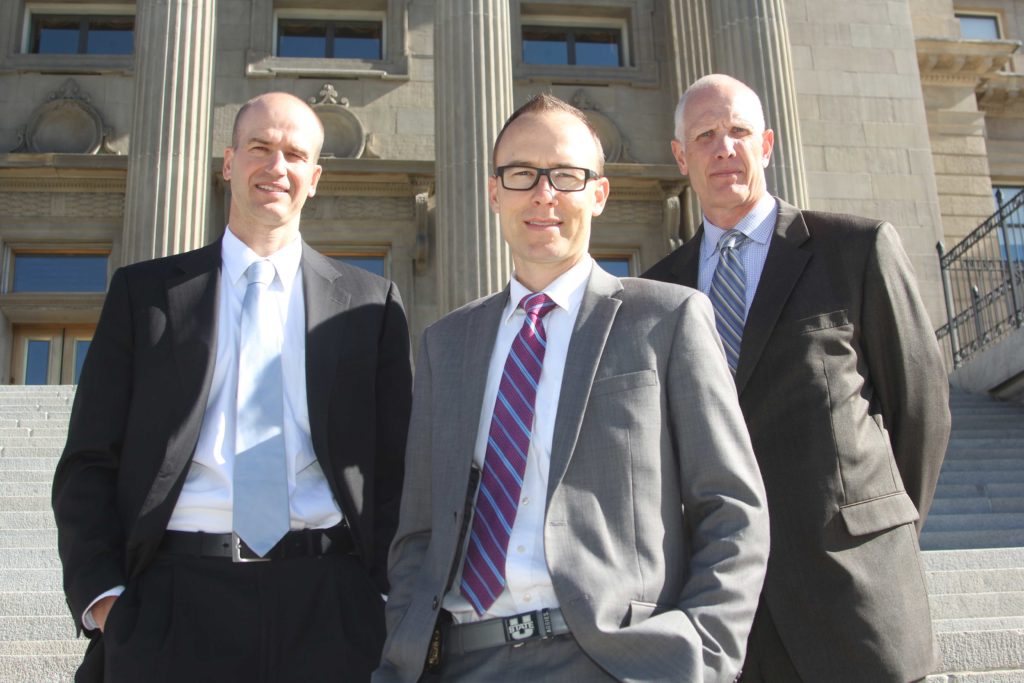 Drew McCandless was sitting in the audience enjoying his daughter’s concert at a school in the Boise area on the night of Oct. 16, 2015, when he sensed that something amiss.

An FBI agent for more than 20 years, McCandless’ trained eye realized that a man sitting in front of him was clearly becoming more and more agitated as he looked at his phone. Unable to discern what the problem was from his vantage point, McCandless did his best to continue to listen during his daughter’s performance while also keeping one wary eye fixed on the anxious individual. As the concert progressed, McCandless realized that the man was not alone. He took note of several other anguished persons also paying more attention to their phones than to the performance onstage.

“I could just tell that there was no excitement, and there was a lot of discomfort on the part of several people sitting around me,” McCandless recalls.

The former Utah State football player then adds with a big grin, “I think that must have been right about the time Utah State ran that interception back right before halftime to go up 45-10 [against the Broncos].”

Such is life as an “undercover” Aggie in Boise State territory on the historic night when USU upset the 21st-ranked Broncos.

Although he didn’t need it that evening, Drew McCandless ’90 has enjoyed plenty of Aggie backup during his time in Idaho.

Five of the 14 agents serving in the FBI’s office in Boise last fall are graduates of Utah State. In addition to McCandless, including Clark Harshbarger ’01, Jonathan Riggs ’02, MS ’03, and Jared Thompson ’01, MS ’03. Due to his status as an undercover operative, the fifth Aggie “Justin” asked that his real name not be used in this story. The veteran fivesome all took very different routes on their way to end up together in Boise, one of 18 satellite offices of the FBI’s Salt Lake City field office, which covers Utah, Idaho, and Montana.

A native of Rigby, Idaho, McCandless grew up attending Aggie basketball camps. So, when he started getting recruited to play football by former USU head coach Chuck Shelton, he says he already felt “comfortable” on the campus and ended up playing defensive tackle for the Aggies from 1987-90.

“I remember playing in the L.A. Coliseum against USC, and at Illinois when Jeff George was the quarterback,” McCandless says. “When you grow in a one-stoplight town like I did, it was really something to be able to play major college football in those environments.”

McCandless graduated with a degree in finance and worked for a finance company in Boise straight out college. But he hated it, “and wanted to do something more” with his life. After visiting the FBI office to talk about career opportunities, he completed training as a CPA and was hired by the FBI at the of 28.

“But after 9/11, things really shifted in the FBI, and for a year and a half I ended up working on money laundering cases involving terrorism and worked with agencies outside of the country like Scotland Yard in the United Kingdom and the Royal Canadian Mounted Police in Canada,” he says.

Harshbarger is the son of an engineer who graduated from USU and served in the U.S. Navy, which led to several childhood moves across the West. Harshbarger completed his bachelor’s in computer science and minor in mathematics at USU. Afterward he moved back East “to find a real job” but missed the mountains. About the same time he applied to the University of Alaska Fairbanks for graduate school, he sent his application into the FBI.

“And, lo and behold, I got sent to Anchorage for my first office,” says Harshbarger.

While in Alaska, Harshbarger completed his master’s in computer science and information security. After he was transferred back to the Lower 48, he worked closely with Utah State and other academic institutions as a computer intrusion specialist. But Hashbarger is hardly your typical desk jockey/computer nerd. A fitness fanatic who has biked to work for the past 16 years – “My cutoff in Alaska was 10-below and under,” he admits—he is also SWAT-certified and serves as a sniper.

“I never would have thought that,” Harshbarger notes. “Growing up, I never even shot a gun other than a rifle on my grandmother’s ranch. But if you’re humble and dedicated, the FBI can teach anyone how to shoot.”

That’s where Jonathan Riggs comes in.

A Tremonton native, Riggs attended USU after serving a mission for the Church of Jesus Christ of Latter-day Saints in the Dominican Republic. He ended up majoring in Spanish, then earned a master’s in Spanish teaching before joining the FBI, which loved his ability to speak another language.

Riggs worked on drugs, violent crime, and public corruption cases in  Arizona and Puerto Rico, before coming to Boise in 2012. Four years later Riggs returned to the FBI Training Academy in Quantico, Virginia, to serve as a firearms instructor to new agents.

He runs a violent gang task force out in Caldwell, He says he has seen an increase in the amount of gangs and drugs flowing into Idaho from California over the past two years.

Riggs and Thompson have a long history together, dating back to elementary school in the Bear River Valley.

“There was only one girl that I dated very steady in high school,” Thompson notes. “And she left me for him.”

Despite that bump in the road, Thompson and Riggs became roommates at Utah State, and it was Riggs who suggested that Thompson look into a career in the FBI after his old friend expressed some displeasure with his job at a huge accounting firm in New York City. 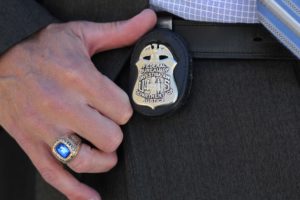 A native of Deweyville whose parents went to Utah State, Thompson served an LDS mission to New York City, before completing a bachelor’s and a master’s in accounting at USU. He returned to the Big Apple for his first job and  joined the FBI in 2008. After completing training at Quantico, Thompson was immediately assigned to – where else? – New York City, where he spent more than five years working white collar crime, including the high-profile case against fraudulent investment adviser Bernie Madoff.

During Madoff’s five-month-long trial, Thompson was informed of an opening at one of the offices he had expressed interest in transferring to, and that’s how he and his family ended up relocating from the most populous city in the United States to tiny Shelby, Montana.

“I didn’t really know anything about the area; I just picked a bunch of places in Idaho and Montana that were close to the mountains,” Thompson says. “So, I had the weekend to figure things out, and realized that I would be working violent crime on the Blackfeet Indian Reservation, which I had no experience with. It was beautiful country, but up there I worked rapes, assaults, and sexual abuse-type cases.”

Thompson spent three years in Shelby, which like Puerto Rico for Riggs, is considered a “hardship” location by the FBI, which allows agents to move onto a requested location after serving the requisite time. That’s how Thompson ended up in Boise in 2017 working complex financial crimes with McCandless, while also reuniting with his old friend, Riggs.

And while neither one of them ended up with that girl from Bear River High, Thompson and Riggs are both married with five children each. 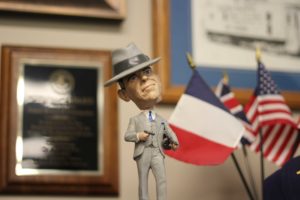 A bobblehead of the famous gangster John Dilinger sits on McCandless’ desk at the FBI resident agency in Boise.

“Justin” took possibly the most unusual route to a career in the FBI, working as a journalist at several daily newspapers and completing a master’s degree in creative writing at a university in Europe. He was 31 when he entered the FBI Training Academy. The average age for trainees is between 23 and 37 years of age (unless they are a veteran of the military).

A Utah native and star high school athlete, Justin was sent to Boston for his first assignment and spent nearly 11 years as a special agent in New England. He was there on April 15, 2013, the day of the Boston Marathon bombings, and it’s clear that his life hasn’t been the same since that deadly event and the intense manhunt that followed.

Due to ongoing appeals in the legal process, Justin says he can’t talk specifically about his role in the bombing investigation, but did state: “It was horrific to understand how someone could do something like that.”

“I went down there and saw the victims and the aftermath,” Justin continues. “FBI agents are human beings, and when you come face to face with someone who has been a victim of extreme physical violence, it can be very affecting.

“It was a truly tragic event that affected me deeply for a long time after that,” Justin adds, his eyes getting misty. “I watched the videos of the bombs being put down on the ground and set off. That’s what I’m talking about. The images of the people … dying.”

Last October, Justin, who was primarily involved with stopping drug cartels and crimes again children in Boston, transferred to Boise, where he works cases involving drugs, violent crime, and public corruption. He says his journalism background has been a huge help during his career, both as an FBI investigator and as someone charged with writing many reports.

Now in his early 40s, Justin recently got married, even though at the time he and his future wife were dating, he was investigating human trafficking cases and bringing a child pornographer to justice in a case that involved 150 victims.

“She has seen a very unromantic view of what law enforcement people in general go through,” Justin says. “People want to know what you’re working on … but they don’t really want to know.”

Whether it’s the buckle on Riggs’ belt or the class ring on McCandless’ finger, Utah State and Cache Valley are clearly still near and dear to all five Aggies agents in Boise.

“The FBI doesn’t have a resident agency in Logan right now, but if they do, there will be a long line of us putting in to go there,” Harshbarger declares.

And while most people are of the impression that you need to be in the military or in law enforcement to join the FBI, the diverse backgrounds of these alumni make it clear that is not the case. McCandless says he was recently involved with interviewing potential FBI candidates and of the “wide spectrum” of people, the two best applicants were a former Navy SEAL and a school teacher.

And Riggs says that on the firing range at Quantico, he encountered an Army Ranger, a chiropractor, a lawyer, and a nuclear scientist. “It’s just about having the ambition to serve your country, and having a fundamental desire to do something good on the behalf of others,” he says. “I think that’s what drives all of us. You’re not going to get rich being an FBI agent, but the job satisfaction is immense.”