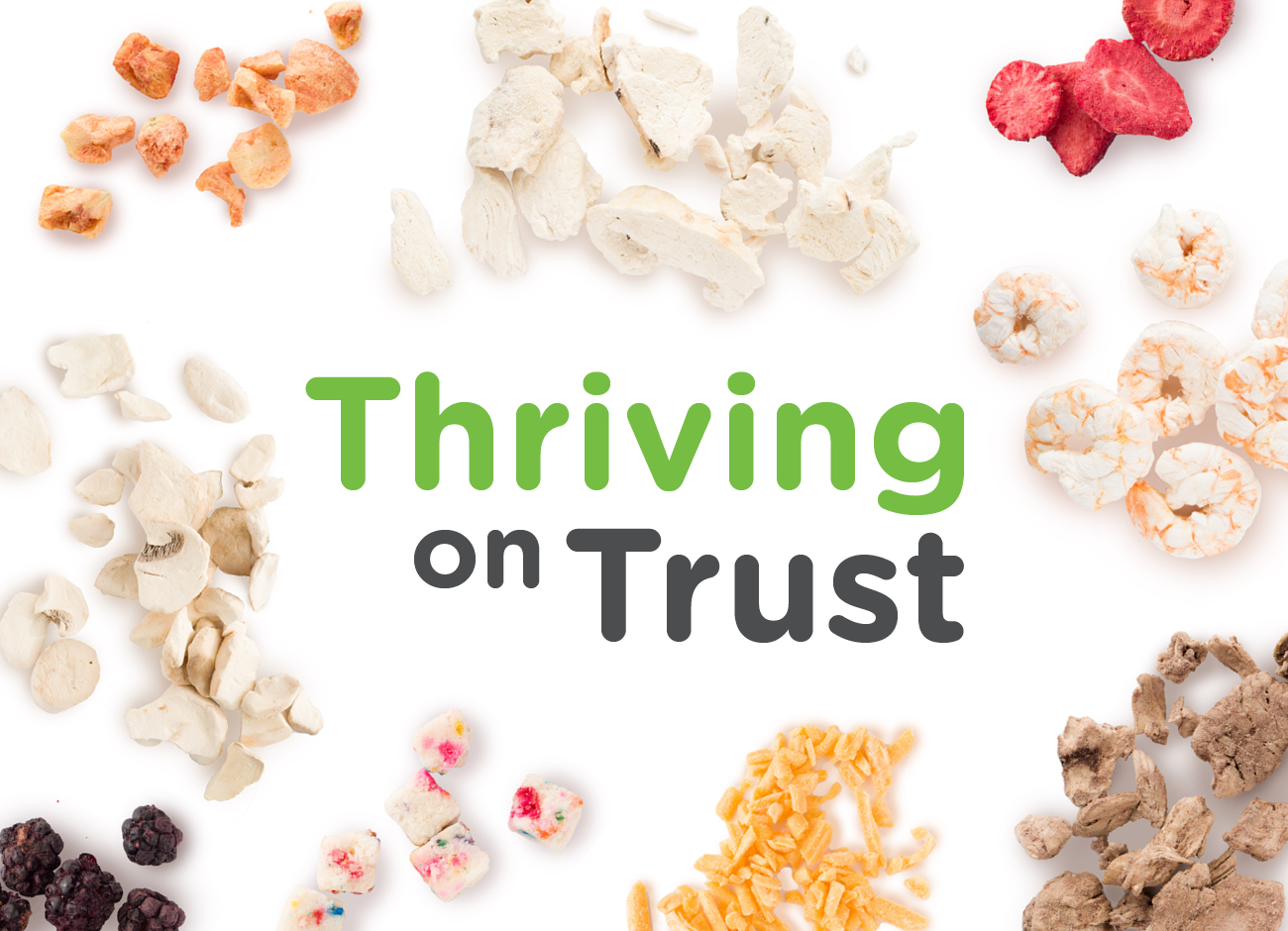 It seems every startup story begins in someone’s garage. Thrive Foods is no different.

Before the freeze-dried food empire had products in retail giants like REI and Costco, its founders began more simply — selling shelves for organizing one’s pantry. The original prototype was a contraption Jason Budge ’02 engineered to help rotate food supplies at home while waiting out an 18-month noncompete agreement with a pest control company.

“He stepped out of the garage and he looked like a mad scientist with sawdust flying behind him,” laughs Steve Palmer ’16, Thrive’s CEO and cofounder.

The hefty device gave the two college friends their first big break at Costco selling units on a trial basis. And while shelves took off locally, Budge and Palmer shifted to focus on the products on them.

“To be honest, we had no business putting food in cans,” admits Palmer from the floor of Thrive’s warehouse in American Fork, Utah. “If you had told me 20 years ago what we would be doing, I wouldn’t believe you. The science behind freeze drying foods is way over my head. It’s not rocket science, but it feels close.”

Speaking of rocket science, Thrive had a contract with NASA sending foods to the International Space Station. A few hundred pounds, Palmer says, not exactly fueling the company, but “how many berries can you eat in space?”

“We need to start talking to Musk,” he jokes.

Or is he? Palmer’s role at Thrive is scoring the big gets. He is the analytical wizard driving the company’s expansion while Budge is considered the creative heart. The Utah County company has about 200 employees and, in January, received backing by two private equity firms along with Mercer Foods, which specializes in freeze-dried fruits and vegetables.

Despite the growing investment in freeze drying foods, the technique is not new. Freeze drying is a slow dehydration method that uses low temperatures to freeze organic tissue, as well as reduced pressure to sublimate ice without damaging cellular walls so that foods retain their original shape and flavor. The process is the preservative.

Freeze drying can be traced to the Incas who stored foods high in the Andes Mountains, squeezed out the water at lower altitudes, and dried them. Freeze drying went commercial in the 20th Century to feed astronauts in space and troops on the field. Palmer and Budge wanted to bring it to the masses with emergency food rations.

“We quickly learned this is a Utah thing,” Palmer says. “Not everyone stores a lot of food.”

While Thrive initially found steady success in 2011, sales slipped two years later. Palmer and Budge realized that the emergency food market relied on factors outside their control — factors like who holds political office, the geopolitical climate, events like Ebola outbreaks, Palmer trails off. “Emergency food, although it has a place, it’s hard to forecast the next coronavirus, the next earthquake in Haiti. it’s also not a really good way to wake up in the morning.”

The next few years involved branching out to stabilize the company and make pivoting easier when markets shift. Thrive retained its emergency food line but added ones for probiotics, and pet food, and another for backpacking, including PEAK Refuel high-protein packaged meals.

“We use freeze dried as a platform,” Palmer explains. “Thrive Life is just one of our brands. If we’re going to survive as a company, we have to be very smart, very strategic in what we do.”

While equipped with six massive driers — each the size of a school bus — more are coming. Some of that expansion is driven, in part, by luck.

“We could not have been more positioned for success with the pandemic,” Palmer says sheepishly, adding that he suffers from “survivor’s guilt” because of it.

People got pets during the COVID-19 pandemic, went outside more, thought about their health, and began cooking from home. And many people have kept up these habits.

Luck is an ingredient. Luck, and including the right people.

Thrive is an Aggie enterprise. The company settled in Utah County where fans bleed a different shade of blue, but it “was founded on friendship and trust in Logan,” Palmer says. (He joined USU’s Board of Trustees in the fall.)

In the late ’90s, Palmer and Budge met in student government at Utah State University (Palmer was ASUSU president in 2001) and played in competing bands. Music connected them with Eric Morgan and Jason Norton, two Aggies who would eventually play pivotal roles at Thrive, too. But it’s not just the founders that have staying power at the company. The second person hired at Thrive — a guy who began packing boxes — now runs social media for the backpacking division. (The line got an unexpected boost after Joe Rogan mentioned it on his podcast.)

“You get to see these people that you love grow,” Palmer says.

There is a sense of real affection for the employees on the floor. As Palmer strolls through the warehouse in dark jeans and a navy sweater vest, he reassuringly squeezes the shoulder of a man driving a forklift. The man leans over and parts his hair, revealing a white scar from a recent car accident. Palmer leans in and says something inaudible. The man smiles and Palmer walks on through aisles actively being emptied to make room for the expansion.

“Part of being successful is knowing what you’re not good at,” he says when asked if he is a foodie.

Budge and Palmer hire the difference. Palmer opens a door to a testing center where Katie Hall is reviewing paperwork from a previous batch. She opens a small freezer, revealing a tray of alfredo sauce. Food scientists like Hall develop new products and test every freeze-dried batch for quality control. Most come out fine. But when they don’t, the team investigates what went wrong. Yesterday something did. Palmer asks Hall what she thinks the problem was. Likely too much cream in a recipe, she says.

“The best way for the culture to grow,” Palmer explains later, “is to not hide from mistakes.”

Hall is sifting through a drawer of sweet snacks of cookie dough, confetti cake, and cheesecake bites when Andrew Naylor, the company’s chief food scientist, walks in to chat about probiotics.

“His whole job is to keep things alive,” Palmer says.

Foods take from 6 to 55 hours to fully dry, and the probiotics take the longest because they need to be handled gently. Workers in the probiotics section wear bunny suits, gloves, and booties in the station to avoid cross-contamination of products — a $100,000 mistake.

“A lot of times you try to kill bacteria [in food]; this isn’t one of those things,” Naylor says.

Palmer heads upstairs to The Thrive Way room, a large, carpeted meeting area where the motto “We Fuel Life’s Important Moments” and principles of the company are painted on the walls. Off the room is a gym where an employee walks on a treadmill as snow pelts U.S. Highway 89.

Palmer phones Budge to see if he can make an appearance. A few minutes later, Budge enters the test kitchen dressed in a blue flannel shirt and jeans and smiling like he is both guilty and about to tell a joke.

In college we never set out to be entrepreneurs, he says.

The friends just knew they wanted to go into business together. They originally decided on pest control because it was a continuation of work they were already doing together. The shelves Budge built were his solution for his family’s food storage problem. They wondered if this could be their opportunity and called a local Costco to give a demonstration. Palmer calculated that they needed to sell 63 units a month to stay afloat.

Initially they had to do it all, from handling the finances, and sales, even construction and delivery of the units.

“In hindsight, it was a bridge to getting us where we are today,” Budge says.

The vision for Thrive’s future is coming into focus. While Budge sees further expansion possible, as the company has grown, so have the founders’ intentions. They considered what more to do with their money. On a personal note, Budge sees deeper involvement in the company’s philanthropic arm, Thriving Nations, a partnership to build more sustainable education and agriculture in a remote region of Kenya. On the business side, Budge sees increased domination of the market.

“When people think freeze-dried they will think Thrive,” he says.

It’s nothing the friends ever predicted. Even their own fathers doubted the business would work. When we started, our dads were flipping burgers at the opening and shaking their heads in doubt, Budge says, smiling.

In the end, Budge agrees with Palmer. Thrive’s success, while sustained by a willingness to hustle, has involved considerable timing and luck. And friendship.

“Business would be very difficult if we didn’t have this world of trust in one another,” Budge says. “Trust is the ultimate human currency.”