Home / Sci/Tech  / Following Her Nose to the Stars

Following Her Nose to the Stars

Mary Cleave’s moment of panic did not come during the 17,000 mph catapult into space, rather it was when she briefly struggled to pick out her navigational stars shortly after the Atlantis Space Shuttle began its six-day orbit on Nov. 26, 1985.

“WHAT YOU SEE is so incredibly overwhelming because there is so much more of it than you’ve ever seen before,” she says during a phone call from her home in Maryland. Once above the Earth’s atmosphere, there is no light pollution, no atmosphere to filter everything out. That meant a few anxious moments of not knowing exactly where she was before her eyes could “dark-adapt” to space. “There’s so much other stuff out there,” she says. “But after a minor moment of going, ‘oh, my god!’ I found them.”

A good thing, too, because as the flight engineer, she needed to know her positioning just in case the ship’s star trackers failed and she would be forced to do a manual coax calibration. “You’ve got to find your nav stars before you need them,” she says. “If you’re in a spaceship and your survival depends on getting home, you better figure out how to do it without a computer too.”

That is when it begins to sink in.

“It’s what you use when you’re out at sea trying to find your way around,” she says. “It’s the same in a spaceship. I mean they’re ships too, right?”

Right, which means you, Dr. Cleave, are not terribly different from the voyagers of old—explorers who sailed uncharted seas and looked to the very same stars for orientation. That means you—Utah State University’s first, and only, female astronaut—are among an elite group of planetary pioneers, and part of an even more specialized cohort of 40 American female space explorers—40 among billions of Earth inhabitants. You are only the 10th woman to fly in space, including two space shuttle missions. You mingled with moonwalkers, chummed with John Glenn, the first American man to orbit Earth, and worked closely with Sally Ride, the first American woman in space.

Cleave never set out to do any of these things for the sake of being first or best. “I didn’t even think about it,” she says. “I was just doing what I wanted to do. I mean, my parents had to be very understanding people because I was a very strange little girl.”

She preferred playing with model airplanes over dolls. By the time she was 17, she earned her pilot’s license, even before getting her driver’s. She also preferred to fly fast, especially high performance T-38’s, the world’s first supersonic jet trainers with a 2,500-pound engine thrust and spine-tingling afterburner.

She preferred playing with model airplanes over dolls. By the time she was 17, she earned her pilot’s license, even before getting her driver’s. She also preferred to fly fast, especially high performance T-38’s, the world’s first supersonic jet trainers with a 2,500-pound engine thrust and spine-tingling afterburner. It would be nearly 15 years from the time Cleave first started flying these speedsters in 1980 before Jeannie Flynn would train on them to become the Air Force’s first female mission qualified fighter pilot in 1994. Cleave would not wait.

She was working at USU’s Utah Water Research Laboratory as a microbiologist in 1979 when a colleague pointed out a NASA advertisement that he saw hanging in the Logan Post Office next to an FBI Most Wanted poster. NASA was seeking engineers and scientists to work on its expanding space shuttle program. “Mary, you know this sounds like you’re the only engineer working here who is nuts enough to want to do something like that,” he told her. On a whim, she applied, mostly because those in the astronaut corps were required to maintain currency in T-38s—male and female. “That was my avenue,” she says. By May 1980, she became an official NASA astronaut, among only the second class of shuttle astronauts hired. “It was a great job. Yeah, good time!” 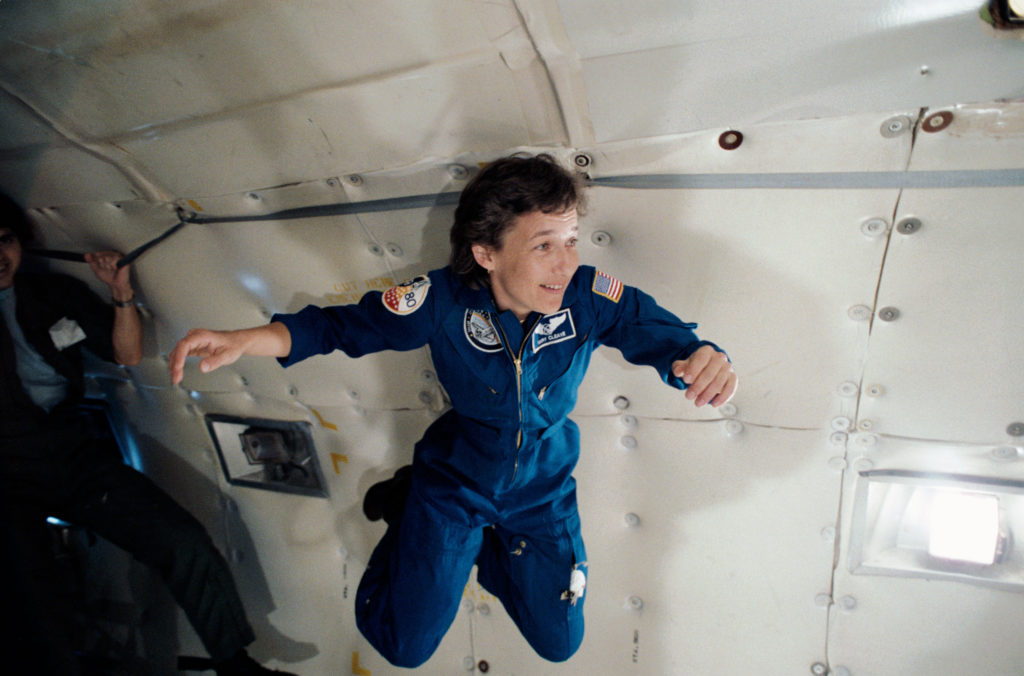 Mary Cleave flew two shuttle mission—STS-61B (1985) and STS-30 (1989). She worked with NASA Goddard in the 1990s and eventually as Associate Administrator for Science at NASA Headquarters. Here she is during her 1985 training on the “vomit comet.” Images courtesy of NASA.

Good timing, too, thanks, in part to the 1972 passage of Title IX. Its passage not only gave women athletes opportunities to compete, but also gave women co-equal educational opportunities leading to jobs like with NASA. “I was extremely lucky, because I was just on the leading edge of things changing for women,” she says. But not before being turned down by Cornell after graduating high school in the mid ’60s with a full-Regents scholarship.

She loved animals and thought she would like to become a veterinarian. Cornell told her that they would accept her for any major other than pre-vet because they could not risk giving those slots to women. There was a shortage of vets at that time, and “women will just get married and won’t practice veterinary medicine,” they told her.

She went to Colorado State instead, where she finished her pre-vet training, graduating in 1969 with a degree in biological sciences. Despite good grades, she still could not get into Cornell’s veterinary school due to her gender, she says. It was while she was preparing for graduate school that she chanced upon USU. She first thought about attending the University of Utah and drove to Salt Lake City visit a professor. Having grown up in Southampton, near New York City, it seemed like just another large city, so she thought about Bozeman instead. “I was literally going up to Montana State when I dropped into Cache Valley,” she says. “It was June. There was snow on the mountains, and the valley was green. And as I was driving past Utah State University, I thought, ooh, this looks great.” She pulled in and made a beeline to the botany building where she ran into Herman Wiebe, a faculty member in plant physiology. “And I ended up living there for a decade,” she says. “I mean, you know, follow your nose.”

In the process, Cleave became one of the first women, if not the first, to earn a doctorate in Civil and Environmental Engineering from USU. This came after some prodding by Joe Middlebrooks, dean of the College of Engineering at the time, who told her she was too impatient to be a good scientist. “And I told him he was out of his mind because there weren’t women in the College of Engineering graduate program then,” she says. “But he was absolutely right. Every 10 years I’ve got to change what I’m doing, and, you know, not just on an academic level, but on a personal level too.” 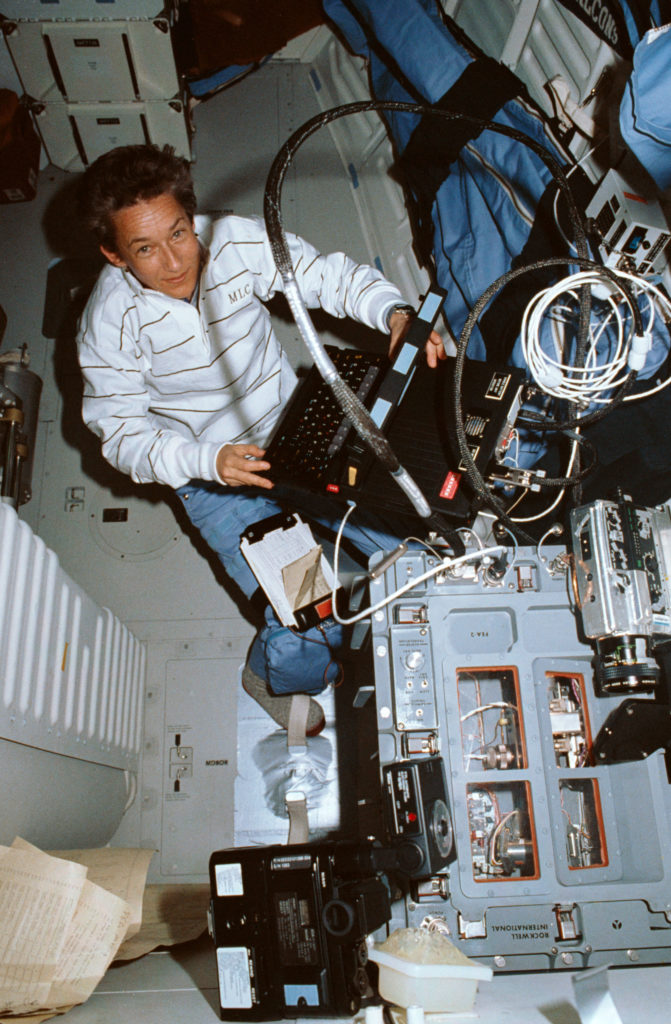 Which is why, at 72, despite her official retirement from NASA in 2007, she is still at work, choosing the research projects she wants and the people with whom she wants to work. That includes her current OPAL project with USU’s Space Dynamics Laboratory mapping global thermospheric temperature variability. It also includes some very down-to earth volunteer work she is doing with organizations such as the League of Women Voters helping to organize candidate debates in her county. “I’m paying back, because they are the ones that got Title IX passed,” she says. “These women have been basically working on this for years and years, and they’re not giving up.”

Her own female heroes were the “cowgirls” from Colorado State who lived in her dorm. “They were tough broads!” she says. “I had never been around women that were tough before, and it had a huge impact on me. Huge.”

Apparently, enough for her willingly to be strapped to a pair of solid propellant rocket boosters on two occasions propelling her nearly 4 million miles through space. Her sister inherited the anxiety genes in her family, she says. “I don’t worry about stuff. I just think, ooh, that’d be neat.”

It is this sense of wonder, combined with trusting her instincts, that led her to USU and her advanced science and engineering degrees. Her comprehensive plant-life measurements of Earth from space, the first of its kind, was “a perfect match” with her research at USU. Research such as her studies of carbon uptake in cryptogrammic crusts of western deserts, as part of her master’s, to establishing the effects of oil shale leachate on phytoplankton in the Colorado River, for her Ph.D. She even put her water lab expertise to good use by solving a potable water issue while orbiting the Earth, and relied upon her engineering skills to fix a broken shuttle toilet. Her crewmembers were so grateful that they presented her with a plaque afterwards that read: “The best man for a job may be the woman.”

And whether up in space or down on Earth, exploration of both are of equal importance to her. “I don’t differentiate between the two,” she says. “As I see it, you got to understand your neighborhood, or you’re going to get into trouble.” On her second shuttle flight in 1989, she helped deploy Magellan, one of the most successful planetary missions ever launched. Since arriving at Venus in 1990, it went on to map 95 percent of what was once a wet surface, which is why Enceladus, the sixth-largest moon of Saturn covered by fresh ice is where Cleave wants to explore next.

“You know, I’m a water quality guy, so follow the water.”