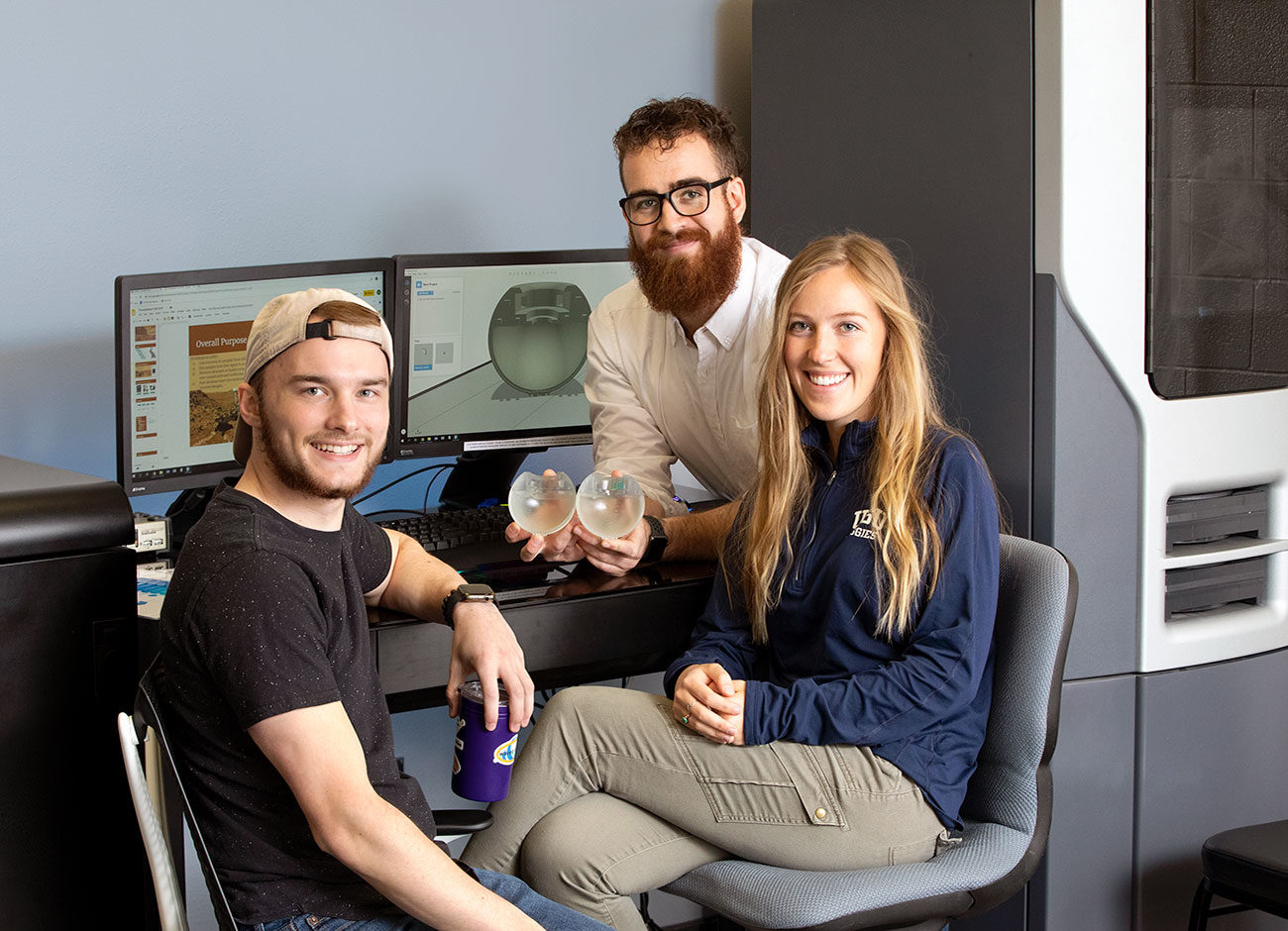 In six months, NASA’s newest rover will launch from Cape Canaveral Air Force Station to the Jezero Crater, a dry lakebed on Mars to discover if life ever existed on the red planet.

The rover will roam windswept sand dunes and ancient rock beds collecting samples for a future mission to bring to Earth. But what if the rover had a tool that could analyze the samples on site? The following is a conversation with senior bioengineering students Lindsey Bach, Michael Einreinhof, and Bailey McFarland who devised a sonicating device aimed to do just that.

How will this device work to find life on Mars?
Bailey McFarland: When you are trying to detect life on Mars you are primarily looking at things that are in a dry state because there is not much moisture on Mars. But it’s very hard to detect some of the signs of life like amino acids with just dry chemistry. So we are trying to work with NASA to develop a way to take soil samples, hydrate them, and to have them be integrated with the systems that they already have as a way to perform some of the wet chemistry analysis on Mars.
Lindsey Bach: We are working on a small mechanical portion of it. Unfortunately, we won’t even get to the soil science part of it because this project could take, realistically, 15 years. The novelty of it is that it’s going to be in one unit—the collection, the extraction, the analyzing. If a sample from Mars were brought back for analysis, it could risk a lot of the integrity of the sample and introduce extraterrestrial material to Earth. The main idea is to contain it all in one unit.

How did you wind up on this project?
Michael Einreinhof: Two years ago I was trying to get an internship with NASA and reached out to see if there were any researchers at NASA Ames with projects that they would like to have free labor on. One came back that we are using as our senior design project.
LB: Our senior capstone design project is a partnership with industry usually fostered by our professors’ connections. This is the first year our department has worked with NASA, thanks to Michael.
BM: Biological engineers aren’t often seen as the type that would be designing a device, but we have backgrounds that line up nicely with this project. Michael has experience with electrical engineering and programming, Lindsey has done DNA extractions, and I have done a lot of mechanical design.

NASA isn’t planning to send a crew to Mars until the 2030s. You have some time.
ME: [laughs] We have until December.

What are some of the tests you are performing on it?
LB: I’m doing a vibrational analysis to see where the pressure points will be on Earth conditions. Obviously long-term you would have to analyze for Martian conditions because there is going to be extreme pressure and temperature differentials and it will take a toll on the mechanical design of it.
BM: We want to test the efficiency of recovering the soil samples from the drill bits. We 3D printed them so we have the actual dimensions of the part and are testing with soil samples that are as close to Mars soils that we can get. We are trying to integrate with the system that will recover samples from that drill bit because that is one of the hardest parts. Mars can be very cold, but there is some moisture and if you are going to try to get core samples in conditions like polar deserts, it could end up freezing onto the drill bit.

Is it going to work?
BM: I’m confident it will work. How many iterations it takes before it works the way we want it to, is going to be interesting.

Did you envision working on a project for NASA?
ME: It was always my goal.
BM: It’s kind of surreal to know I am working on a project to try to help detect signs of life on other planets. While Mars is the most immediate target, there are a couple of other moons of Saturn that are perspective options for this.
ME: Titan, Europa …
BM: If you have a good drill system for core samples and a way to get a liquid extract reliably off that, this applies to any mission where you are trying to analyze the composition of soils or ice or anything you can drill into. So even if we are just a small part of this …
ME: Our role in this is crucial since we are the upstream device where our device feeds everything else that will analyze the sample. It’s crucial that it works. Our main challenge throughout this is having a budget of zero dollars. But throughout that, we have managed to get by. We are actually soaring.
BM: With a project like this that is very design based, we have the resources on campus to be able to sit down at a computer and create something that solves a problem, do 3D prints, and get any of the physical parts we need.

What led you all to study bioengineering?
ME: My childhood goal was to augment humans to better survive space.

You were thinking about this as a kid?
ME: I was always into the game Halo—augmented humans that are super soldiers—and I want to morph that into a real-life thing. Even if I don’t succeed at it, just getting the ball rolling. Because I see us traveling to different planets within the next 1,000 to 2,000 years and we can’t survive space well. We get bone degradation. We get muscle atrophy. We are exposed to radiation due to the radiation in space. That’s what attracted me to bioengineering.
BM: I really like the fact that we find things in nature that we cannot do. I came to Utah State specifically because of the spider silk lab. I started doing research there my first week on campus. When you look at biology and look at what life has already done, you see some of the most amazing things. And to try and use that to try and solve problems is really why I got into biological engineering.
LB: I started in environmental engineering, but I switched over to biological because you have that option with going environmental. For instance, last summer I worked at a water treatment company. I liked the idea of being able to benefit humanity whether it is having clean water or by working for a biomedical company.
BM: A lot of the problems in biological are more wide reaching.
ME: Because everything deals with biology.