Right now, on campus, there is a place where pineapples are growing and goldfish are swimming.

Right now, where Brian Daines is hanging out and thinking about flowers—50,000 of them that he plants and tends every year. He is a landscaper by title, but landscape artist by trade. And if one considers the Logan campus landscape, with its famous flora and fauna, to be the face of the university, he is a makeup artist too, for his job is to accentuate the beauty—a blush of begonias here, a highlight of marigolds there. A Trip Advisor reviewer says he was initially skeptical of all the superlatives about the campus grounds. “Well I was wrong,” he wrote in his Aug. 2, 2019 review. “The Utah State University campus lives up to these reviews, and then some. It is one of the most lovely college campuses and looks like something that Disney would create if Disney built a college.”

The heart of the magic kingdom lies in the central greenhouse north of Maverik stadium where Daines is prepping for the coming season. It is on the campus equator where ferns thrive, bananas grow, and peace lilies ponder. It is a good place to get him in the mood to be thinking about flowers, for soon enough, the long rows of greenhouse beds, not far from his desk and swimming goldfish, will burst into colors.

He especially loves the salvias—his go-to plants—but it is the thousands of pansies, with their yellow, white and purple sunny-faced petals, that announce to students the return of spring. It is an impressive feat considering that Daines accomplishes most of this with a slim crew of six part-time students planting, weeding, mulching, thinning, pruning, culling, fixing, and fussing from early spring to late fall. You have to drive to USU’s botanical gardens in Kaysville and on to Temple Square in Salt Lake City to see an equivalent of colorful blooms. It is the Temple Square gardens, famously designed by Peter Lassig, that gives Daines his inspiration. That, and plenty of Mountain Dew, especially in the spring, he says. He is content to let the flowers garner all the attention while he remains behind the scene. It was while he was in high school that he began working on the grounds crew. He has seen a lot crews—and flowers—come and go since. What remains is his love of place and the students he thinks about with every seed he plants. They may not notice him, but he is there, crouching with trowel in hand among the blossoms of daffodils, bluebells, and forget-me-nots. 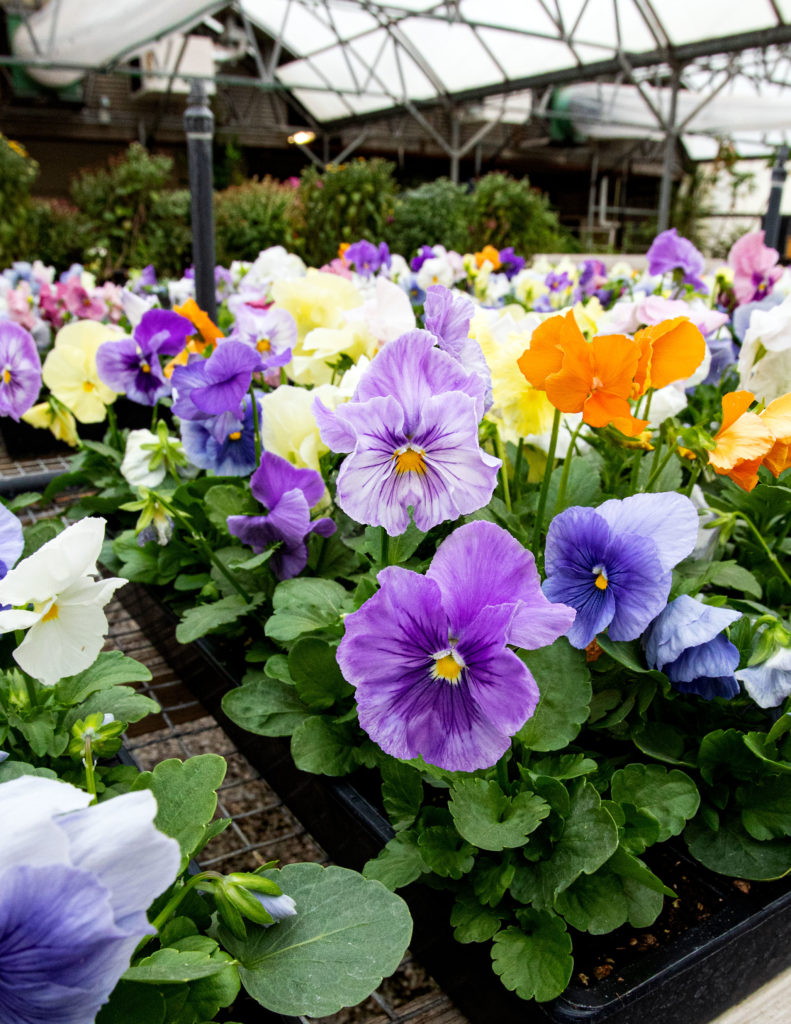 These horned pansies (top) started off in this greenhouse just north of Maverik stadium before being put to bed for the winter in one of the dozens of flowerbeds across campus. They are some of the first flowers to watch for when the snow begins to retreat. 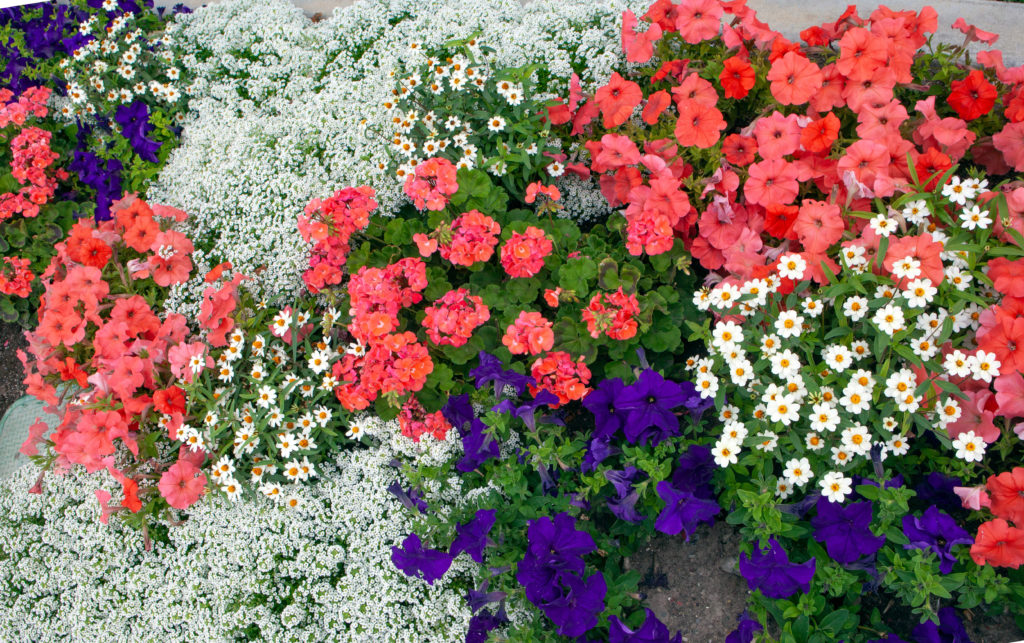 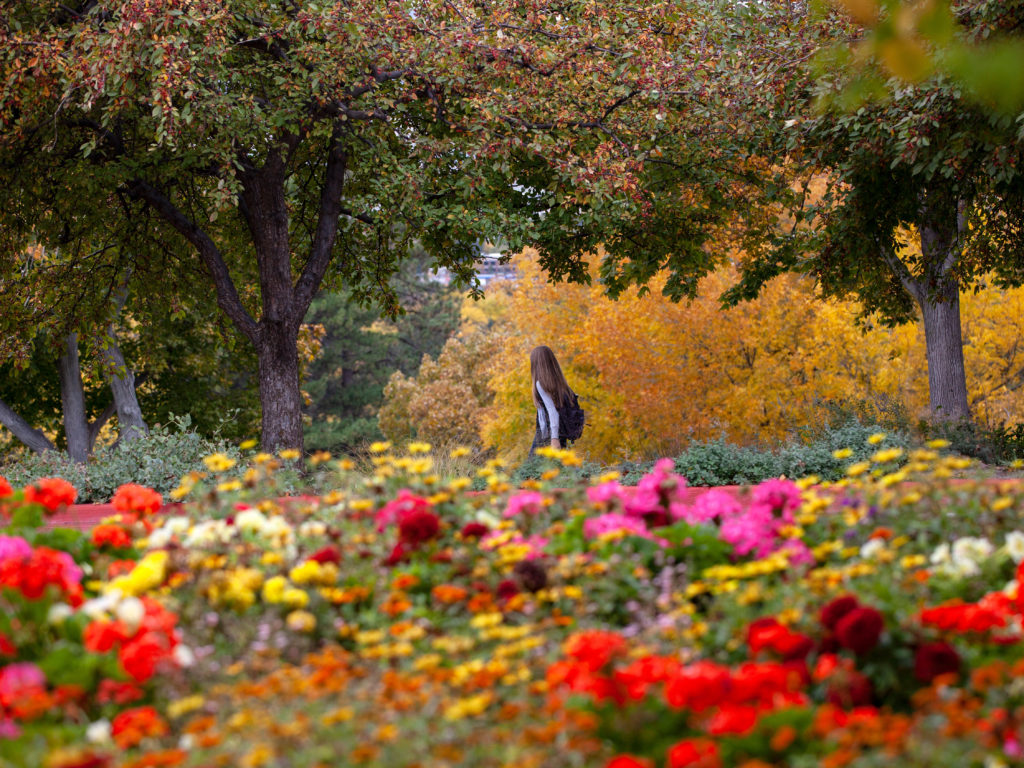 She walks in beauty, as do all who find themselves on the Logan campus. For Brian Daines, USU landscaper and flower guru, he is always thinking about colors and getting just the right combination of petal flourishes. 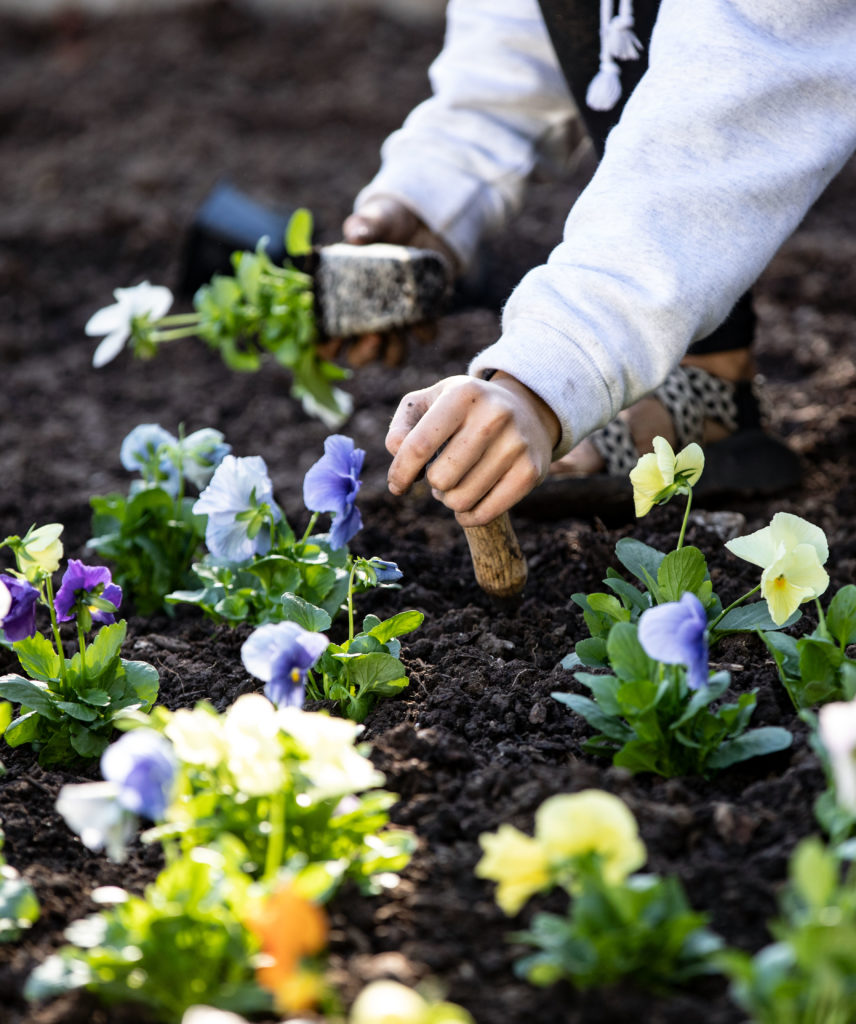 A crew of six part-time students helps plant some 50,000 flowers across campus each year. 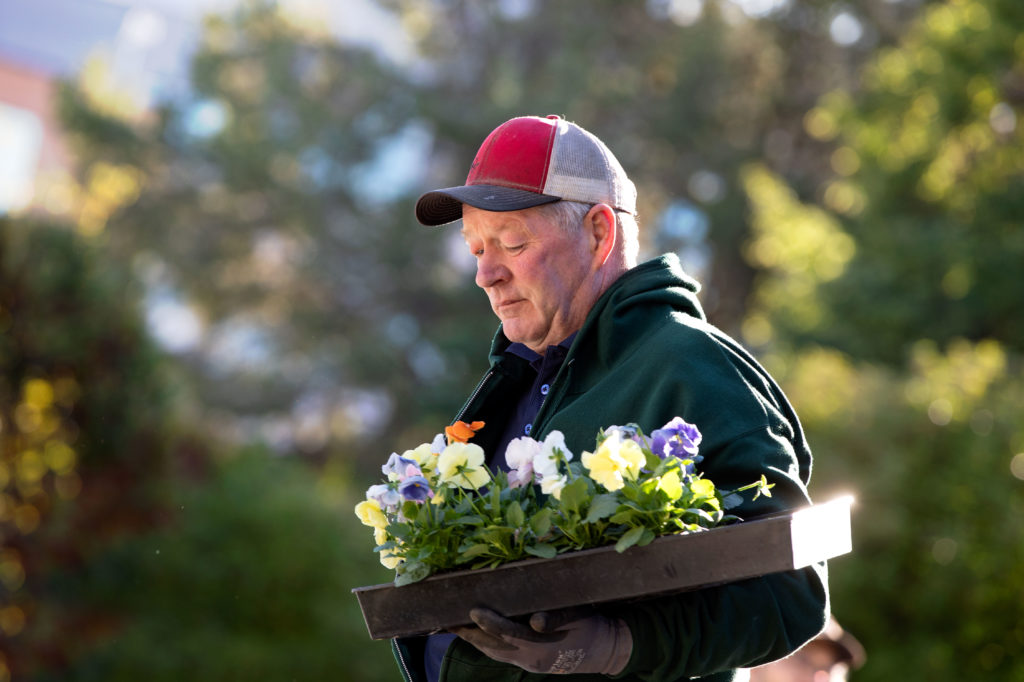 It is early fall, but for Brian Daines, it is spring that he cradles in his arm as he prepares campus beds in
October for their April blossoming. He plans the flowers he will use based on colors and how much care they
require. For that reason, he likes blue salvias, but marigolds and petunias are his main flowers of choice.

Pollinators also abound, like this little bee on a bitter sneezeweed.